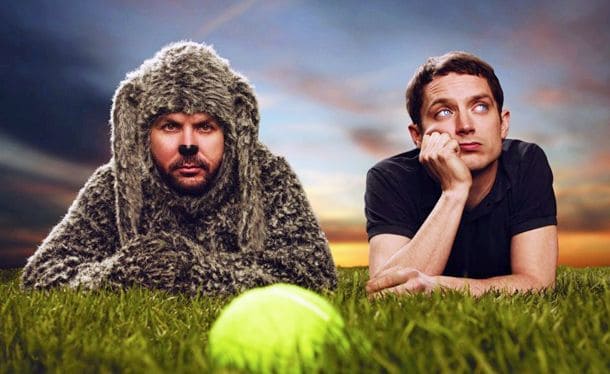 FX’s WILFRED is a series about a man figuring out who he is. Sure, there’s a guy in a dog suit that speaks to the protagonist, but as strange as the premise and stories sometimes are, the real heart of the show is finding yourself. It’s much more about how one gets to who one is than the end result. In the season three premiere tonight, “Uncertainty,” that’s what Ryan (Elijah Wood) attempts to do.

Each installment of WILFRED focuses on another part of Ryan’s psyche he must delve into and deal with. For a mentally healthy person, it’s rarely a bad idea to reflect and examine one’s own mind. For someone as unstable as Ryan, it’s a necessity. Only by figuring out who he is and forcing himself to mature and accept the world can he become a whole, happy person.

“Uncertainty” is actually an issue many completely sane people have trouble wrapping their heads around. After all, we are driven to know things for certain, and people tend to try to make connections or conclusions, even if there isn’t an easy one to be found. Ryan’s “Uncertainty” comes about concerning the existence of Wilfred(Jason Gaan), the man in the dog suit, whom everyone else sees as a normal dog.

At the end of season two, Ryan finds a picture he drew as a child that somehow features a cameo of Wilfred. A photograph proves Wilfred was always in the picture, not added later. Is Wilfred only in Ryan’s mind? Is Wilfred an immortal magical creature? These are just two of the possibilities pondered in this season premiere. The answer isn’t revealed, nor does one expect it to. That will come at the series’ end, if at all.

Now, this half hour does not mess with one’s mind nearly as much as last year’s opener, in which reality wasn’t even clear to the viewer. Instead, it’s a more subtle, but just as interesting, quandary as Ryan digs into Wilfred’s past. Toss in The Office’s Angela Kinsey, Gaan delightfully pulling double duty on screen, and some hilarious historical tragedy gags (yes, you read that right), and it’s a very solid, very good season premiere.

I wish WILFRED chose only to air one episode tonight. Unlike most modern series, WILFRED is not one that should be consumed in a binge fashion. Each installment gives viewers something to ruminate on, both about the show, and about themselves. “Uncertainty” is such a terrific episode, I’d like time to digest it. So I recommend TiVo-ing the second half hour that will air this evening, “Comfort,” and watching it a day or two after you see the premiere.

That being said, I watched them back to back, and still found much to enjoy about both. In “Comfort,” Ryan looks for a place he can feel safe and secure. It’s not with Jenna (Fiona Gubelmann) and Drew (Chris Klein), who worry about him and try to set him straight. It’s not with Wilfred, obviously. So when a mailman (Zachary Knighton, Happy Endings) wants to hang out, Ryan accepts.

It’s a bad decision, to be sure, and not just because dogs like Wilfred and postmen are natural enemies, as this particular mail carrier is the opposite of a good influence. However, the fact that Ryan separates himself from a bad situation, and refuses to allow himself to have his decisions made for him, does show some growth. Ryan has become more assertive over the past couple of years, and this shows in “Comfort.”

Luckily, Ryan’s friends do want what’s best for him, and can back up when rebuffed. I very much enjoy the dynamic between Ryan and Jenna, especially now that it seems there will never be anything romantic between them, since she is happily married. It’s a little strange for a television show to not try putting its leads together, but she’s a good friend, and that’s what Ryan needs on his journey to self-fulfillment.

WILFRED is not my favorite show on television, but it’s a unique one that I never miss. It’s dark drama, intermixed with a touch of comedy, but not in an obvious way, makes for a compelling half hour, and there’s always much more going on than is visible on the surface. “Uncertainty” and “Comfort” are excellent examples of WILFRED’s quality and style, indicating that season three will be at least as good as the first two.