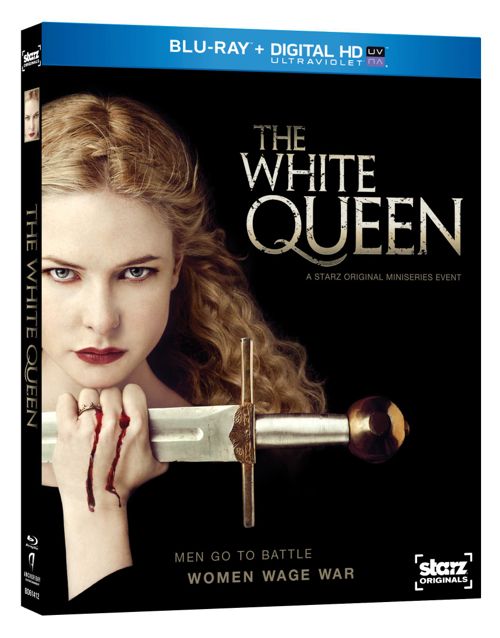 Seat42f and Anchor Bay Entertainment have teamed up to give TWO lucky winners a copy of THE WHITE QUEEN on BLURAY. For a chance to win leave a comment below telling us why you want to add THE WHITE QUEEN to your BLURAY collection. Only one entry per person. Contest ends February 11th. Winners will be notified on February 12th via email so make sure to use a valid email address when you post your comment.

Get ready for a truly royal battle of wills. Anchor Bay Entertainment releases the acclaimed Starz Original mini-series “THE WHITE QUEEN” on a three-disc Blu-ray™ with Digital HD Ultraviolet™ and DVD set February 4, 2014 – allowing consumers to watch it anywhere, on any device, any time! Based on Philippa Gregory’s series of best-selling novels, “THE WHITE QUEEN” is a vivid re-telling of the classic War of the Roses family feud (York vs. Lancaster) from the viewpoint of the women involved. The set contains all 10 gorgeous episodes of the drama, plus a bountiful supply of bonus features. SRP is $59.99 for the Blu-ray™ with Digital HD Ultraviolet™ and $49.98 for the DVD.

“THE WHITE QUEEN” is a riveting portrayal of one of the most dramatic and turbulent times in English history. A story of love and lust, seduction and deception, betrayal and murder, it is uniquely told through the perspective of three different, yet equally relentless women – Elizabeth Woodville, Margaret Beaufort and Anne Neville. In their quest for power, they will scheme, manipulate and seduce their way onto the English throne.

The year is 1464, before the Tudor dynasty ruled the country, and war has been ravaging throughout England over who is the rightful King. It is a bitter dispute between two sides of the same family, The House of York and The House of Lancaster.

The House of York’s young and handsome Edward IV is crowned King of England with the help of the master manipulator, Lord Warwick “The Kingmaker.” But when Edward falls in love with a beautiful Lancastrian commoner, Elizabeth Woodville, Warwick’s plan to control the throne comes crashing down. A violent, high-stakes struggle ensues between Elizabeth, her most fierce adversary, Lancastrian Margaret Beaufort, and Anne Neville, the pawn in her father’s power game – each woman vying for the crown.