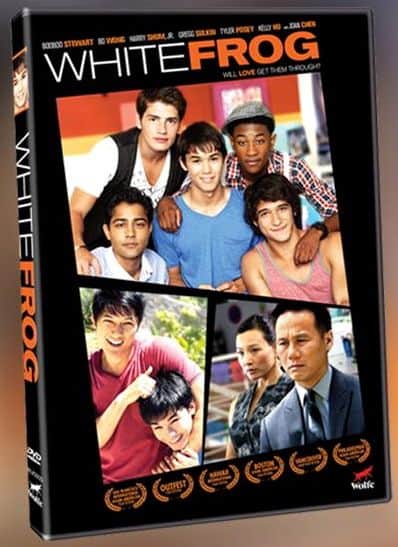 Seat42f and Wolfe Video have teamed up to give THREE lucky winners a copy of WHITE FROG on DVD. For a chance to win leave a comment below telling us why you want to add WHITE FROG to your DVD collection. Only one entry per person. Contest ends July 24th. Winners will be notified on July 25th via email so make sure to use a valid email address when you post your comment.

SYNOPSIS:
Chaz Young (Harry Shum Jr.) is the perfect son, the most popular kid in school, headed for Stanford, and unconditionally adored by his upwardly mobile parents (BD Wong and Joan Chen). His younger brother Nick (Booboo Stewart) lives in his shadow, brilliant but isolated by his Asperger’s Syndrome. At home, Chaz keeps the peace between his father and mother while running interference for Nick, who is barely acknowledged by his conservative parents. When Chaz dies in a tragic car accident, the family spirals into disarray. In an effort to keep his brother’s memory alive, Nick tentatively reaches out to Chaz’s school friends to try making sense of his untimely death. In doing so, Nick quickly realizes that his brother had a secret life. The truth of his brother’s life will change his own forever.