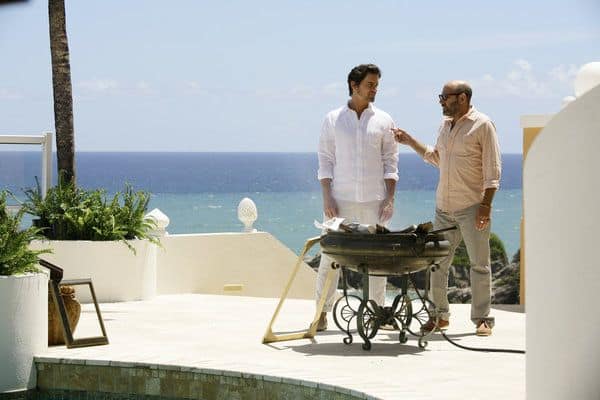 USA’s WHITE COLLAR is back! In the season premiere, “Wanted,” Agent Collins (Mekhi Phifer, Torchwood, ER), a ruthless man who doesn’t care if Neal (Matt Bomer) is caught dead or alive, begins the hunt. Collins’ big break, of course, comes when he searches Peter’s (Tim DeKay) house, as Peter has already found where Neal is hiding out. Collins flies to the island hideaway with Peter on his heels. Will Peter be too late?

“Wanted” begins a little slow for Neal. He is comfortably ensconced in his new home, hanging out on the beach with best friend, Mozzie (Willie Garson), and wooing a beautiful coffee house proprietor (Mia Maestro, Alias). He struggles with being honest towards the new people in his life, a lesson he learned he must do to make real connections during these past couple of years in New York, while maintaining the secrecy that will keep him a free man. There isn’t a lot of action, but I think that’s kind of the point, showing Neal finally relaxing in a peaceful environment.

In fact, even after Neal gets the call from Peter that Collins is on his tail, Neal doesn’t seem particularly worried or upset. Why should he be? Peter is the only man who has managed to catch Neal before, Peter isn’t actively looking for him now, as far as Neal knows, and his tracks are well covered. There is no reason for Neal to think that he can’t just enjoy his new existence.

In the meantime, Peter is anything but at ease. While he’d like to bring Neal back legally, resuming their partnership, the more immediate concern is Collins, whom Peter believes will hurt Neal. This is something Peter can’t allow to happen. So, with the help of Jones (Sharif Atkins) and Diana (Marsha Thomason), Peter begins yet another hunt for Neal, this time with the goal of protection, rather than capture.

Neal’s fatal flaw is making the call to Peter. This would not have been a mistake he would have made in the past. But then again, Peter was the threat in the past, so Neal wouldn’t have let anything slip to him. Believing he can trust Peter, Neal doesn’t disguise anything on the call, not perceiving a threat. This makes it easy for Peter and company to find him, but that’s not a concern for Neal.

Neal is partially right, as Peter has no intention of capturing his ex-partner to send him back to jail. However, Peter also makes a mistake by leaving evidence in his home, making it easy for Collins to gets his hands on Peter’s findings. Was there any way that Peter could, or should, have predicted this turn of events? Not really, even if viewers can see it coming from a mile away.

Thus, Peter and Neal are both too trusting in their relationship. It may be what makes them strong when the goal is to catch criminals, but it weakens them when they are trying to avoid other law enforcement. This isn’t a bad thing, per se, as Collins is working for the good guys, as bad as he might be. The problem is, there are other bad guys besides Collins corrupting the powers that be, and trusting the system may not work in the name of justice this time.

“Wanted” ends on a heck of a cliffhanger! Again, it’s something that isn’t hard to see coming as a fan, but might be understandable that the characters don’t think about or plan for it. The twist keeps this story from being a one episode adventure before reverting back to formula, so that’s always a welcome development, no matter how sad the situation is left.

USA shows have been getting braver and braver in recent years, no longer confined with cases of the week. “Wanted” is a good episode that isn’t forced to follow the typical path. Based on the ending of “Wanted,” it appears that next week’s episode will be the same. The longer WHITE COLLAR avoids going back to the status quo, the more respect it will earn as a drama series. Not that the earlier seasons of WHITE COLLAR are not good television, because they definitely are. This is just the natural next step, showing a welcome evolution of story and characters.

Besides Maestro and Phifer, “Wanted” features Gregg Henry (Hung, Bunheads) as the man protecting Neal and Mozzie on the island. It’s an exciting premiere, and one fans will not want to miss.