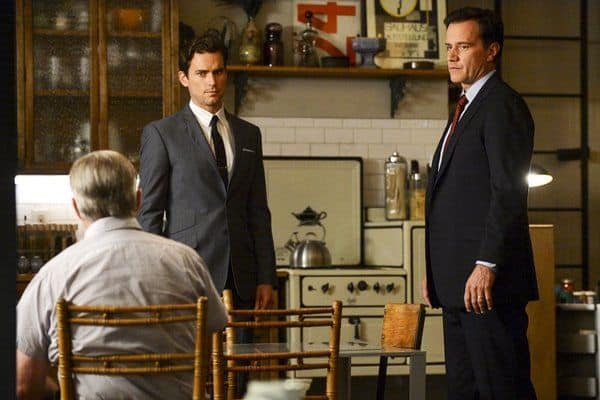 USA’s WHITE COLLAR resumes this week with “Family Business.” When we last leave our heroes (back in September’s fall finale), Peter (Tim DeKay) and Neal (Matt Bomer) are beginning to rebuild their trust, and Neal finds out that the man he believes to be named Sam is actually Neal’s father, James (Treat Williams). Plus, there’s the little matter of bringing Ellen’s killer to justice, who Neal believes to be Dennis Flynn.

WHITE COLLAR flirts with larger arcs from time to time, but mostly sticks with a case-of-the-week format. I want to complain, because I hate procedurals on principal. Yet, WHITE COLLAR manages to pull off these cases with great skill, often integrating them into the larger story, which keeps them from being dull or feeling all the same. They’ve been successfully doing so for years now, and the most recent installment is no exception.

For instance, in “Family Business,” Neal and Mozzie (Willie Garson) go undercover with the Flynn family. The duo fakes booze and special bottles for the booze to go into, with the clear understanding that the episode will end with the bad guys being arrested. This is totally in keeping with the expected formula. However, the fact that the Flynn family is very involved in Neal’s back story, and Neal is intent on pinning more than just counterfeiting on them, to Peter’s displeasure, the caper means something more than just going after a random criminal.

Now, don’t get me wrong; WHITE COLLAR knows how to make a con interesting. Even were the Flynn connection not present, I’d enjoying watching Neal and Mozzie work together, especially when getting drunk while concocting a fake whiskey. Their chemistry is highly enjoyable, and the writing for them is smart. I’m just saying, it means more when things go a little deeper.

The trust does seem to be mostly restored between Peter and Neal this week, which is a slight disappointment. Previous episodes develop a huge gap between them, their partnership badly wounded, which finally begins to heal a bit in the previous episode. This one takes place pretty much right after the last, but because of the months in between air times, the writers probably assume we’ve forgotten just how precarious the relationship is when last we see them. I have not, and I’m sure I’m not the only one.

We can tell that Peter trusts Neal again because he lets Neal go undercover, even though Peter knows Neal is too close to be at the top of his game, and the agent doesn’t automatically call things off when Neal crosses a line. Yes, Peter is ticked off, as usual. But when Peter stopped trusting Neal, he kept a tighter leash. Seeing Peter give Neal a little more slack is a sign that things are normalizing between the pair. This is what I want, what all fans are hoping for, but it comes just a little too easily.

“Family Business” addresses the bond between Neal and James. Now that James’s secrets are out in the open, the two can begin to talk honestly, and decide if they want to have a relationship. James definitely does, but Neal isn’t so sure, not in small part because he feels conned by James since James let his son believe that he was Sam.

How James begins to make up for this, and what James reveals about the crime he is accused of, I will not spoil. Suffice it to say, this episode does have some flashbacks that satisfactorily keep James from being a total scumbag. There is a door left open that I would like to see Neal walk through that leads to a real father-son style relationship. If WHITE COLLAR chooses to go there or not, well, that remains to be seen. At least it hasn’t been shut down right out of the gate.

“Family Business” is a good way to come back, catching us up on the bigger arcs, giving some family drama and mythology to the major characters, and still delivering a fun con job that results in a bad guy being taken off the streets. That last bit isn’t a spoiler; it happens in just about every episode of the show. This is WHITE COLLAR in good form, the way it’s best enjoyed.