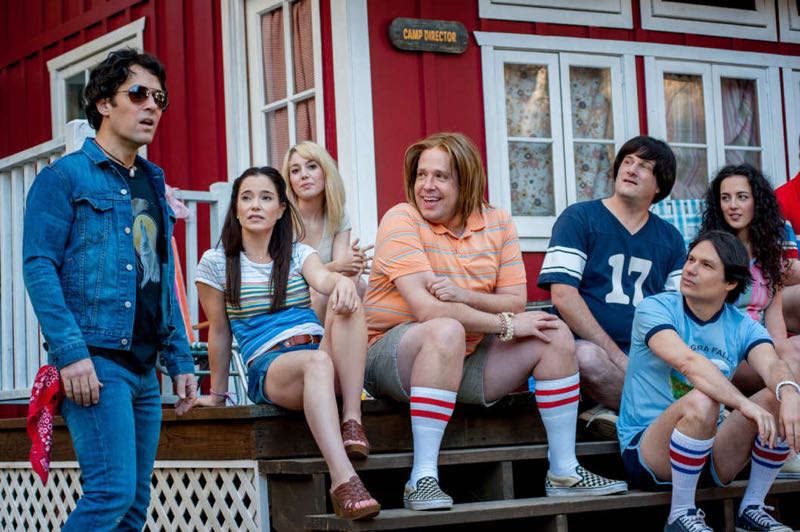 I love that we live in the modern age where television can be done in many different models, not just the strict, twenty-some episodes per year for an indeterminate number of years commitment. If things had not been shifting as they are, we would never get a gem like WET HOT AMERICAN SUMMER: FIRST DAY OF CAMP (premiering this week on Netflix) due to actor availability alone. Just look at the cast list, which includes Janeane Garofalo, Jason Schwartzman, Paul Rudd, Chris Pine, Elizabeth Banks, Christopher Meloni, Amy Poehler, Bradley Cooper, H. Jon Benjamin, John Slattery, Josh Charles, and many more. It would not have been possible to get them all together in a longer-format series.

WET HOT AMERICAN SUMMER: FIRST DAY OF CAMP is actually a prequel to the 2001 film, Wet Hot American Summer. Whereas the movie covers the last day of the year at Camp Firewood, the eight-episode series is set eight weeks earlier, to the first day of the season. Practically all of the adult actors from the original, both major and minor characters, reprise their roles, with a new batch of kids tossed in, and a ton of guest stars who are often as famous, if not more so, than the central cast.

The question might occur to you, as it did me, is this necessary? The movie is terrific; I just re-watched it last night and laughed frequently. But it’s also irreverent, with a loose plot and relatively under-developed characters. It succeeds because of the jokes and the performances, not because of its depth.

Well, if the new version were an exact copy, I’m not sure it would work. Sure, we could enjoy a goofy sitcom over a longer period of time, but it would certainly get tiring if binge watching, as many Netflix subscribers prefer to digest their shows. Instead, WET HOT AMERICAN SUMMER: FIRST DAY OF CAMP builds a much more complex story (i.e. can of vegetables), interweaving a number of running subplots, intriguing mysteries, and origin stories fans may not have known they even wanted.

Lest you worry that will take away from the style of humor that worked for Wet Hot American Summer, it does not. The silly gags are still present, Arty (recast) still the radio station, and the characters are the same as they ever were. They just have a little more to do, and what they do sometimes (but not always) has a little more importance. Continuity remains intact, as much as it ever was.

Given the short bits this four-hour comedy is broken up into, not everyone can show up right away. Most of the biggest stars are back in episodes one and two, with a lot of the smaller ones joining in episode three. The original ensemble is supplemented mostly by cast members from writer David Wain’s other TV show, Childrens Hospital (which also has Wet Hot American Summer stars), and Mad Men alum, along with Wain himself, so it takes even longer to get around to everyone.

Yet, it doesn’t feel crowded. Sure, Michael Ian Black, for one, doesn’t have a lot to do in the first few installments, but I’m optimistic that will change as the season goes on. Like the movie, WET HOT AMERICAN SUMMER: FIRST DAY OF CAMP jumps around a lot, and that allows for lots of subplots.

Most importantly, though, it just feels like the magic is back. True, the actors don’t pass for sixteen-year-olds, but they didn’t in 2001, either, and the only adds to the conceit. I was enjoying the show so much, I couldn’t stop to write this after one or two episodes, and barely tore myself away after the third. As someone who loves the film, I think this iteration adds to, not takes away from, the work. I hope we eventually get to see even more of this terrific summer of 1981.