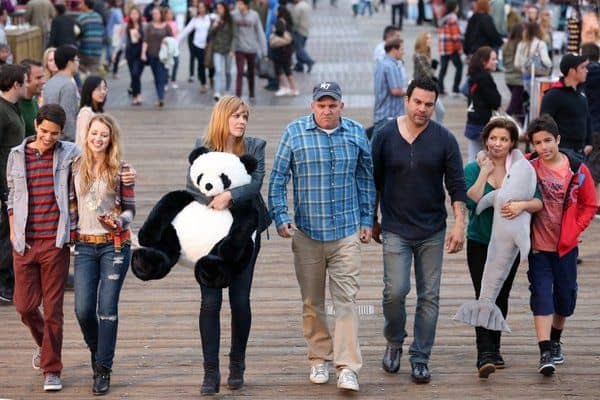 NBC tosses another family-centered sitcom into a very crowded field this fall with WELCOME TO THE FAMILY. Valedictorian Junior Hernandez (Joseph Haro, Awkward.) is surprised to learn that his barely-graduated girlfriend, Molly Yoder (Ella Rae Peck, Gossip Girl), is pregnant. But not as surprised as their families are when they finally meet one another.

There is nothing about WELCOME TO THE FAMILY that is original or fresh. It is the melding of two groups of people who dislike each other, rubbing one another the wrong way in a comic style that will soften as the series goes on. The culture-clash and the parent-child relationships are familiar and predictable. Plot “twists” are seen coming from a mile away. And even those that aren’t (such as the big one at the end of the first episode) don’t seem surprising in the context.

Yet, I did find myself enjoying the “Pilot,” despite these glaring flaws. The reason must be the cast, which has oodles of charm, and the writing, which remains amusing, even as it is uninspired. The show goes for the guaranteed laughs, but they’re laughs all the same.

WELCOME TO THE FAMILY’s “Pilot” pretty much belongs to the patriarchs. Mike O’Malley (Glee) plays Dan Yoder, the free-wheeling, non-controlling daddy, while Ricardo Chavira (Desperate Housewives) is Chuey Hernandez, the proud papa who fulfills the role of dad his father never did. Unfortunately, the two men get off on the wrong foot before they even realize their kids are dating during a first meeting that seems far too contrived.

Dan and Chuey are the main focus of this premiere. Yes, their kids have to deal with a pregnancy, but they have to deal with one another. The series understands that it has two great male leads who can carry the story on their own, and thus gives them more than their share of the first half hour, banking on their charm and humorous competition with one another to draw viewers. This gamble may just work out for them.

Though, Ricardo and Mike aren’t the show’s only weapons. Despite having much less to do in the “Pilot,” their wives are equally talented actresses. Caroline Yoder (Mary McCormack, In Plain Sight) and Lisette Hernandez (Justina Machado, Private Practice) pretty much get along right away, of course, because the calm, rational wives have to balance their crazy husbands in these types of series, so their subplot is small and uninteresting. However, McCormack and Machado are better than what they get to show in the premiere installment.

For a series to have any legs, the episodes will have to diversify away from the central conflict, and the rest of the ensemble will be required to pull their weight, too. With these particular ladies in the major roles, I have no doubt that it will not be a problem.

I also have to give props to Peck and Haro. Peck stands out, even in such a familiar trope, and earns her own place in the cast, balancing being stupid with actually being aware of her mental limitations. And Haro is appropriately earnest as the boy who wants to do the right thing, even if it means giving up his dreams of college and career, which seem secondary to him right now, just wanting to be happy with his girl.

Both characters are pretty one-sided in the “Pilot,” but surely that will change in later episodes. That good news is, I like them already, and if they have even a little bit of depth in them, they should be OK. In time, they might even be as interesting as their TV parents.

Junior also has a younger brother named Demetrio (Fabrizio Zacharee Guido), but he is mainly set dressing in the “Pilot.”

Also, props to the hashtag #wttf as a way to reference the show. Not super novel, but edgier than I would have given ABC credit for.

In short, WELCOME TO THE FAMILY is nothing that critics will fawn over nor awards will flow to. But it’s a well-made situation comedy about two families coming together, populated with an experienced, highly talented cast. In this, it should do well enough.

WELCOME TO THE FAMILY premieres Thursday, October 3rd, or watch the “Pilot” now on Hulu.