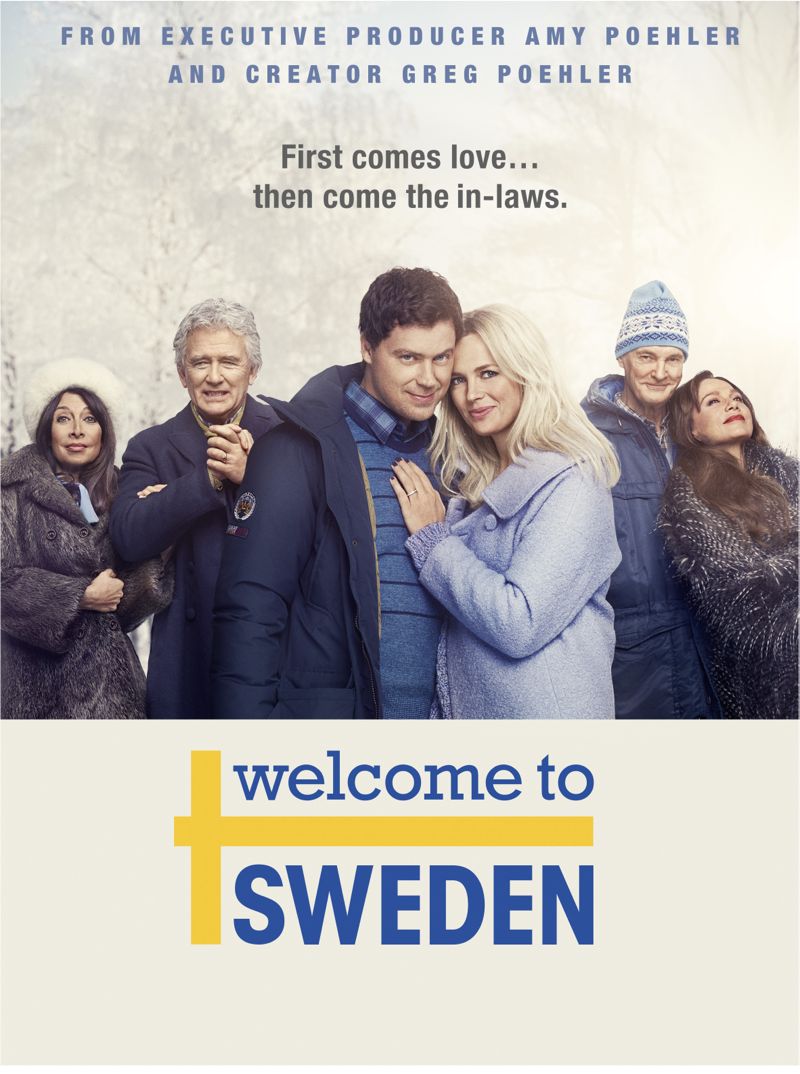 Seat42f and Entertainment One have teamed up to give THREE lucky winners a $10 iTunes Gift Card so they can download new episodes of WELCOME TO SWEDEN. For a chance to win leave a comment below telling us why you want to add WELCOME TO SWEDEN to your Digital collection. Only one entry per person. Contest ends August 4th. Winners will be notified on August 5th via email so make sure to use a valid email address when you post your comment.

For the funniest trip you’ll take this summer, tune in to the second season premiere of NBC’s hit single camera sitcom “Welcome to Sweden” on July 19. And, the day following the debut of the acclaimed series from executive producers and siblings Greg & Amy Poehler (“Parks and Recreation”), punch your passport for more laughs as co-producer Entertainment One (eOne) will release the premiere episode to download or stream on all leading digital platforms. Additional episodes will be released weekly following their broadcast premieres.

Based on Greg Poehler’s true-life story about Bruce, a New York accountant who falls in love with a Swedish girl, Emma, and follows his heart to Sweden, the series is NBC’s second-most-watched summer comedy in the last 10 years. And, this season, the series welcomes Jason Priestley (“Call Me Fitz”, “Haven”, “Beverly Hills, 90210), Jack Black (Kung Fu Panda, School of Rock) and Paul Simon as themselves and Neve Campbell (Scream, “Party of Five”), who joins the cast in a multi-episode story arc as Diane, an American who gets transferred to Stockholm for work as the head of marketing at Emma’s bank. Against the backdrop of a cold, dark and icy Swedish winter, season two follows Bruce and Emma’s engagement as they navigate unexpected career transitions, unfamiliar customs and meddlesome relatives.

In support of the returning sitcom, eOne also invites comedy lovers and aspiring comedians to enter the “Laugh Your Way to Sweden” Video Contest. Searching the nation for the best original comedy short (up to :60 seconds in length) with the “Fish-Out-of-Water” theme, videos will be voted on by the public at LaughYourWayToSweden.com. The top 10 videos with the most votes will move on to the final round where they will be judged by a celebrity panel, including cast members Greg Poehler, Illeana Douglas, Patrick Duffy, Jason Priestly, Neve Campbell and others. One grand prize winner will be awarded a trip to Sweden for two and an exclusive visit to the Stockholm-based “Welcome to Sweden” set to meet the cast. Additionally, the winning video will appear as a special bonus feature on the SEASON TWO DVD. The LaughYourWayTo Sweden.com contest runs through July 31.

“Welcome to Sweden” is a co-production between TV4, Entertainment One Television (eOne), Syskon, Jarowskij and Entertainment One. Created by Greg Poehler and based on events in his life, he serves as executive producer along with Amy Poehler, Fredrik Arefalk, Carrie Stein, Josephine Bornebusch, Iréne Lindblad, Lisa Dahlberg and Jessica Ericstam. Johanna Bergenstråhle is producer.