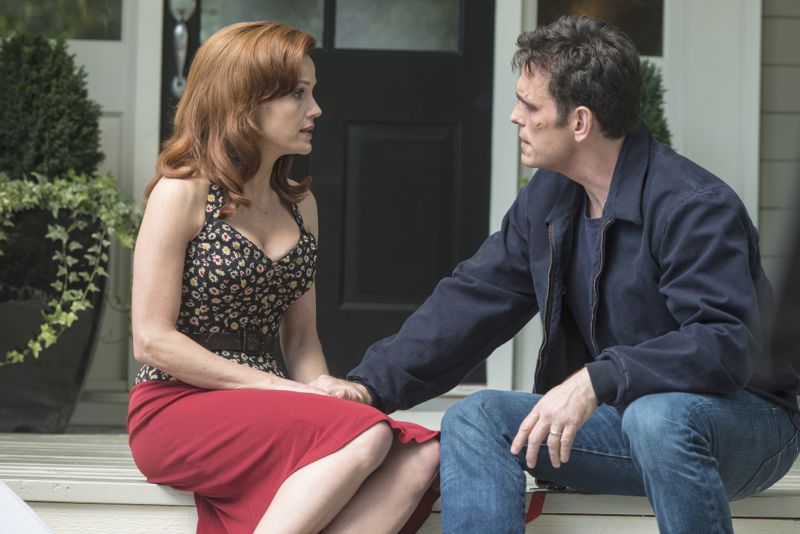 WAYWARD PINES, premiering this week on FOX, is the story of a Secret Service agent who, while looking into the appearance of two fellow agents, becomes trapped in a mystery-laden town. Produced by M. Night Shyamalan (The Sixth Sense) and based on the book series by Blake Crouch, it’s a dense thriller that poses far more questions than it answers, at least initially.

My first impression is that Wayward Pines is trying too hard. The pilot, “Where Paradise Is Home,” rips off the beginning of Lost; you’ll know immediately what I’m talking about when you see it. Except, instead of being set on an untethered island or trapped under a dome (like CBS’ Under The Dome, which it will compete with this summer), it takes place in the small town of Wayward Pines, Idaho – a place that is completely isolated in a valley, cut off from the rest of the world. So yeah, it’s just like those other two, at least in this one regard.

Our hero is Ethan Burke (Matt Dillon, Sunlight Jr., Wild Things), and “Where Paradise Is Home” revolves around him, telling a disjointed, nonlinear story. He’s married to a woman named Theresa (Shannyn Sossamon, Mistresses), but cheated on her with his former partner, Kate (Carla Gugino, Entourage, Watchmen), who shows up where you might not expect her. Almost immediately, he makes a connection with a bartender named Beverly (Juliette Lewis, Secrets and Lies, Christmas Vacation), so I guess perhaps hero is too strong a word. Let’s just call him the protagonist.

What does any of that have to do with the story? Well, something. There’s a Truman Show-esque twist that ties Ethan’s messy love life into the town, but to what end, I have no idea. Nor do I know why someone says Beverly isn’t really a bartender, nor why Nurse Pam (Melissa Leo, Treme, The Fighter) acts in such a sinister manner, nor why Sheriff Pope (Terrence Howard, Empire, Iron Man) won’t help, nor why Reed Diamond (Franklin & Bash, Moneyball) has been cast as a toymaker. The only thing that makes much sense is Toby Jones (Captain America) playing a psychiatrist, which seems perfectly natural.

I love dense, genre mystery shows. If you give me a solid cast and a well-thought out story, I couldn’t possibly be any happier watching television. I’m much more reticent to jump into WAYWARD PINES than others of its ilk, though. Part of it is that they are selling themselves as a “Twin Peaks-like” drama and stealing so much from other stories along the way. Now, some of that may come from the book; I haven’t read it so I don’t know. But the way the program is presented doesn’t even feel like those involved are trying to do something new.

It also concerns me to see the cast list. They’re almost universally strong performers, so that makes me think perhaps I should give the material a chance. But part of being so strong is that many of them have other jobs on currently running shows. Wayward Pines season one is announced to be only ten episodes, and presumably, subsequent seasons could be equally short to allow scheduling to work out. I just can’t see all of these people agreeing to stretch themselves so thin over any extended period of time, though.

WAYWARD PINES has a lot of good ingredients. The question will be, did the chefs take some liberty with the recipe, tossing in the unique spices that will make it a fresh and delicious dish (like Lost), or did they follow the book exactly, making something bland and derivative like Under The Dome? The answer to this will be what makes or breaks this show.