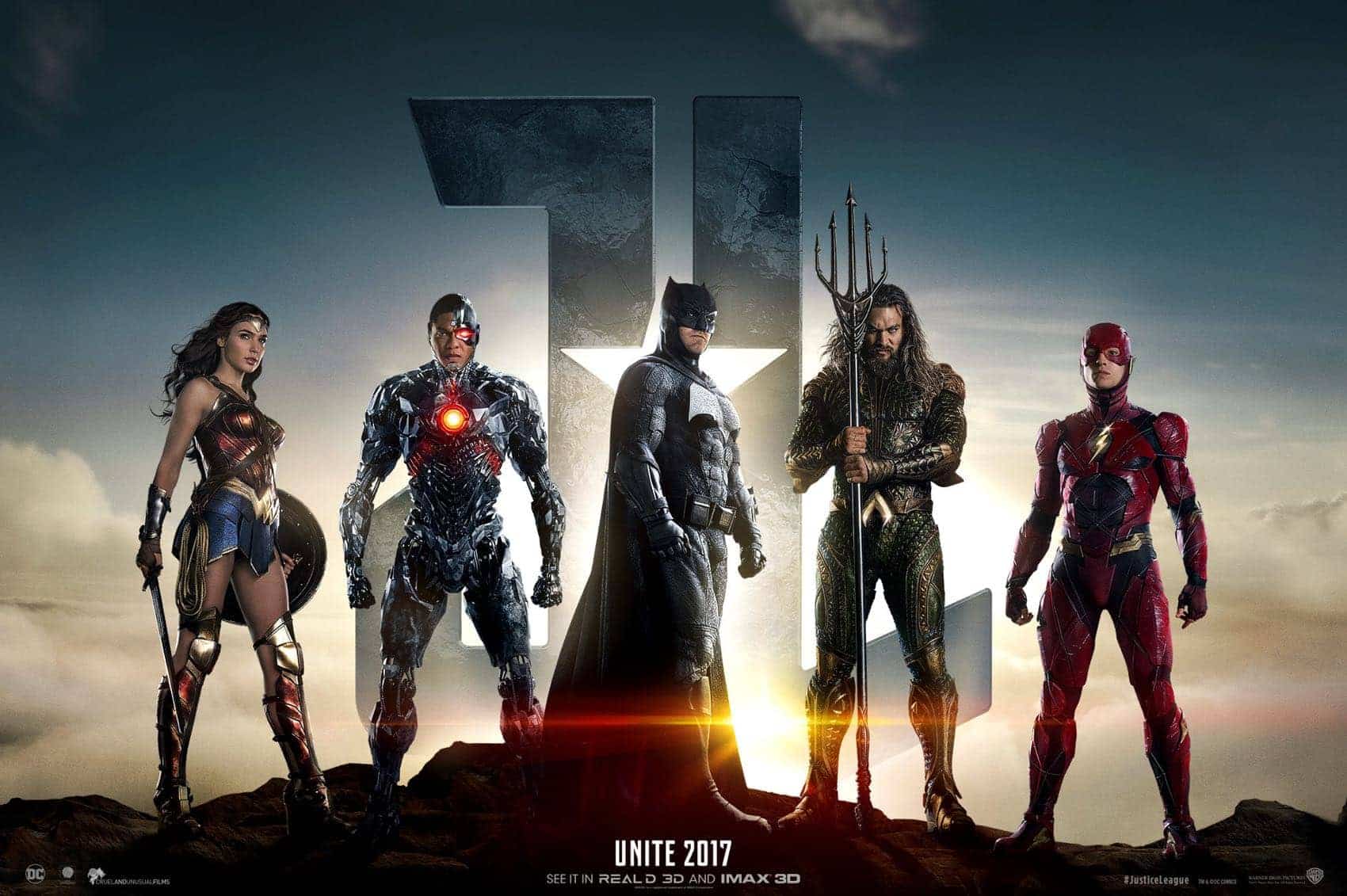 Warner Bros. Pictures brings some of its biggest films and brightest stars to this year’s Comic-Con International: San Diego. The announcement was made today by Sue Kroll, President, Worldwide Marketing and Distribution, who stated, “Every year we look forward to Comic-Con and every year we—along with our wonderful actors and filmmakers—eagerly share our enthusiasm for the upcoming Warner Bros. slate. Coming off the success we’re enjoying with ‘Wonder Woman,’ we are more excited than ever to interact with the fans, thank them for their ongoing support, and give them a taste of the incredible films we have for them in the coming months and into 2018.”

On Saturday, July 22, beginning at 11:30 a.m., Warner Bros. will light up Hall H with a presentation showcasing some of its eagerly awaited upcoming releases, with exclusive footage and revealing conversations, helmed by master of ceremonies Chris Hardwick. The lineup includes:

In addition to the Hall H presentation, Warner Bros. will host several activities and activations throughout the convention and around the town. Starting things off on Wednesday, July 19, the Studio will frighten fans with a screening of “Annabelle: Creation,” the newest feature in New Line Cinema’s “Conjuring” horror-verse, which debuted out of the Los Angeles Film Festival with a score of 100% Fresh on Rotten Tomatoes. The screening will take place at the Westfield Horton Plaza and will be followed by a Q&A with director David F. Sandberg and stars Stephanie Sigman, Talitha Bateman, Lulu Wilson and Anthony LaPaglia.

Keeping the scares going strong, on Thursday the 20th and through the weekend, brave fans can hop on the creepiest school bus in town: an “IT”-inspired virtual reality installation that will have them skipping school for the foreseeable future. The bus and FLOAT: A Cinematic VR Experience will be located at the Interactive Zone across from Petco Park—no badge required.

On Thursday evening, attend a panel for “The LEGO® NINJAGO® Movie” in the convention hall’s room 6A, with stars Dave Franco, Justin Theroux, Abbi Jacobson, Olivia Munn, Kumail Nanjiani, Michael Peña and Zach Woods and producer Dan Lin. Attendees will receive an exclusive, movie-themed giveaway. And for an hour each day during the convention, fans looking for a good stretch before standing in their next line can head to the lawn at the Omni Hotel to participate in “NINJOGA,” a tai chi/yoga-like workout for the ninja in everyone. The class begins at 10 a.m., Thursday through Sunday.

Also launching on Thursday, and open through Sunday, is the Blade Runner 2049 Experience, an immense, immersive and interactive multimedia installation that replicates the film’s environment. It will be positioned outside of the Convention proper in the Gaslamp Quarter—no badge necessary.

And finally, following the Hall H presentation on Saturday, fans can hit the convention floor for talent signings in the Warner Bros. and DC booths, starting at approximately 12:15 p.m.

About “Ready Player One”

From director Denis Villeneuve comes Alcon Entertainment’s science fiction thriller “Blade Runner 2049,” the much-anticipated sequel to the acclaimed sci-fi film “Blade Runner.” Thirty years after the events of the first film, a new blade runner, LAPD Officer K, unearths a long-buried secret that has the potential to plunge what’s left of society into chaos. K’s discovery leads him on a quest to find Rick Deckard, a former LAPD blade runner who has been missing for 30 years. The film stars Ryan Gosling, Harrison Ford, Ana de Armas, Sylvia Hoeks, Robin Wright, Mackenzie Davis, Carla Juri, and Lennie James, with Dave Bautista and Jared Leto. The film was produced by Andrew A. Kosove and Broderick Johnson and Bud Yorkin and Cynthia Yorkin. Ridley Scott, who directed the first “Blade Runner,” served as an executive producer, together with Tim Gamble, Frank Giustra, Yale Badick, Val Hill, and Bill Carraro. Villeneuve directed the film from a screenplay by Hampton Fancher and Michael Green, story by Fancher, based on characters from the novel Do Androids Dream of Electric Sheep by Philip K. Dick. Opening on October 6, 2017, in 2D and 3D in select theatres and IMAX, “Blade Runner 2049” is a presentation of Alcon Entertainment and will be distributed domestically by Warner Bros. Pictures, a Warner Bros. Entertainment Company, and internationally by Sony Pictures Entertainment. www.bladerunnermovie.com

Warner Bros. Pictures’ action adventure “Aquaman” is helmed by James Wan and stars Jason Momoa in the title role, returning to the character he plays in this fall’s “Justice League.” The film also stars Amber Heard, Willem Dafoe, Temuera Morrison, Dolph Lundgren, Yahya Abdul-Mateen II, with Patrick Wilson, and Nicole Kidman. The film is being produced by Peter Safran, with Zack Snyder, Deborah Snyder, Rob Cowan, Jon Berg and Geoff Johns serving as executive producers. An icon for over 75 years, Aquaman is known by fans of DC Comics as the ruler of Atlantis but committed to protecting the entire globe, both land and sea. Currently set for a 2018 release, the film is based on characters from DC.

New Line Cinema’s horror thriller “IT” is based on the hugely popular Stephen King novel of the same name, which has been terrifying readers for decades. When children begin to disappear in the town of Derry, Maine, a group of young kids are faced with their biggest fears when they square off against an evil clown named Pennywise, whose history of murder and violence dates back for centuries. “IT” stars Bill Skarsgård as the story’s central villain, Pennywise, alongside Jaeden Lieberher, Jeremy Ray Taylor, Sophia Lillis, Finn Wolfhard, Wyatt Oleff, Chosen Jacobs, Jack Dylan Grazer, Nicholas Hamilton and Jackson Robert Scott. Andy Muschietti directed “IT” from a screenplay by Chase Palmer & Cary Fukunaga and Gary Dauberman. Roy Lee, Dan Lin, Seth Grahame-Smith, David Katzenberg and Barbara Muschietti are the producers, with Dave Neustadter, Walter Hamada, Richard Brener, Toby Emmerich, Marty P. Ewing, Doug Davison, Jon Silk and Niija Kuykendall serving as executive producers. New Line Cinema presents a Vertigo Entertainment/Lin Pictures/Katzsmith Production, “IT.” Slated for release on September 8, 2017, the film will be distributed by Warner Bros. Pictures, a Warner Entertainment Company. www.Itthemove.com

About “The LEGO NINJAGO Movie”

A new animated adventure in Warner Bros. Pictures’ LEGO® franchise, “The LEGO NINJAGO® Movie” stars Dave Franco, Justin Theroux, Fred Armisen, Abbi Jacobson, Olivia Munn, Kumail Nanjiani, Michael Peña, Zach Woods, and the legendary Jackie Chan. In this big-screen NINJAGO adventure, the battle for NINJAGO City calls to action young Master Builder Lloyd, aka the Green Ninja, along with his friends, who are all secret ninja warriors. Led by Master Wu, as wise-cracking as he is wise, they must defeat evil warlord Garmadon, The Worst Guy Ever, who also happens to be Lloyd’s dad. Pitting mech against mech and father against son, the epic showdown will test this fierce but undisciplined team of modern-day ninjas who must learn to check their egos and pull together to unleash their inner power of Spinjitzu. The film is directed by Charlie Bean, Paul Fisher and Bob Logan. The screenplay is by Bob Logan & Paul Fisher & William Wheeler & Tom Wheeler and Jared Stern & John Whittington, story by Hilary Winston & Bob Logan & Paul Fisher & William Wheeler & Tom Wheeler and Dan Hageman & Kevin Hageman, based on LEGO Construction Toys. It is produced by Dan Lin, Phil Lord, Christopher Miller, Chris McKay, Maryann Garger, and Roy Lee. The executive producers are Jill Wilfert, Keith Malone, and Seth Grahame-Smith, with John Powers Middleton serving as co-producer. The film is slated to open on September 22, 2017, in both 3D and 2D. From Warner Bros. Pictures and Warner Animation Group, in association with LEGO System A/S, a Lin Pictures/Lord Miller/Vertigo Entertainment Production, “The LEGO NINJAGO Movie” will be distributed worldwide by Warner Bros. Pictures, a Warner Bros. Entertainment Company. www.legoninjagomovie.com

LEGO, the LEGO logo, NINJAGO, the minifigure and the brick and knob configuration are trademarks of The LEGO Group. ©2017 The LEGO Group. Used with permission. All rights reserved.