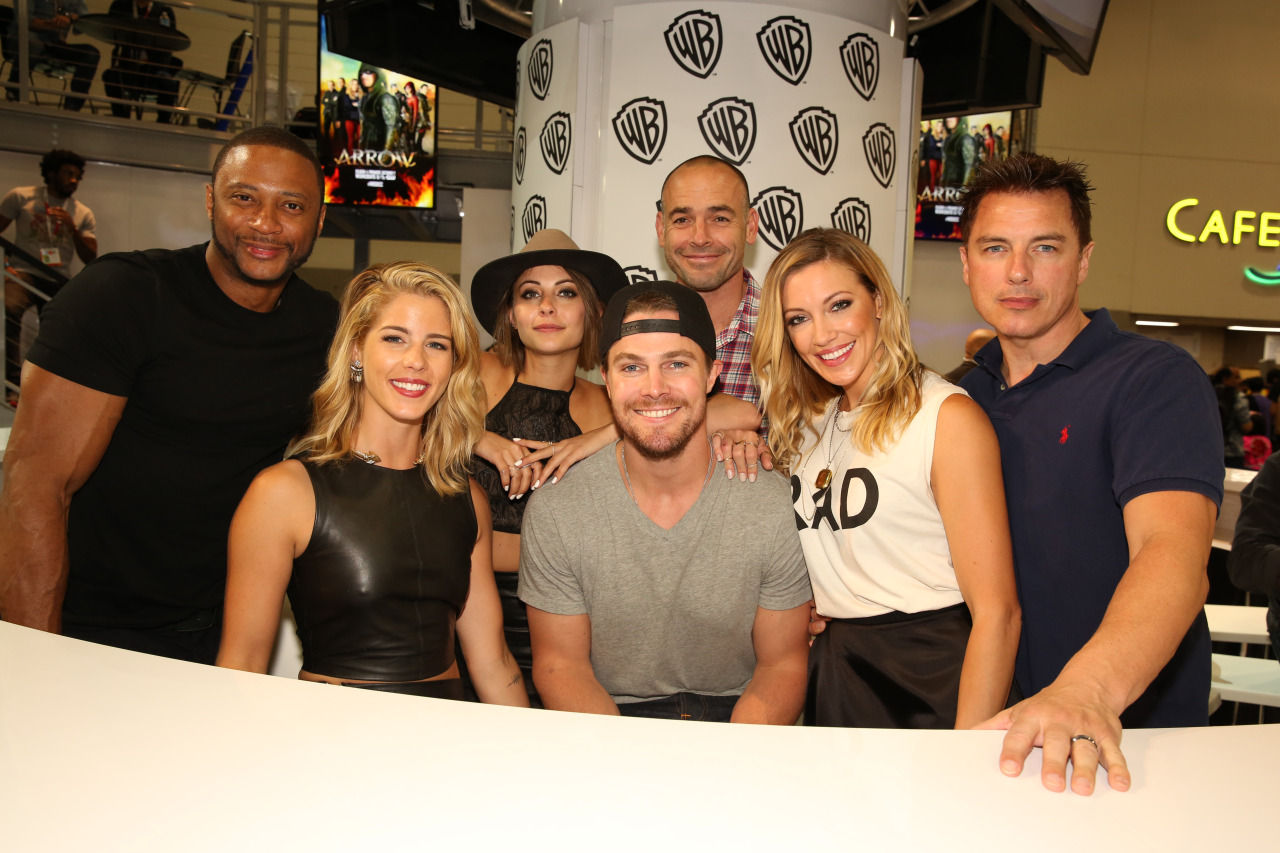 With Comic-Con 2016 coming at us in a flash, the behind-the-scenes team at the Warner Bros. booth (#4545) is once again making a super heroic effort to create another must-see environment, including displays of actual production costumes from the hit Warner Bros. Television/The CW series Arrow, Supergirl and The Flash offering fans the chance to see how they measure up to their favorite Super Hero; a super-sized LEGO® Batman; a Fantastic Beasts and Where to Find Them Wand Master Training Station; and an exclusive giveaway of a limited edition set of WBTV series “Wish You Were Here” postcards, while supplies last, only available at the Warner Bros. Booth. Always a destination for Comic-Con fans, the Warner Bros. booth will deliver constant activities for fans to enjoy, including talent appearances, autograph signings and more.

While the presence of Super Heroes at the Warner Bros. Booth is not an unprecedented event, for the first time ever, all three costumes for Arrow, The Flash and Supergirl from their respective series on The CW will be on display for fans to measure up against.

All three costumes were initially conceived and created by three-time Oscar®-winning costume designer Colleen Atwood. In Season Four of Arrow and Season Two of The Flash, series costume designer Maya Mani made some modifications to the two Super Hero costumes. In addition to the authentic production costumes, each of the super suits is modeled on a life-sized 3-D rendering, created from laser body scans of series stars Stephen Amell (Arrow), Grant Gustin (The Flash) and Melisa Benoist (Supergirl).

WHAT’S SEVEN FEET TALL, MADE OF PLASTIC, AND ONLY WORKS IN BLACK (OR VERY, VERY DARK GREY)? LEGO® BATMAN!

The creative MasterBuilders at The LEGO® Group are back again with another Comic-Con exclusive: a super-sized LEGO® Batman

Kapow! Looking “really cool,” LEGO® Batman is constructed from 53,998 LEGO® bricks, stands just under seven feet tall and weighs in at 266 pounds. It took 45 hours for the LEGO® masterminds to design him and an astounding 340 hours for him to be built. He makes his special appearance at the Warner Bros. booth in advance of his upcoming stand-alone feature film. Don’t miss your opportunity to be humbled by the sheer “awesomeness” that is LEGO® Batman!

In addition, LEGO® Batman fans will have an opportunity to take a selfie with LEGO® Batman to share via social media onsite, using a custom brick-built “Batman Selfie Booth.”

In the irreverent spirit of fun that made The LEGO® Movie a worldwide phenomenon, the self-described leading man of that ensemble — LEGO® Batman (Will Arnett) — stars in his own big-screen adventure. But there are big changes brewing in Gotham. If he wants to save the city from a hostile takeover by The Joker (Zach Galifianakis), Batman may have to drop the lone vigilante thing, try to work with others and maybe, just maybe, learn to lighten up. Also starring Michael Cera, Rosario Dawson and Ralph Fiennes, The LEGO Batman Movie directed by Chris McKay will be released by Warner Bros. Pictures on February 10, 2017.

WISH YOU WERE HERE? SHARE ALL YOUR COMIC-CON EXPERIENCES WITH YOUR FRIENDS WITH COOL COLLECTIBLE POSTCARDS!

Warner Bros. Worldwide Television Marketing has created an exclusive set of “Wish You Were Here” collectible postcards based on Warner Bros. Television series for fans to share with their friends — or keep for themselves!

Featuring series artwork on the front, the postcard backs all include custom Comic-Con messaging from each of the shows.

WARNER BROS. PICTURES CONJURES MORE MAGIC WITH FANTASTIC BEASTS AND WHERE TO FIND THEM WAND STATION

In addition to talent signings for King Arthur: Legend of the Sword, Warner Bros. Pictures will be bringing to the booth the cast from Fantastic Beasts and Where to Find Them — including Eddie Redmayne, Katherine Waterston, Dan Fogler, Alison Sudol, Ezra Miller and Colin Farrell, along with director David Yates.

In addition to the signing, there will be a Fantastic Beasts and Where to Find Them Wand Master Training Station where you can try your hand at mastering all new spells.

In an all-new adventure that returns us to the wizarding world created by J.K. Rowling, Academy Award® winner Eddie Redmayne stars as magizoologist Newt Scamander, who has just completed a global excursion to find and document an extraordinary array of magical creatures. Arriving in 1926 New York for a brief stopover, he might have come and gone without incident, were it not for a No-Maj (American Muggle) named Jacob, a misplaced magical case and the escape of some of Newt’s fantastic beasts — which could spell trouble for both the wizarding and No-Maj worlds. Written by J.K. Rowling, Fantastic Beasts and Where to Find Them has been slated for worldwide release by Warner Bros. Pictures on November 18, 2016.

This fall, get ready for the wildest mash-ups this side of the Multiverse with more of your favorite brands like Harry Potter, Adventure Time and Sonic the Hedgehog joining the fun. Immerse yourself into full movie experiences of the year’s biggest blockbusters with Story Packs. And prepare to battle in all-new Adventure World Battle Arenas as you take adventure gaming further with the only platform that brings unlimited compatibility across every character, vehicle, gadget and world.

Bring the wizarding world to life in LEGO® Dimensions with the Harry Potter Team Pack. If Hogwarts is not your style, play the complete Fantastic Beasts and Where to Find Them Story Pack and help Newt Scamander find his escaped magical creature in New York City across six action-packed levels of gameplay. In addition, you can explore more of the LEGO® multiverse with the Fantastic Beasts and Where to Find Them Fun Pack.

About LEGO® Dimensions: For the first time in a LEGO® videogame, characters from a mix of some of the best brands in the universe join forces and battle in worlds outside of their own. A Dark Knight, a Wizard, and a LEGO® Master Builder traveling together down the Yellow Brick Road is just the beginning. The LEGO® Dimensions Starter Pack is all players need to begin — build the base and minifigure heroes, and embark on a fantastic quest to save the LEGO® Multiverse. By purchasing additional expansion packs, players can grow their toy collection and add more gaming fun to the experience through a variety of their favorite brands to create even more crazy combinations.

From Thursday through Sunday, a cavalcade of talent — including producers and stars from Warner Bros. Television shows, Warner Bros. Animation, Warner Home Entertainment, Warner Bros. Pictures and HBO — will be signing for fans at the Warner Bros. booth. Talent to be announced. The signing schedule is as follows: