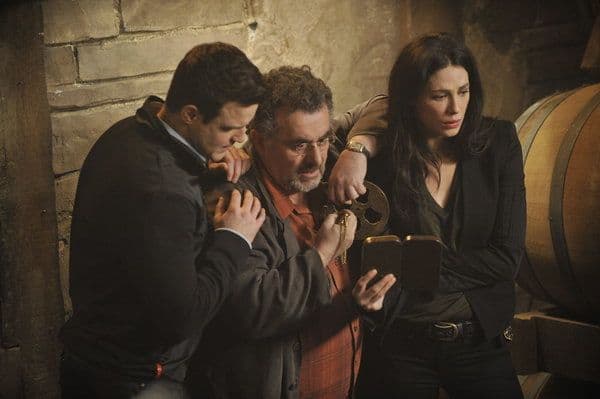 SyFy’s WAREHOUSE 13 begins season four with “A New Hope.” Picking up right where season three left off, with the Warehouse destroyed, and Mrs. Fredericks (CCH Pounder), H.G. Wells (Jaime Murray), and Steve (Aaron Ashmore) dead, Artie (Saul Rubinek) has an inkling of a plan that might reverse time and give them another chance.

This quest of Artie’s takes him, Claudia (Allison Scagliotti), Pete (Eddie McClintock), and Mya (Joanne Kelly) first to France, then to the Vatican, as they follow a series of clues that point to a Knights Templar conspiracy. They have a scant 24 hours to globe trot and solve the mysteries, as well as break into a couple of semi-well guarded areas that are, perhaps, a bit too easy to get in to. Along the way, members of the team are lost, including one fatally.

It will come as no surprise that (SPOILER!) Artie wins the day, Pete, Mrs. Frederick and H.G. live, and the Warehouse is restored as if nothing ever happened.

The countdown and the race, with a team member dropping off every few minutes, gets the blood pumping enough to keep the lack of freshness in the story from being too obvious. There aren’t any real stakes in “A New Hope,” as fans don’t believe for an instant that the Warehouse, Mrs. Frederick, and especially Pete, are gone for good. But the urgency of the characters’ actions, and the total commitment by the actors to the proceedings, do make the episode exciting. While a similar formula has been used plenty of times on television before, the episode maintains the unique, WAREHOUSE 13 flavor that keeps fans engaged week after week, so most won’t mind.

Even if there isn’t a lot of real suspense in the episode of the week, a quick story to restore the status quo, a number of really neat arcs kick off in “A New Hope.” Claudia is intent on bringing Steve back, no matter what it takes, which, going by past experience, both on this series and others, will not go well. Cheating death comes with consequences. Steve may return, a welcome development, but will it be the same Steve? Will he be changed? What cost might there be to Claudia’s soul to achieve her goal?

What’s more, Artie is being hunted by a dark evil. The leader of the knights (Brent Spiner, Star Trek: The Next Generation) warns Artie that using the artifact to reverse time at the end of “A New Hope” will have grave repercussions. By the end of the hour, Artie has a dream of Claudia stabbing him. While Claudia’s quest to bring back Steve may have already been put in motion, it seems like these two stories will tie together nicely.

Claudia grew up a bit of an outsider. She has welcomed the chance to have a family while working at the Warehouse. Now that she has established a life and grown into herself, she is going to do anything to hold onto it. Losing Steve, her first field partner, is a huge blow, and the motivations behind her mission are not a mystery. She is a damaged girl just trying to hang onto the bit of stability she found after years of searching.

Artie is older and should be wiser. He has lost friends before, and knows he will again. Yet, he cannot stomach the huge cost that comes just prior to “A New Hope,” and rather than taking the advice the misfortune. Even had it just been Pete’s life, and not the Warehouse, he still may have acted. As much as Artie likes to pretend to be gruff and try not to get too attached to his team, he cares too much for his own good. Maybe he can use these life lessons and experiences to help Claudia?

Another interesting bit of “A New Hope” is when Artie convinces a couple of the Regents to recommend a pardon for H.G. Obviously, Artie witnessed her sacrifice herself to save the others in last year’s season finale. And H.G.’s motivations are always varied and layered. But will Artie consider this a repayment of debt to her for her willingness to die to save him, or has he changed his opinion of her? And will his faith be proven justified, or did H.G. have yet another reason for acting the way she did? The good news is, she gets to stick around so we can find out!

There is a reason WAREHOUSE 13 is so popular. It’s funny, charming, and fast paced fun. Tune in Mondays at 9 p.m. ET on SyFy.