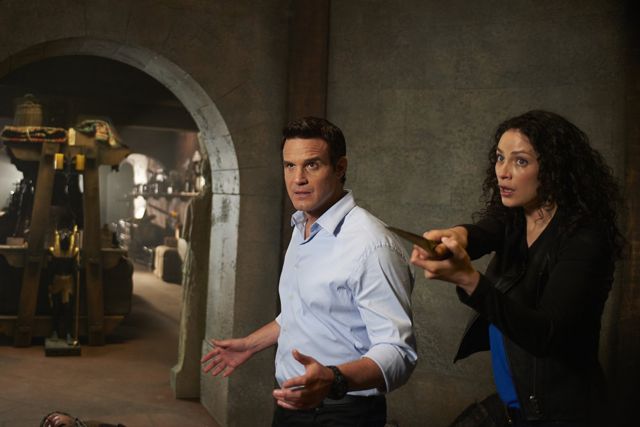 Syfy’s WAREHOUSE 13 has only six episodes left to air. This week’s season five premiere, “Endless Terror,” doesn’t have much time for final arcs, though, as it is mostly concerned with tying up the loose ends from the previous season’s cliffhanger. Looking at the episode descriptions for the final five, it sounds like this show will go out with some character development, rather than a major villain that must be defeated, so the understated premiere could be part of the design.

As “Endless Terror” begins, there is still a bad guy to take down. Paracelsus (Anthony Stewart Head) has control of the Warehouse and, by extension, Claudia (Allison Scagliotti). Pete (Eddie McClintock), Myka (Joanne Kelly), Artie (Saul Rubinek), and Jinks (Aaron Ashmore) try to break past the building’s defenses and get inside before Paracelsus can put together a couple of artifacts and carry out his dastardly plan.

Our heroes don’t succeed right away, of course, and the result is an action-packed hour full of time travel and alternate timelines. This conceit allows WAREHOUSE 13 to parade through quite a few familiar faces, including some characters that are no longer alive, a fitting tribute to the final year. Plus, we get Rebecca Mader (Once Upon a Time) as Lisa DaVinci, so that’s fun. It’s a pretty solid story in terms of the premise, and a good way to being a victory lap, even if it left me wishing this particular arc filled all six episodes, not just a single one.

The major problem in “Endless Terror” isn’t in the big picture; it’s in the details. It’s been awhile since WAREHOUSE 13 was on the air so I don’t remember exactly if it has always been as cheesy as this entry is. If anything, the episode seems much heavier on the schmaltz, more concerned with delivering zingers than making a cohesive tale with developments that make sense. As such, it certainly isn’t among the best of installments.

WAREHOUSE 13’s charm has always relied pretty heavily on humor. The funny things the characters say are a main draw, and that element is intact as ever. Nothing has changed about the writing or the chemistry. However, while the plot may have had a few instances of deus ex machine or happy coincidence in the past, it isn’t built heavily on them, and the characters are often in real danger, even if they try to play it off as if they aren’t. “Endless Terror” abandons the toehold on reality, laughing off potentially deadly circumstances is such a way that makes the show seem hollow.

If this is how the players will be treated, it may be a good thing that WAREHOUSE 13 focuses on growth and development of its central cast, rather than an epic battle. Claudia is still upset with Artie for hiding her sister, Claire, from her. Myka’s brush with death has to be weighing on Pete even more than he lets on. Those are things that beg further exploration, and will hopefully drive this last half-dozen adventures.

Will fans be disappointed if WAREHOUSE 13 goes out quietly? I think so. After all, the series has tackled large arcs before, with evil geniuses who are not easily dispatched. One would expect the final leg to take this quality to the next level, not to ignore it altogether. Yet, “Endless Terror” is seemingly the wrap up of the last of these, choosing a different path to go down now.

Of course, the main thing the series will be judged on this year will be the last episode ever. If they can manage to nail that, giving us emotional closure and a fitting conclusion, fans will forgive any missteps along the way. I’m cautiously optimistic because the writers have done some cool things in the past, but this first episode back is so uneven as to make me a little nervous. We’ll have to wait and see how it goes.