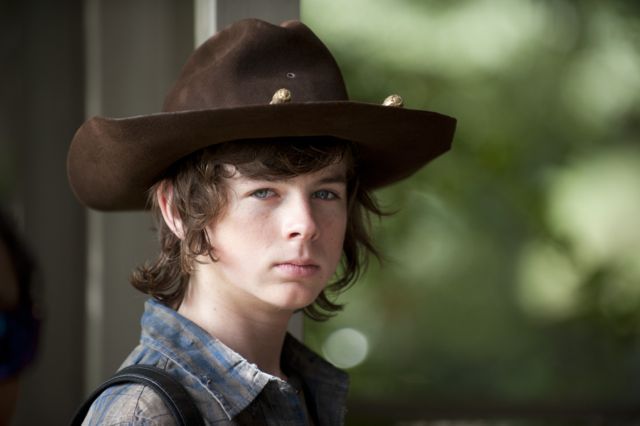 This week’s installment of AMC’s THE WALKING DEAD, “Claimed,” bounced back and forth between two of the five groups of main characters. Rick (Andrew Lincoln) must deal with intruders while Michonne (Danai Gurira) is off getting supplies with Carl (Chandler Riggs), and trying to cheer him up in the process. Meanwhile, Glenn (Steven Yeun) wakes up to discover he’s traveled hours from Maggie (Laure Cohan), but Abraham (Michael Cudlitz) isn’t willing to turn around, claiming they’re on a mission to save the world.

It seems like, at this point, for every “good” group of humans our heroes come across, they find one equally bad. Most would say by now that Abraham, Rosita (Christian Serratos), and Eugene (Josh McDermitt) fall into the former category, while the men that Rick has to sneakily avoid are the latter. Yes, this world is one of shades of grey, but that doesn’t mean there aren’t those who can be friends, and those who definitely cannot.

Fans of the comic already know that Abrhama, Rosita, and Eugene are nice, but even if you only watch the show, “Claimed” seems to very strongly point in that direction, too. Abraham only hits Glenn when Glenn strikes first, and his earnest insistences to Tara (Alanna Masterson) that they are going to save the world seem sincere. Rosita chooses to go with Glenn and Tara when they leave, and Eugene only shoots at walkers and trucks, never pointing his gun at people.

The only sign that might worry some is that Abraham actually smiles while killing walkers, something that bothers Tara at first, but I feel like this can be explained away. Abraham is clearly a soldier, comfortable following orders and knowing what his job is. When he’s stopping the dead from hurting the living, he’s fulfilling a purpose, and thus, seems satisfied. Other moments, like when he follows Eugene’s directives as Eugene claims he’s smarter than Abraham, point to the same thing. So I don’t think we need to worry about Abraham turning out to be a psychopath, just dedicated to his quest, and it doesn’t look like he’ll really hurt anyone he doesn’t have to to fulfill it.

Eugene seems colder, but he never threatens our party, either, instead, following them after his ineptitude with a gun destroys their ride. He comes across as an anti-social braniac, sort of Sheldon Cooper with a mullet, which isn’t a bad thing. If he really knows what he claims to know (and comic book fans, let’s keep what we know about Eugene to ourselves because you never know which direction the show will go), then he is someone the protagonists should help out, once they find each other again.

The question posed in this half of the episode is, should Glenn help them stop the walker plague, or should he look for his wife? This is a tough decision, and one that has to be up to the individual. For Glenn, he has a very single-mindedness that Abraham doesn’t understand, even though Abraham is equally narrowly focused the other way. Abraham is right that the world is more important than one woman, but given everything Glenn has been through, he can be forgiven for not getting on board with the plan. Perhaps if the salvation was at hand, he might help, but his love for Maggie is too strong to travel several states away without any proof.

Alanna chooses to help Glenn, rather than go with Abraham and company, because she feels she owes him her life. She is a good person, as Abraham says she is, but she doesn’t believe it. She’s not approaching it from the standpoint that it’s what a good person will do. She just wants to repay the favor and try to make up for her part in the attack on the prison, which is fair.

Now the guys that Rick faces are, without question, evil. One strangles another for a better bed! I don’t think he killed the man, as there is definitely still breathing going on, but that’s still pretty awful. Their guns don’t look nice. And even if you argue the man Rick finds on the toilet only acts in self-defense when he grasps for scissors to stab Rick, the conversation overheard about terrorizing the woman who left the clean shirt in the house erase any doubts.

“Claimed” does a good job setting up the tension as Rick sneaks through the dwelling, knowing that Carl and Michonne will be home soon and likely walk straight into an ambush. We all know Rick is going to make it out alive, but I was still on the edge of my seat for most of the sequence. And Rick leaving the bathroom guy as a “walker bomb” is brilliant, something hard to see coming until it happens. It’s well-structured suspense.

Michonne does let her guard down a little too much this week. She is usually quite vigilant, and while it’s sweet she drops her emotional barriers to Carl, helping him work through the loss of Judith (who they don’t know survived) while telling viewers enlightening things about herself, she should still be more alert when heading back to the house. The fact that Rick has to run out and meet them, so close, while Michonne is still casually walking home, is disturbing. We like softer Michonne, a woman that can be a friend, not just a soldier, but only if she can still defend the group.

Wandering an abandoned building, Michonne comes across a family who has killed themselves. Setting aside the fact that they did it in a creepy girl’s room, rather than some place more appropriate, this is a sad, tragic event. It’s likely many people chose this way out when all the bad stuff broke lose, and it’s understandable. But these are not who our people are. Our people are survivors. Michonne has chosen life, not suicide, and here she sees a graphic representation of the alternative. Disturbing!

I’d like to predict the plot of next week’s episode. Looking at the previews, it appears only Daryl (Norman Reedus) and Beth (Emily Kinney) will be featured, finding out that it’s extremely difficult to try to survive by themselves on the road. Once they successfully maneuver around many walkers, they’ll spot the bandage that Rick so obviously dropped near the railroad and begin to track their friends to Terminus. Which means the other two groups, who weren’t in “Claimed,” probably won’t be seen again until the following week.

Some have complained about this fractured set up, but I like it. It gives the players more focus in the episodes in which they star, and shows us things about them, more than just why they’re still alive. THE WALKING DEAD excels at character-driven moments, and this new format, as temporary as we all expect it to be, with everyone surely making it to Terminus by the season finale, is a nice way to spend half a season. Don’t get me wrong, I’m not advocating for the separation to be permanent. I’m just saying to enjoy it while it lasts.