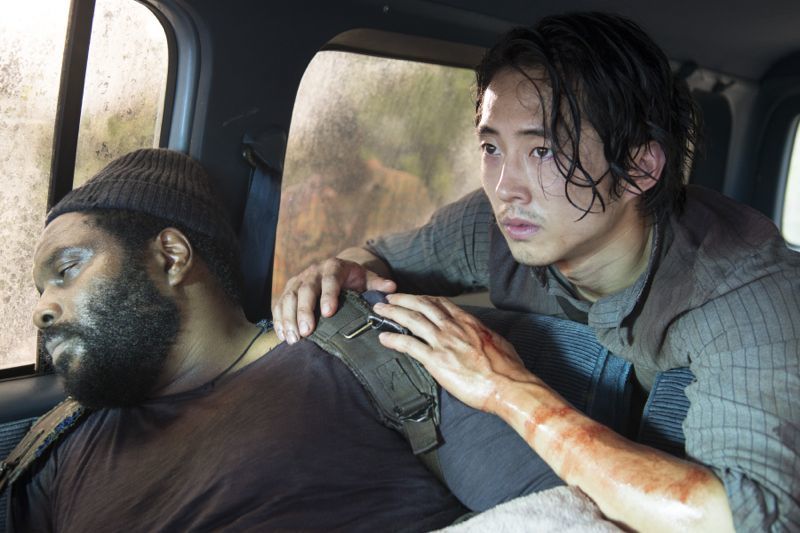 Fans of AMC’s THE WALKING DEAD eagerly anticipated last night’s mid-season premiere, wondering “What Happened and What’s Going On.” We get an answer to the strange title of the episode, some time after the events of last season. The group goes to Richmond, Virginia, where Noah’s (Tyler James William) mother and brothers were last known to be. But there’s been a cost to this journey, to this life, and there’s a fatal price for looking for hope in this place.

With Eugene (Josh McDermitt) now a known liar, the group lacks direction. Noah provides a little bit of it with a pipe dream, tales of a place protected by walls. It’s better than any other idea offered, so it’s understandable they would give it a shot. This, despite the fact that several of the characters don’t bother to buy into the hope at all. They are too jaded, have been disappointed too many times. They don’t see an attractive path left open to them.

Michonne (Danai Gurira) is not one of those. Listening to Rick (Andrew Lincoln) and Glenn (Steven Yeun) debate if killing Dawn even matters, she reaches a breaking point. Of course taking a life matters. Of course one must try to hold onto their humanity. The guys may not agree in “What Happened and What’s Going On,” but at least Rick has the good sense enough to listen to Michonne’s concerns. Maybe he’s past caring, but he recognizes the wisdom in trying to do so.

Michonne is now the de-facto moral compass, which is a precarious position to be in. Those who have shouldered the mantle in the past tend to have a limited lifespan. I desperately hope Michonne’s days aren’t numbered, but I felt the same about Hershel and about THE WALKING DEAD’s most recent victim, and have been disappointed both times. Disappointed not because their stories aren’t fantastic; they are. Disappointed because I mourn for and miss those players. True, there’s no impending demise for her if the show echoes the comics, but ask Andrea, who is still alive in the paper version, how believing the TV adaptation will follow the books works out.

As THE WALKING DEAD returns this week, it’s Tyreese (Chad L. Coleman) who tries to hold on. He offers to stay with Noah as Rick, Glenn, and Michonne hunt for supplies. And in Noah’s house, Tyreese is taken in by the photos of Noah’s brothers, innocents. It makes Tyreese remember his own family, his own father, and it saddens him.

Unfortunately, THE WALKING DEAD is cruel to those who take the time for such sappy reminiscing. Tyreese is bitten while distracted, and despite everyone’s best efforts to save him, it’s too late. Another moral compass gone, passing the torch to Michonne.

Tyreese is a beloved and fascinating character, and his death in “What Happened and What’s Going On” is worthy of him and of Coleman, who brings him to life so brilliantly. We see flashes of Tyreese’s past over the last few seasons. We see mementos of happier times. It’s almost a victory lap, a life flashing before one’s eyes, reminding Tyreese of what’s important.

As he lies bleeding, he’s visited by the ghost of many a departed friend and foe, including Bob (Lawrence Gilliard Jr.), Beth (Emily Kinney), Lizzie (Brighton Sharbino), Mika (Kyla Kenedy), Martin (Chris Coy), and The Governor (David Morrissey). Some of them are there to comfort him and usher him out of this life. Others are there to accuse him of wrongdoing and make him take stock of his situation. In the end, though, the comfort wins out, and while Tyreese fights if for awhile, we eventually see him go away peacefully, surrounded by those who care.

Not every death on THE WALKING DEAD is this pretty, but if there’s a soul that deserves this type of demise, it’s Tyreese. Out of the action, his passing is unexpected, but it also makes sense, given the type of guy he is. If it didn’t happen here, it would have happened soon enough anyway. Having all of those actors return makes it that much sweeter, lending importance to the passing, and delighting viewers who miss them. Yes, even The Governor is missed, if for Morrissey’s performance alone.

“What Happened and What’s Going On” is a way-stop on the way to D.C., the place where an ounce of hope might still remain. Still, it’s an important one. The Walking Dead skips over 500 miles of the journey, but I’m glad it chooses now to take a brief respite and deliver a compelling narrative.

Next week, they will go the last 100 miles and find something new. If the next stage is anything like the comic books, the show is about to change dramatically, and this hour serves as a fine transition between two distinct halves of a major series, starting to close the book on what the characters have been dealing with thus far.