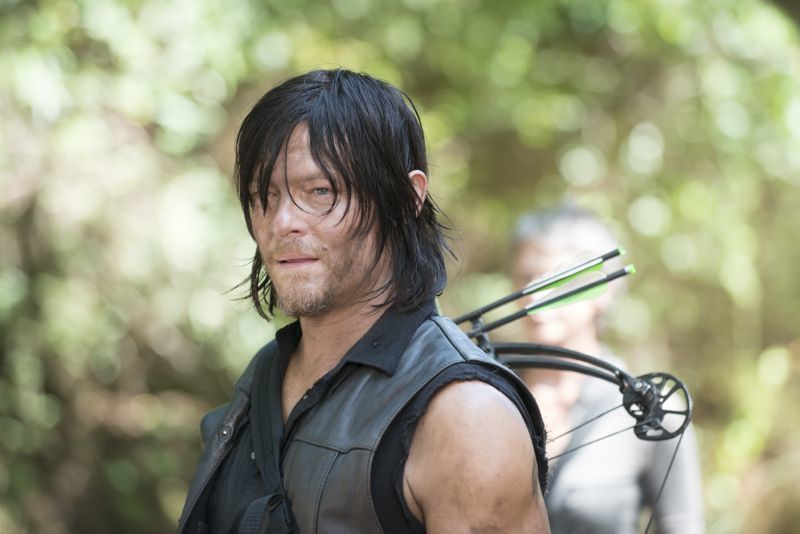 THE WALKING DEAD on AMC is about a group of survivors who have done everything they needed to in order to survive. This week’s installment, “Them,” brings them to the end of their ropes in this regard. Starving, dehydrated, walking slowly after their vehicles run out of gas, our heroes are still sixty miles from D.C. but they might as well be six hundred. If something doesn’t break soon, they aren’t going to make it.

Things are especially hard for the survivors closest to those who recently departed. Sasha (Sonequa Martin-Green) is angry at her brother’s demise, which happens because of a careless accident, and she doesn’t know how to come to terms with that. Her erratic behavior endangers everyone when she abandons an easy Walker slaughter plan in favor of working out her anger with a knife. If Sasha doesn’t find a way to begin to move on, she may lose her own life or that of yet another person she cares about. Though, she tells Abraham (Michael Cudlitz) that they are not friends, so maybe she doesn’t care about anyone left.

Maggie (Lauren Cohan) has also lost a sibling, and also becomes self-destructive, though not at the expense of the others. Granted, Maggie has been a part of the group longer so maybe she cares more. She isn’t shut down and cold; her compassion won’t let her walk away from a Walker in a trunk, which Glenn (Steven Yeun) helps her dispatch. But reluctant to even sip water, Maggie isn’t doing well.

And then there’s Daryl (Norman Reedus). His instinct is to hide away, hard to do when the group is traveling together. So he keeps making excuses that he’s looking for elusive water. Carol (Melissa McBride) tries to help, telling him he needs to grieve, but like Abraham’s failure with Sasha and Father Gabriel’s (Seth Gilliam) inability to get to Maggie, Daryl rebukes her attempts. That is, until he purposely burns himself with a cigarette, and then the tears come in a very moving scene, which may just give him an advantage over the other two because he’s at least he’s facing his emotions.

These three are the worst, those personally highlighted in “Them,” but they are far from alone. Every character on this show has been similarly featured at one point or another because this life is not one they can stand much longer. Michonne (Danai Gurira) argues last week that they have to settle down to recapture their humanity. She’s right, as our group stumbling along looks almost no different from the Walkers trailing them. This leads Rick (Andrew Lincoln) to give voice to what fans have been saying for years: they, not the zombies, are The Walking Dead.

All of this builds into a fantastical storm, a metaphor for the pent-up feelings they all battle, and the group takes shelter in a barn. When Walkers push against the doors to get in, it’s Maggie, Daryl, and Sasha that first rush to hold off their attackers. Those left at this point want to live, and even when things look grim, the most desperate among them find a way to rally. Like the Walker Maggie finds in the barn who couldn’t turn her gun on herself, they will never give up.

At the end of “Them,” a new face enters their midst: Aaron (Ross Marquand, Down and Dangerous). Aaron has anonymously gifted them water, which they ignore for fear of poison, and now he wants to speak with their leader, whom he asks for by name. Maggie and Sasha, whom he first approaches, are naturally suspicious, and with good reason. This group has faced many a hostile person who disguises themselves as good. With Aaron skulking around and spying on them, how can they trust him?

Yet, that’s exactly what Rick and crew tried to do at Terminus, observe from afar before deciding to approach. It’s smart tactics, and doesn’t necessarily condemn Aaron as evil. If the series follows the books (SPOILER – though the series often makes different choices, so this may not really be a spoiler), Aaron is the catalyst that finally lets them flip from pure survival to rebuilding civilization, as well as basically doubles the cast size. He’s the start of the second half of the story as told so far; he’s a desperately needed savior. Will the Aaron of screen be the same, and how can they learn to trust him?

“Them” is a fascinating portrait of people on the edge, highlighting some of the themes often seen in the show in a more extreme, while still quiet, fashion. Having the weather match the mood is pleasantly artistic, and there are excellent performances from a number of cast members, including Gilliam, whose priest burns his collar. I find no flaw in the hour, and am stoked for the next chapter of the story.