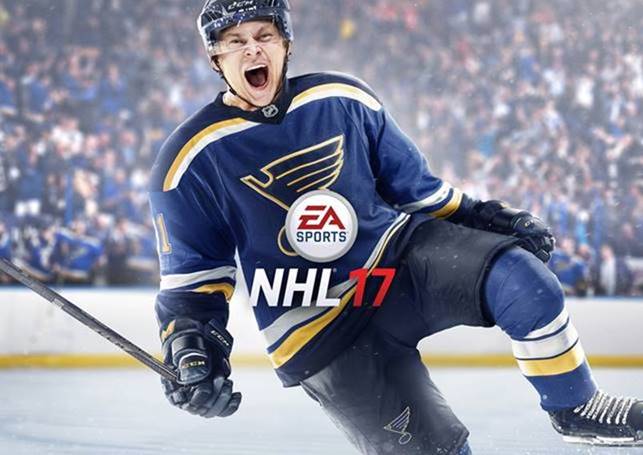 Electronic Arts Inc. (NASDAQ: EA) today unveiled the world premiere EA SPORTS™ NHL® 17 Shape Your Legacy Official Gameplay Trailer to all hockey fans at the 2016 NHL Awards™ in Las Vegas, alongside the news that St. Louis Blues® star forward Vladimir Tarasenko is the winner of the fan-selected cover vote and will be featured on the cover of NHL 17. Over six million votes were cast on Twitter and on NHL.com in the NHL 17 Cover Vote competition before Tarasenko, who led the St. Louis Blues® in playoff scoring during the Stanley Cup Playoffs, was selected as the winner.

“It’s an incredible honor to represent my teammates and all the Blues fans around the world on the cover this year,” said Vladimir Tarasenko, St. Louis Blues®. “As a player, it’s a big deal to be fan selected for something like the Cover Vote, and I’m excited to be involved in the game this year.”

EA SPORTS also announced that all players on Xbox One and PlayStation®4 can register now for the NHL 17 public beta* starting July 28 and featuring three playable game modes. Players who sign up to become an EA SPORTS NHL®  17 Insider will receive early access to the beta, as well as early access to news, trailers, and more before worldwide release on September 13, 2016.

“Last year we held our first ever beta and the feedback we received from fans helped us create a great experience at launch,” said Sean Ramjagsingh, Lead Producer, NHL 17. “For NHL 17 we’re opening up access to more players and we can’t wait for them to get their hands on the game.”

The beta will feature three modes: Online Versus, EA SPORTS Hockey League, and Hockey Ultimate Team™; as well as access to the Creation Zone. Beta registration is open starting now until July 7 at 11:59pm PDT, and the beta is scheduled to begin on July 28 at 12:00pm PDT and end on August 4 at 11:59pm PDT. Fans can register now for a chance to play NHL 17 first by visiting www.easports.com/nhl/beta.

Earlier in June, EA SPORTS announced the features in NHL 17 with details on the all-new experiences coming to fan-favorite game modes, including unprecedented on-ice gameplay control, new depth and customization in EA SPORTS Hockey League, and the all-new Synergy and Dynamic Sets features coming to Hockey Ultimate Team. For full detail on these features, as well as details on the brand new game modes and other exciting features coming to NHL 17, visit www.easports.com/nhl/features.

From the crease to the open ice to behind-the-scenes control of an entire franchise, NHL 17 lets you shape your legacy no matter how you play the game in the most exciting EA SPORTS NHL®  to date. Live out your hockey fantasy in new Draft Champions, Franchise Mode and World Cup of Hockey game modes. Own every zone with authentic goaltenders, new Net Battles on offense and defense, and bone-crushing Collision Physics. Take your team to the next level in the most customizable EA SPORTS Hockey League ever and bring your game to life with dozens of thrilling new goal celebrations.

NHL 17 will release worldwide on September 13, 2016 on Xbox One and PlayStation®4. Players can pre-order now and receive perks, including a one-month trial of EA Access (for digital pre-orders on Xbox One only)**±, in-game equipment in EA SPORTS Hockey League, an exclusive NHL® 94 goal celebration and more***. For full details and to pre-order the game now, visit www.easports.com/nhl/buy.

EA Access± members on Xbox One can try all the features of NHL 17 before its release with Play First Trials. Stay tuned for more information on access timing and availability.

NHL 17 is in development at EA Vancouver and has not yet been rated by the ESRB or PEGI; visit www.esrb.org and www.pegi.info for more information. NHL 17 will be available for Xbox One and PlayStation®4. Become a fan of EA SPORTS NHL® on Facebook and follow us on Twitter.