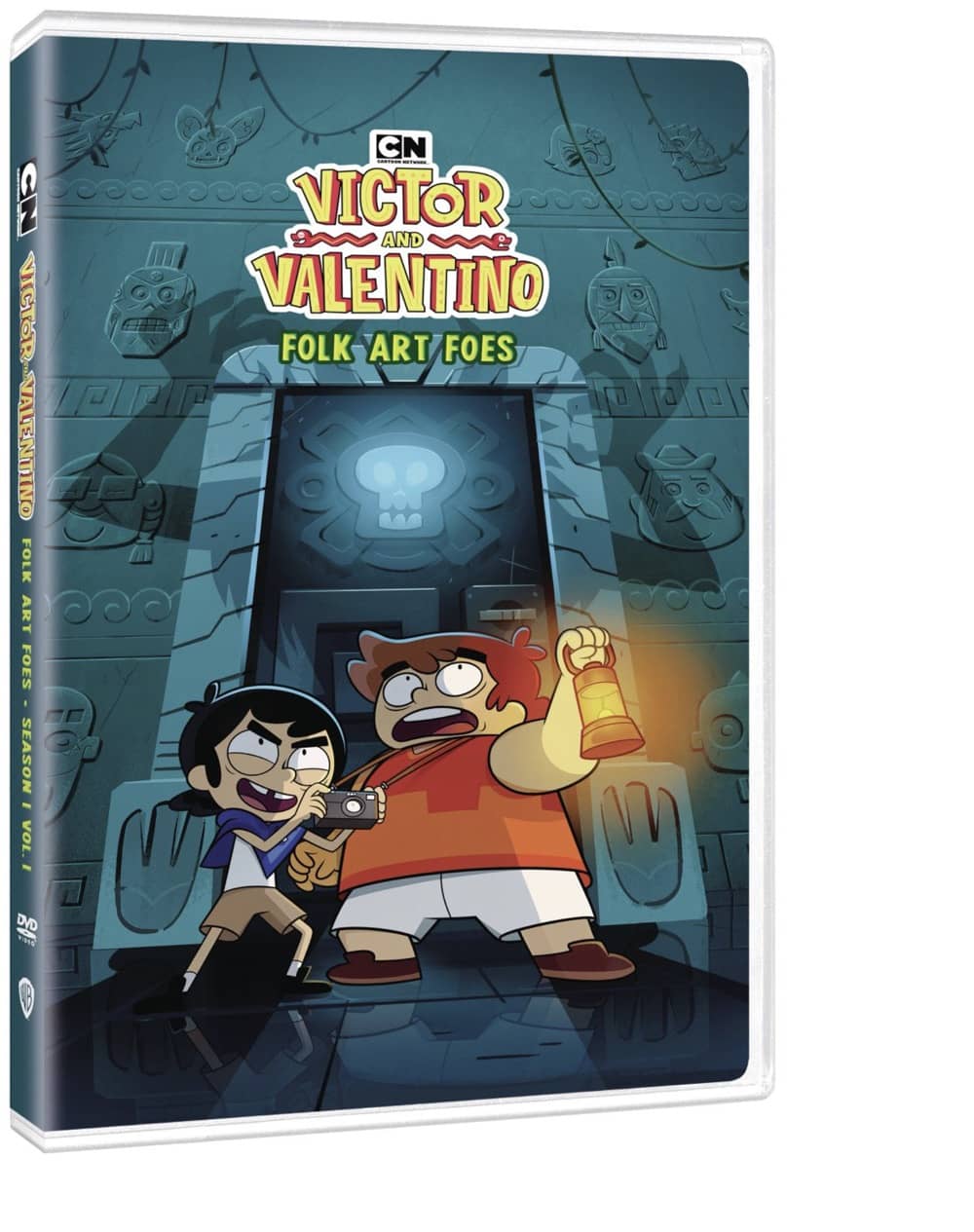 Get ready to embark on hilarious adventures filled with legendary stories and mythological encounters as Cartoon Network’s Imagen Award-nominated series, Victor and Valentino, heads to DVD next spring. Released by Warner Bros. Home Entertainment, Victor and Valentino: Folk Art Foes will be available March 2, 2021. The DVD carries a suggested retail price of $14.97 ($18.94 in Canada) and is rated TV-Y7.

Victor and Valentino is a supernatural adventure comedy about two half-brothers who spend a summer with their grandma in Monte Macabre, a small, mysterious town where the myths and legends of Mesoamerican folklore come to life.

Victor and Valentino is created by Diego Molano and produced by Cartoon Network Studios.

DIGITAL
Victor and Valentino is available to own on Digital. Digital allows consumers to instantly stream and download to watch anywhere and anytime on their favorite devices. Digital is available from various retailers including iTunes, Amazon Video, Google Play, Vudu, Xbox, and others.

GKYAC’s mission is to be the premier global provider of kids, family, young adults, and classics content and brands. The group’s programming supplies unique and compelling content for HBO MAX, WarnerMedia’s direct-to-consumer platform. Uniting these award-winning networks and innovative brands helps maximize opportunities and growth potential, both as standalone businesses and as content generators, to drive and support its franchises, cross-studio initiatives as well as ratings.

About Cartoon Network
Cartoon Network is a division of WarnerMedia and the #1 global animated series network, offering the best in original content for kids and families with such hits as Ben 10, Craig of the Creek, DC Super Hero Girls, Steven Universe, The Amazing World of Gumball, Teen Titans Go!, Victor and Valentino, and more. Seen in more than 185 countries, over 450 million homes and in 33 languages, Cartoon Network inspires the next generation of creators and innovators by engaging its audience at the intersection of creativity and technology. Its award-winning pro-social initiatives, Stop Bullying: Speak Up and CN Buddy Network are acknowledged and often used resources for kids and adults looking for tools that can assist in dealing with the ongoing issue of bullying.

About Cartoon Network Studios
Established in 2000, Cartoon Network Studios (CNS) is a global animation and interactive studio recognized for its innovative approaches to IP development and world-building. Fostering a creator-driven environment, CNS is home to hundreds of visual artists who have been a part of the studio’s many critically acclaimed and groundbreaking animated series including Adventure Time, Craig of the Creek, Steven Universe, Summer Camp Island, The Powerpuff Girls, and We Bare Bears. CNS has also produced notable Adult Swim hits such as Primal, Samurai Jack, and Harvey Birdman, Attorney at Law.

CNS has been honored with multiple awards and accolades including: Emmy®, Peabody, GLAAD and Annie Awards. Internationally, the studio also garnered the BAFTA Children’s Award, Italy’s prestigious Pulcinella Award and Annecy Festival’s Cristal Award. Currently, CNS houses a VR lab, and produces an array of interactive formats and products for youth and young adult audiences around the world. As part of its ongoing efforts to discover unique and promising voices everywhere, the studio has a robust global Artist Program and has numerous partnerships, including Exceptional Minds, Black Women Animate and California Institute of the Arts.