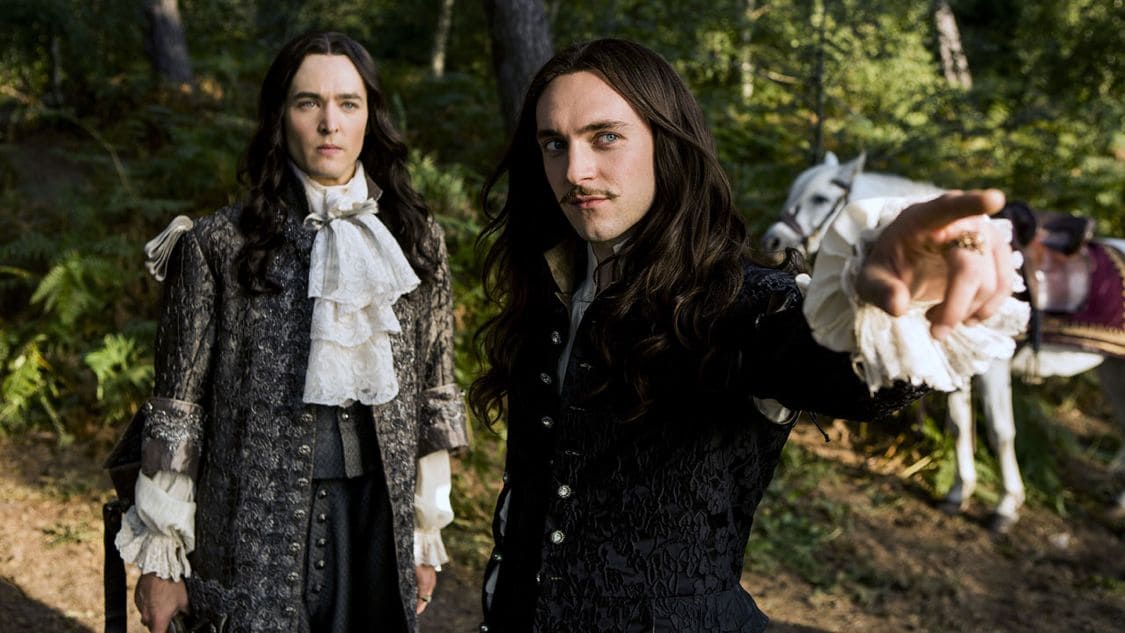 VERSAILLES is a British-Franco-Canadian production that started airing overseas nearly a year ago, and comes to Ovation in the United States on October 1st. Taking place during the construction of the titular setting, it focuses on King Louis XIV, his struggles, his sexual dalliances, and his accomplishments, not necessarily in that order.

Louis XIV (George Blagden, Vikings) is an interesting figure. Paranoid, but not unnecessarily so, as there really are people out to get him. Self-doubting, but not hampered too much by it, at least in action if not in thought, as evidenced by his grand plans for Versailles. Promiscuous, very much so, sleeping with many women, including, but not limited to, his wife, Marie Therese (Elisa Lasowski, Eastern Promises), his sister-in-law, Henrietta (Noemie Schmidt, The Student and Mister Henri), and Francoise-Athenais (Anna Brewster, Star Wars: The Force Awakens).

The necessity of all of the women is, of course, to produce an heir, but does Louis XIV need to be with quite so many women to do so? Certainly his wife is not quick to bear him a son, and theirs is an arranged marriage in order tie France to Spain, her homeland. And sure, in this era, monarchs do sleep with multiple women, and are not wholly expected to be faithful to their spouses. But, at least to me, it seems like Louis XIV gets around more than most (with some notable exceptions).

I mentioned that one of Louis’s lovers is his sister-in-law, and that plays into the very interesting relationship that Louis XIV has with his brother, Philippe I, Duke of Orleans (Alexander Vlahos, Merlin). The two don’t seem overly competitive in the show, with Philippe knowing his place, and not seeming overly interested when the possibility of becoming king is floated by him (though he isn’t uninterested, either). But Philippe does get frustrated when Louis doesn’t allow him to fulfill his potential. One wonders if he knows that his brother and wife are hooking up, though given Philippe’s leanings, I’m not sure he’d care even if he did know.

No, Philippe does not seem to be who Louis should be concerned about, at least not right away, but there is plenty of palace intrigue occurring. Some of it comes from noble families with bruised egos, and some of it comes from those who wish to save France from being bankrupted by Louis’ wars and construction projects. But Louis has his share of allies, too, so there will be plenty of battles, both overt and subtle, to fight over the course of the series, which has already filmed a second season and been renewed for a third.

My favorite things about VERSAILLES are in the visuals. It looks pretty stunning, both the costumes and the sets, which include exteriors. The Palace of Versailles is quite well known, and seeing its erection, even in small part, is pretty cool. The acting is also pretty solid throughout, too.

Where the show fails for me is in pacing. It is excruciatingly slow, and I find myself frequently becoming bored. Slow is not always a bad thing when you’re drawn in by the intensity of the performances, but that isn’t the case here, with the story lacking any urgency or super high stakes (since we know Louis isn’t really about to be assassinated or overthrown or anything). With an historical drama, this is always a challenge, and for me, VERSAILLES doesn’t manage to overcome it well enough. Also, some of the characters look a little too similar, making it hard to distinguish between them at times.

Overall, I thought VERSAILLES does some cool things, but it probably isn’t for me. If you like historical pieces, though, check it out, as you may disagree. VERSAILLES airs October 1st at 10/9c on Ovation.