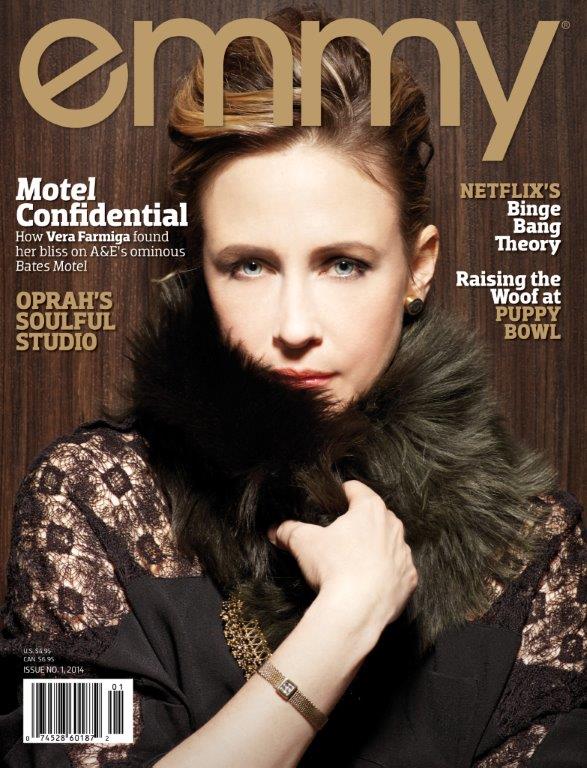 Vera Farmiga, star of A&E’s Bates Motel, shows off her elegant side on the first 2014 issue of the award-winning emmy® magazine, the official publication of the Television Academy. The actress dons a black Roland Mouret wool and lace dress, adorned with a black fur snood by Whit. Inside, photographer Scott Council captures Farmiga looking strong and statuesque in a wintry Vancouver setting, where the actress had been filming the second season of Bates Motel. The latest issue of emmy® magazine will be on sale starting today; for a behind-the-scenes look at the photo shoot, visit www.emmymagazine.com.

Farmiga debuted in the Emmy® competition last July when she was nominated as outstanding lead actress in a drama series for her critically acclaimed role as the mother of all madness, Norma Bates. The series’ executive producers Carlton Cuse andKerry Ehrin identified Farmiga as their muse from the very beginning, “We needed an actor who had to be warm and sympathetic, who is capable of being a little nutty, but she had to be beautiful, sexy, smart,” says Cuse. “In both our minds, there was no one better than Vera.” The actress accepted the role, crediting great timing and the type of challenging role she was looking for. “I was fascinated with her. She’s absolutely ridden with contradiction, and that pendulum swing is very exciting for an actor,” Farmiga says about her character. Costar and on-screen son Freddie Highmore is amazed at her ability to be incredibly professional and devoted to her character, all while maintaining her proudest role — mother of two. “Every take is completely natural,” he says of Farmiga. “Obviously the preparation is all there, but then she has the confidence to disregard it and let whatever happens happen… Being in a scene with her, you’re always kept on your toes and alive to the fact that new things can come at any moment,” Highmore explains.

The latest issue also includes interviews with Oprah Winfrey and OWN and Harpo Studios presidents Erik Logan and Sheri Salata on reversing the fortunes of their young network, learning the cable business and increasing the impact of their programming through social media; Ted Sarandos, chief content officer of Netflix, Roy Price, director of Amazon Studios, andVerne Gay, TV critic for Newsday, discuss the power and passion behind binge watching, as well as its place in the future of television; actor Josh Holloway discusses his battle with nerves early in his career, auditioning for his groundbreaking role in ABC’s Lost and his next chapter as a husband, father and a high-tech spy in CBS’s Intelligence; and an in-depth, behind-the-scenes look at Animal Planet’s 10th Annual Puppy Bowl.

Features and profiles in this issue of emmy magazine also include: a look at Pretty Little Liars’ homage to 1940s film noir in the February episode “Shadow Play”; Vikings actress Katheryn Winnick talks about her roots in taekwondo, paying her dues in Hollywood and reading fem-power biographies for inspiration; actor Brian Van Holt on his balance between Bobby, his endearing character on TBS’s Cougar Town, and his edgier portrayal as Ray in FX’s The Bridge; the Esquire Network and NBC Universal’s mission to pursue the holy grail of demographics and the future beyond unscripted programming for the rookie network; a look at Starz’ new eighteenth-century pirate saga Black Sails from Jonathan E. Steinberg and Robert Levine as they try to stay grounded in historical reality; Comedy Central’s new funny-girl duo Abbi Jacobson and Ilana Glazer discuss their idol, Amy Poehler, and her influence in bringing Broad City from the web to TV; Isaac Lee, CEO of Fusion, the new network from ABC News and Univision, explains plans for getting millennials to watch TV; NAB president Gordon Smith looks at the future of broadcast television.

Highlights from this issue of emmy include: