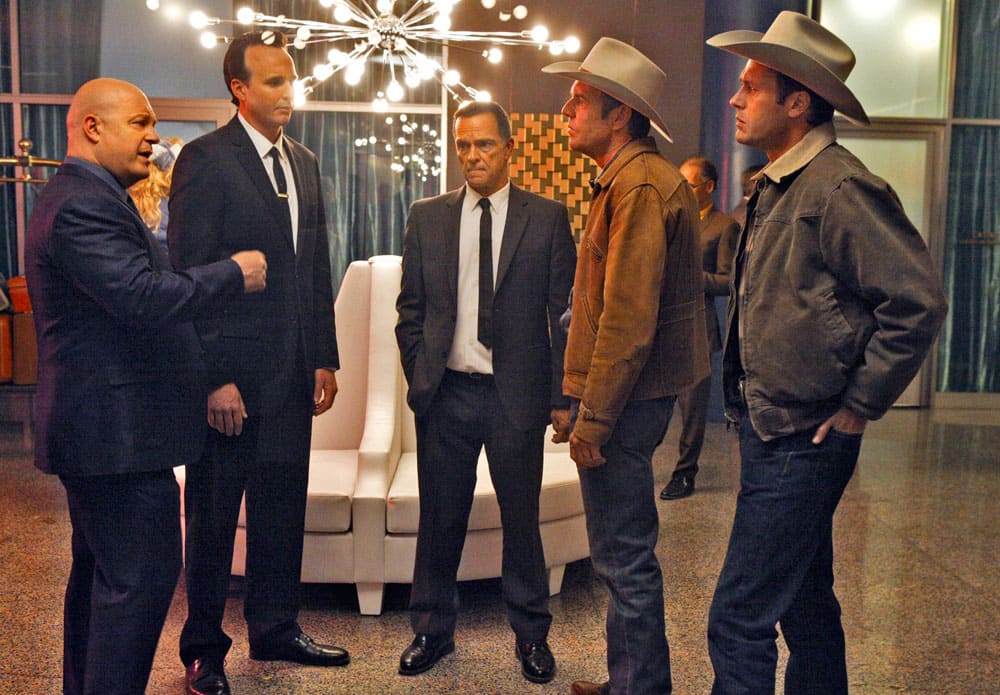 Las Vegas, 1960. This is the time and place that CBS’s new drama, VEGAS, is set in. Supposedly based on a true story, the series follows Ralph Lamb (Dennis Quaid, The Special Relationship), a rancher dissatisfied with what progress is doing to his land and herd, who is tasked by the Mayor (Michael O’Neill, The West Wing), his old army commanding officer, with stepping up as sheriff of the rapidly-growing casino city. It’s the formula for an exciting, historical fiction show that could be quite cool.

Lamb is a familiar character. Much like the central sheriff in this summer’s Longmire, he is gruff, a bit stuck in the past, but intelligent and fair. Quaid lends much gravitas to the show, having such a successful movie career prior to his job. That’s mainly what sets Lamb apart, since it’s not that fresh a take on the staple part. The way he looks into the murder, avoids working with men he doesn’t trust, and keeps a level head when the others scream that the up-to-no-good bikers did it (they didn’t) is the epitome of the classic Western hero.

Lamb has a crew to assist him. His brother, Jack (Jason O’Mara, Terra Nova), doesn’t really have any personality qualities of note in the “Pilot,” but seems loyal and smart enough. Ralph’s son, Dixon (Taylor Handley, Hidden Palms), is an idiot screw up who gets into far too much trouble for his own good. Lamb doesn’t want to give his son the power of the badge, but it’s a better option than letting Dixon run the ranch into the ground, allowing Lamb to keep an eye on him. And apparently, though we don’t see them, Lamb has enough competent employees to keep his ranch running without much guidance from him. Which makes one wonder why Lamb needs to spend so much effort and care on the ranch before he is tapped to become sheriff.

Lamb’s main obstacle in his new career is Vincent Savino (Michael Chiklis, No Ordinary Family), a mobster recently arrived in Las Vegas, who plans on making a ton of money by whatever means necessary. Vincent is the stereotypical thug, not opposed to beating the crap out of people, but ready with a slimy smile to make a veiled threat or grease a palm. We see in the “Pilot” that Savino can have compassion as he apologizes to a faithful informant who is unfairly beaten, but it is probably only demonstrated to serve his own needs.

Rounding out the cast is A.D.A. Katherine O’Connell (Carrie-Anne Moss, Chuck). Her boss clashes with Lamb because he’s the type who would rather take bribes from gangsters like Savino than put any effort into dispensing actual justice. O’Connell disagrees, of course, probably without knowing the full extent of the corruption, though she usually bites her tongue to keep her job. She has a romantic interest in Lamb, a widower, so it’s pretty clear what side she will fall on with the inevitable confrontation arises.

The problem with VEGAS is that it brings together a totally predictable group of characters in a very familiar situation. What one may forget when star struck by the stellar cast, or while admiring the terrific sets and costumes, is that there isn’t anything new or original here; it’s the same old stuff that is on other shows in a different package. I admit, the presentation is of a higher quality than in most productions. But that’s just putting a fresh coat of paint on the same old wagon. The axle is still rusty.

Now, if VEGAS would fully embrace the history lesson, even with the dramatic license taken by Hollywood, I could get on board. Even as O’Connell and Lamb sway to the rote dance steps, or as Savino does exactly what we think he’s going to do, it would be interesting because there is a complete story to tell over several years, with growth and twists. It wouldn’t live up to the epics that HBO and AMC put out, but it would be something pretty novel for network television.

Unfortunately, from the “Pilot,” at least, it looks like any greatness will be tampered dull by making Lamb solve a case of the week. This is a CBS staple, a network built on its procedural crime dramas. True,  VEGAS will be in a league of its own in that genre, and should be really cool for people who like this type of series. But for those who don’t want the same story virtually every week, though, signs are not looking good for the long-term prospects of the show.