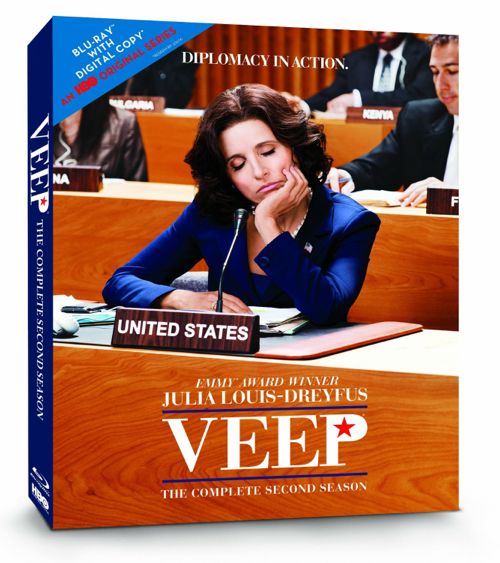 Seat42f and HBO Home Entertainment have teamed up to give ONE lucky winner a copy of VEEP Season 2 on BLURAY. For a chance to win leave a comment below telling us why you want to add VEEP Season 2 to your BLURAY collection. Only one entry per person. Contest ends April 8th. Winner will be notified on April 9th via email so make sure to use a valid email address when you post your comment.

The votes are in, and VEEP is “one of the funniest shows on television” (The Wrap). In Season 2 of the acclaimed HBO comedy series, which follows the day-to-day life of Vice President Selina Meyer (Julia Louis-Dreyfus, winner of the 2012 and 2013 Emmys for Outstanding Lead Actress in a Comedy Series for her role in VEEP), Meyer puts out political fires, juggles a busy public schedule and demanding private life, and defends the president’s interests. From Academy Award nominee Armando Iannucci (In the Loop), the show’s hilarious political humor is “rapid-fire…good fun” (Entertainment Weekly). VEEP: The Complete Second Season will arrive on BD with Digital Copy ($49.99) and DVD ($39.98) on March 25, 2014, loaded with even more laughs thanks to hilarious deleted scenes and four audio commentaries with cast and crew.

In Season 2 of VEEP, as midterm elections loom, Vice President Selina Meyer is scoring higher ratings than the president in several popularity polls, which she hopes will boost her influence and help her curry favor with the chief executive. But despite her best intentions, even the most banal actions can set off unexpected and often disastrous consequences. Her staff – played by an ensemble cast the Washington Post calls “terrific” – including 2013 Emmy winner for Outstanding Supporting Actor in a Comedy Series Tony Hale (Arrested Development), Emmy nominee for VEEP Anna Chlumsky (In the Loop, My Girl), Matt Walsh (HBO’s Hung), Reid Scott (My Boys), Timothy Simons (Days Together) and Sufe Bradshaw (Overnight) – is close at hand with a laugh-out-loud combination of personal problems and government-insider antics.