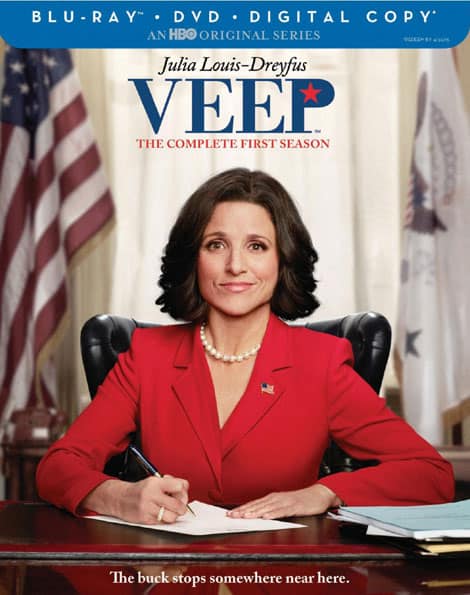 Seat42f and HBO have teamed up to give FOUR lucky winners a copy of VEEP Season 1 on BLURAY. For a chance to win leave a comment below telling us why you want to add VEEP Season 1 to your BLURAY collection. Only one entry per person. Contest ends April 2nd. Winners will be notified on April 3rd via email so make sure to use a valid email address when you post your comment.

The new HBO comedy Veep, about a woman who becomes vice president, only to discover the job is nothing like she expected, but everything she was warned about, was hailed as “hysterical” (TV Guide) and “sophisticated” (People Magazine). Created by Armando Iannucci (Academy Award® nominee for co-writing In the Loop), the series was nominated for three 2012 Emmy® Awards winning one for its star Julia Louis-Dreyfus (Outstanding Lead Actress in a Comedy Series). Veep: The Complete First Season, releases on Blu-ray with HBO Select* ($49.99), DVD ($39.98) and Digital Download on March 26, 2013.

Former senator Selina Meyer was a rising star in her party, a charismatic leader who seemed to have unlimited potential. Some pundits thought she might even occupy the White House someday. Then she became vice president. Veep follows the whirlwind day-to-day existence of Vice President Meyer as she puts out political fires, juggles a busy public schedule and demanding private life, and defends the president’s interests, even as she tries to improve her dysfunctional relationship with the chief executive.