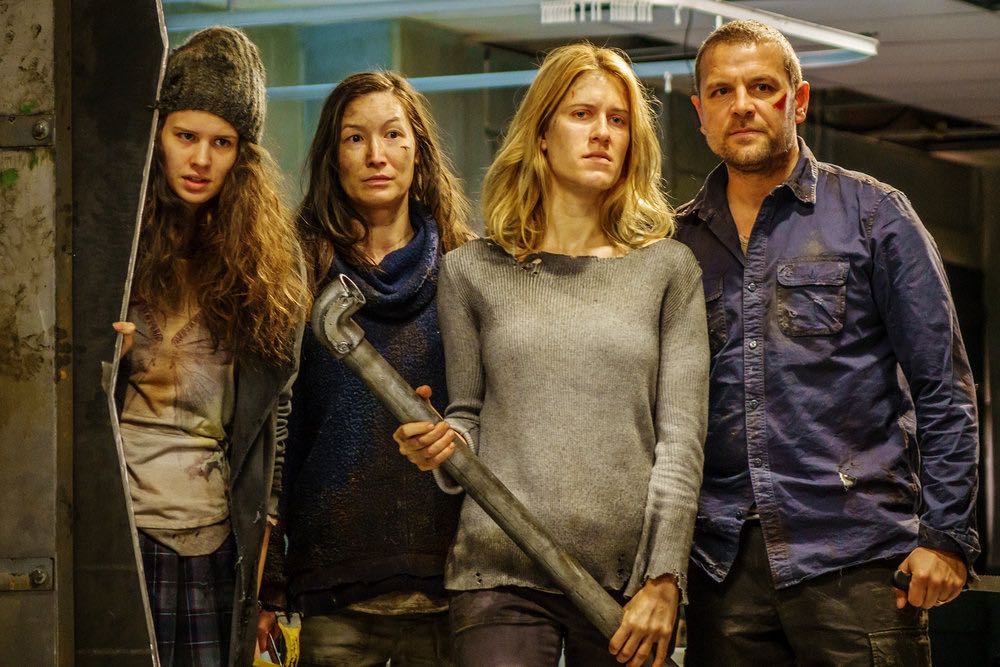 SyFy had such success with Wynonna Earp earlier this year that it’s no wonder they’d aim to get a second female-led reboot of a classic character back on the small screen ASAP. This time, it’s the VAN HELSING character from Dracula who receives the twist, with the story taking place in a near future where the world has been overrun by vampires. Can she save the world?

Kelly Overton (True Blood, Legends) stars as Vanessa Van Helsing, a woman who has been asleep for at least three years. Standing guard over her is Axel (Jonathan Scarfe, Ties That Bind), a military man who doesn’t know why she’s important, but knows it’s his job to protect her and the doctor who cares for her (Rukiya Bernard, The Stagers). When an old friend of Axel’s, Ted (Tim Guinee, The Good Wife, Revolution), shows up with a small group of survivors, things change for Axel and his charge.

I like that the pilot doesn’t jump straight into the action, and is just the beginning of the story, not a pattern that will be repeated week after week. It takes its time introducing the characters and letting the audience figure out who is important, which isn’t entirely clear in the first hour (though the main cast is listed on the show’s website). It doesn’t even introduce a lot of the major players in the initial offering, though since the series is airing two episodes back-to-back on premiere night, that might be saved for the second half.

I also like that VAN HELSING isn’t confined by the literary character on which it is so loosely based. Sure, I like a good Dracula adaptation, but that probably wouldn’t fit the network’s brand, whereas a slight-future reimagining totally does. Overton is believable enough as a woman desperate to find her daughter, who is somehow also a superhero that could possibly change the world, and her mission is one people will root for.

What I don’t like is that there aren’t any real stakes here (hehe), at least not at first. So Van Helsing has some powers, so what? It’s not like she can do something that will end the vampire reign overnight. Sure, she gives survivors a fighting chance, but it doesn’t seem like there are that many of them left anyway. They might secure a city or an area, but really, what’s the point? Axel isn’t likely to ever get his Kit Kat bars back.

Which means there has to be more to Vanessa Van Helsing that even what we’re seeing. But the problem is, she isn’t likeable or sympathetic, and neither is Axel, who are the two characters who really get developed in the pilot. There’s no purchase to really cling to; nothing to drawn you in. I’m sure, given time, I could learn to enjoy these characters, but the fact that there’s no charm or vulnerability early on makes me less likely to stick it out.

I am intrigued by two characters. Sam, a deaf, observant man, is played by Christopher Heyerdahl. There’s nothing to really get me excited about Sam so far, but I loved Heyerdahl in Hell On Wheels, so I want to see what he’s doing here. I’m also very intrigued by Flesh (Vincent Gale, Bates Motel), (SPOILER ALERT, though it is listed on the Cast page of the official website) a vampire who turns human again after biting Van Helsing. While I’m sure there will be Angel-esque guilt, I am curious to see how VAN HELSING uses such a role.

But those things aren’t really enough to get me into the show. If anyone who isn’t sucked in by the first hour gives it more of a chance and thinks it significantly improves over time, let me know. Otherwise, in an era of peak TV, I just don’t have time for this one.