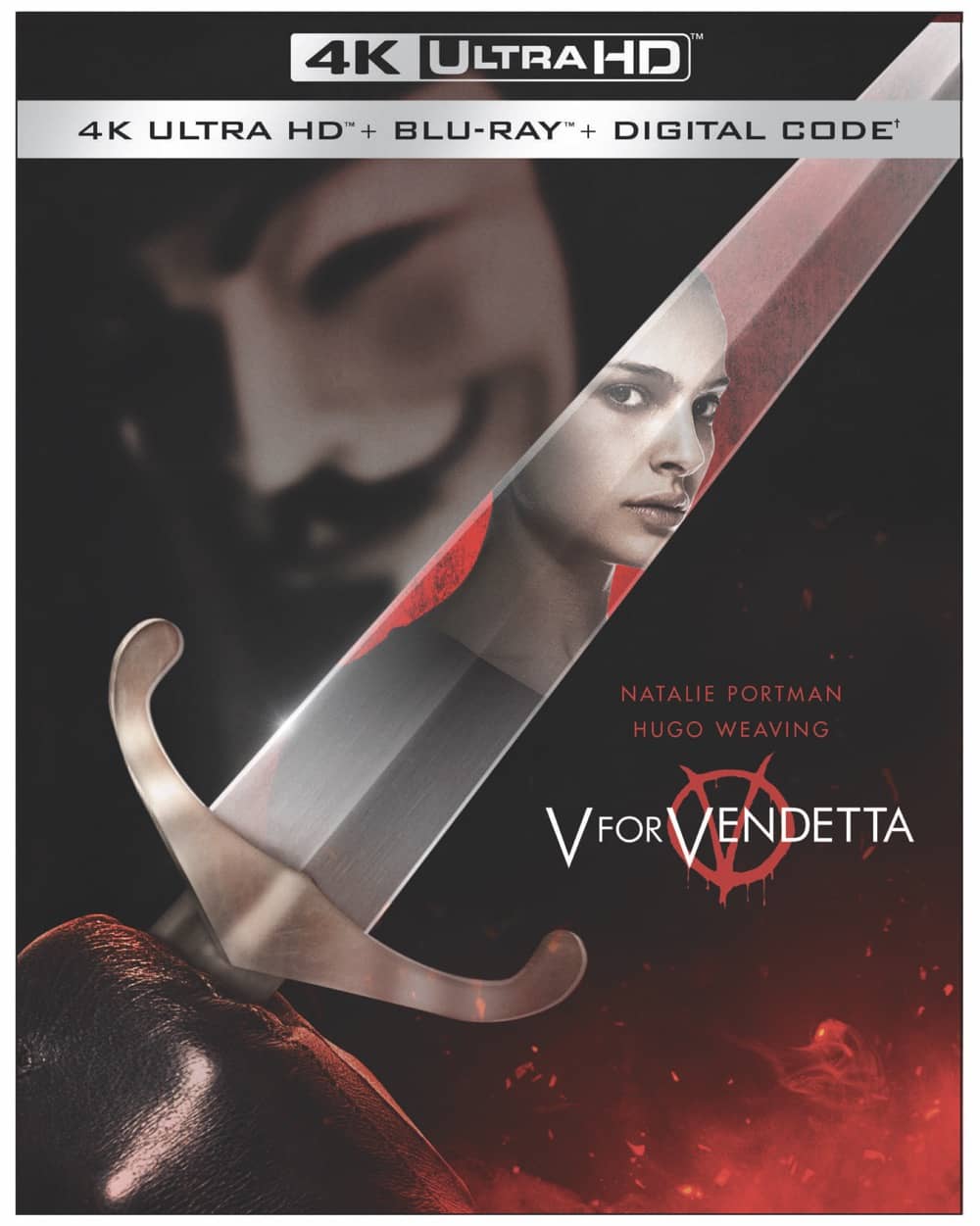 Warner Bros. Home Entertainment announced today that DC’s V for Vendetta, 2005’s thought-provoking action thriller from the creators of The Matrix trilogy, will be released on 4K Ultra HD Blu-ray Combo Pack and Digital HD on November 3rd, 2020. From producer Joel Silver, V for Vendetta was written and produced by the Wachowskis (The Matrix Trilogy), and stars Natalie Portman and Hugo Weaving. The film was directed by James McTeigue (Ninja Assassin).

The 4K UHD release of V for Vendetta is from a new scan of the original camera negative. 4K Ultra HD** showcases 4K resolution with High Dynamic Range (HDR) and a wider color spectrum, offering consumers brighter, deeper, and more lifelike colors for a home entertainment viewing experience like never before.

The V for Vendetta Ultra HD Blu-ray Combo Pack features an Ultra HD Blu-ray disc with the feature film in 4K with HDR and three new special features, a Blu-ray disc with the film in high definition and the previously released special features in high definition, and a Digital version of the movie. Fans can also own V for Vendetta in 4K Ultra HD via purchase from select digital retailers beginning on November 3rd.

SYNOPSIS
Set against the futuristic landscape of totalitarian Britain, V for Vendetta tells the story of a mild-mannered young woman named Evey (Portman) who is rescued from a dire situation by a masked vigilante (Weaving) known only as “V.” Incomparably charismatic and ferociously skilled in the art of combat and deception, V ignites a revolution when he detonates two London landmarks and takes over the government-controlled airwaves, urging his fellow citizens to rise up against tyranny and oppression. As Evey uncovers the truth about V’s mysterious background, she also discovers the truth about herself – and emerges as his unlikely ally in the culmination of his plot to bring freedom and justice back to a society fraught with fear, cruelty and corruption.

Previously released Special Features on Blu-ray Disc:
Freedom! Forever!: Making V for Vendetta – The cast and crew of V for Vendetta reveal the intense filmmaking process
Designing the Near Future – A look at the artistic process of creating the frightening future world of V
Remember, Remember: Guy Fawkes and the Gunpowder Plot – The history behind the story of Guy Fawkes
England Prevails: V for Vendetta and the New Wave in Comics – The origins of the original V story is illuminated
Cat Power Montage – Cat Power song played under images of the film
Theatrical Trailer
Easter Egg: Hidden Bonus: Saturday Night Live Digital Short