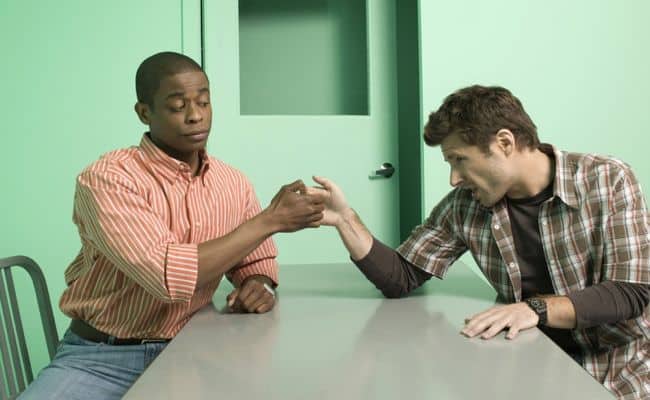 On the heels of a seventh consecutive win as the most-watched cable network, USA Network today ordered an eighth season of its longest running series on-air, and comedy favorite, PSYCH.  Santa Barbara’s favorite faux psychic and his sidekick, played by James Roday and Dulé Hill, will return with eight new episodes featuring the zany crimes, hilarious antics and a bevy of guest stars that the series has been known for since its premiere on USA in 2006.  The announcement was made today by USA Co-Presidents Chris McCumber and Jeff Wachtel.

“PSYCH is one of those rarities – a show that continues to grow its fan base season after season, with exceptional storytelling, a consistently inspired cast and talented guest stars,” said McCumber and Wachtel.  “We thought Shawn Spencer would have seen this coming….”

PSYCH returns for its seventh season on Wednesday, February 27 at 10/9c and this season will also celebrate its 100th episode milestone.  The series has also continued to grow with season six performing as the show’s strongest ever among P18-34 and among total viewers, the show’s average last season was 4.5 million – retaining almost all of the Season five audience.

With 2.5 million Facebook fans, affectionately known as PSYCH-Os, this cult favorite stars Roday as a police consultant who solves crimes with powers of observation so acute the precinct detectives think he’s psychic. With help from his best friend and reluctant sidekick (Hill), he continues to solve the mysterious and often bizarre crimes of the Santa Barbara Police Department.  PSYCH also stars Corbin Bernsen, Timothy Omundson, Maggie Lawson and Kirsten Nelson.