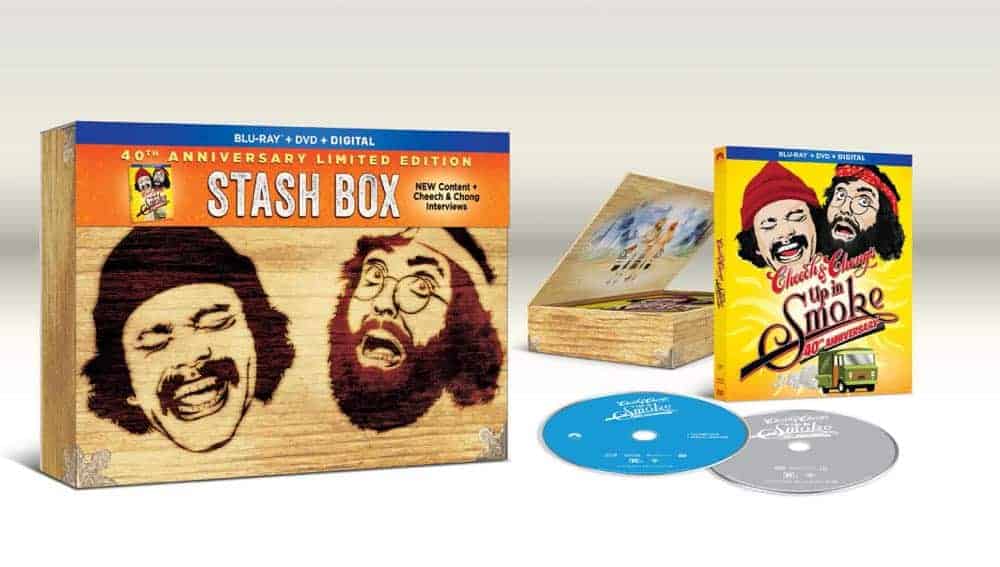 Seat42F and Paramount Home Media have teamed up to give ONE lucky winner an awesome UP IN SMOKE Stash Box pictured above and TWO runners up a copy of UP IN SMOKE on Blu-ray. For a chance to win send an email to [email protected] and tell us why you want to add UP IN SMOKE to your Blu-ray collection. Only one entry per person. Contest ends April 27th. Winners will be notified on April 30th via email.

The UP IN SMOKE Stash Box Is Only Available At FYE

Fire up the home entertainment system and call your buds because the ultimate stoner comedy is celebrating its 40th anniversary.  The high-larious cannabis cultural epic  breakthrough UP IN SMOKE will “… grab you by the poo poo” all over again when it arrives on Blu-ray Combo Pack and DVD April 10, 2018 from Paramount Home Media Distribution.  A special Deluxe Collector’s Edition, pairing the Blu-ray with the original soundtrack on CD and VINYL LP in deluxe packaging, will arrive the following week on 4/20 from Rhino, featuring a newly recorded “2018 version” of the title song “Up In Smoke.”

In 1978, Cheech Marin and Tommy Chong made their feature film debut in UP IN SMOKE, the outrageously funny classic inspired by their now legendary comedy routines of the early ‘70s.  Following massive success with over 10 million comedy albums sold, four Grammy nominations and a win for Best Comedy Recording for “Los Cochinos,” Cheech and Chong took Hollywood by storm when UP IN SMOKE became a smash hit, establishing the pair as the reigning comedy duo of a new generation.  Today, the film still has viewers rolling in the aisles and maintains surprising cultural relevance four decades after its original release.

“The greatest thrill is making your first movie and this one has been seen and been influential all over the world for over forty years,” said Richard “Cheech” Marin.   “Up in Smoke started stoner movies and is still going strong so smoke it up one more time.”

“Where did the time go? 40 years ago we made low budget movies that grossed over 100 million and are still being watched all over the world! And it also helped legalize an important medicine,” said Thomas Chong.  “I am so proud that a movie bearing a title of a simple song I wrote would be so influential for so many years.”

In UP IN SMOKE Cheech and Chong play wannabe musicians and stoners who unwittingly smuggle a van made of marijuana from Mexico to L.A.  Their drug-laced humor keeps their spirits high as they unknowingly elude the police and meander their way to an outrageous finale at the Roxy Theatre in Hollywood where Cheech performs in a pink tutu and Chong plays drums in a red body suit with a Quaalude logo.

The UP IN SMOKE Blu-ray Combo Pack features a brand new short-form documentary entitled “How Pedro Met the Man: Up In Smoke at 40,” which chronicles the duo’s comedy history, as well as the origins and impact of the film itself. Capturing a complex and fascinating pop culture odyssey, the documentary incorporates new interviews with Cheech Marin, Tommy Chong and producer/director Lou Adler along with archival footage.  The Combo Pack is also loaded with previously released bonus material including deleted scenes, commentary, a music video and more.

The UP IN SMOKE Deluxe Collector’s Edition is presented in a 12×12 package, limited to 5,000 copies. The set pairs the Blu-ray with the original soundtrack on CD and VINYL LP, as well as a 7-inch picture disc, oversized “Up In Smoke” rolling papers, a film poster, and booklet with new essays by both Cheech Marin and Tommy Chong, along with rare and unseen photos. In addition to the new version of “Up In Smoke,” the CD also features another previously unreleased version of the song from 1978 with an additional Spanish verse by Cheech.