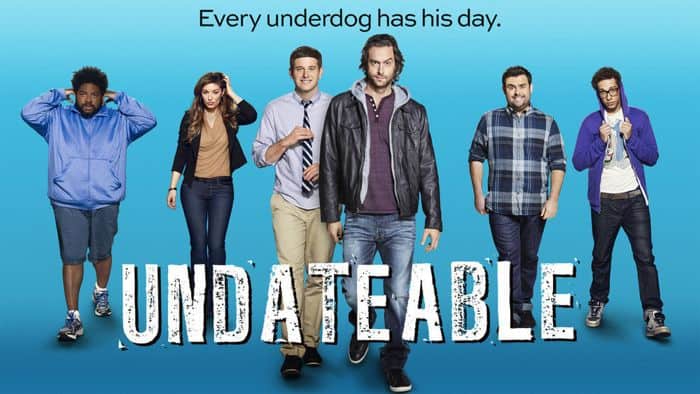 NBC has a new summer sitcom, which premiered last night, called UNDATEABLE. Created by Adam Sztykiel (Due Date) and Bill Lawrence (Scrubs), it is the story of a cocky womanizer who becomes friends with a gang of geeky losers. They all learn from each other and form tight bonds in a friendly, warm tale, a few laughs tossed in.

Unfortunately, that’s not very original. Because Lawrence’s name is on this project, I expect it will deepen and make us care about the characters soon enough, but the “Pilot” is not good at all and the second episode, “Pants Buddies,” which aired just after the first, isn’t much better. Don’t get me wrong, Lawrence can write a bond between two men like no other, but most of the rest of what’s going on just feels done and tired.

UNDATEABLE stars Chris D’Elia (Whitney) as Danny, the aforementioned asshole, who is quite likeable. D’Elia is mega talented, and I loved him on Whitney because of his chemistry with the titular character. On UNDATEABLE, he has to be a bit too much of a jerk too much of the time, hard to swallow given his charisma. He’s also undermatched by most of his co-stars, especially the one he interacts with most often.

The ‘straight’ man to this odd couple, Justin (Brent Morin, making his scripted TV debut), doesn’t work nearly as well. He feels very similar to the lead in another recent Lawrence show, Brody on Ground Floor, but without the charm of Skylar Astin, Morin doesn’t quite live up to the role. He’s whiny and boring, and while this sometimes works for the character that everyone else plays off of, I find myself not caring about Justin and being happiest when he is off screen.

Now, UNDATEABLE seems poised to hinge largely on the chemistry between Danny and Justin, and I just feel like it’s very one-sided at this point, D’Elia being much better than Morin. A major thrust of the story will also be how the two come to balance one another out, but given that the growth starts immediately, this doesn’t seem a sustainable concept. Turk and J.D. they are not, and without a compelling friendship here, which the series definitely lacks, I feel like it’s doomed to fail.

What may redeem UNDATEABLE a bit is the supporting cast. Briga Heelan is funny as Maddie, though since she also stars in Ground Floor, further reinforcing the Brody / Justin parallel since Maddie is Justin’s love interest, NBC is not able to list her as a main character, and she will likely only serve a recurring capacity. Bianca Kajilch (Rules of Engagement) is pleasing as Danny’s sister, Leslie, and the two actors work well together. Ron Funches, who plays Shelly, can deliver a line in an excellent, unique way, and steals virtually every scene he’s in. Even Brett (David Fynn), who initially seems bland, starts to add color in “Pants Buddies,” leaving Burski (Rick Glassman) as the one creepy, weak leak, other than Justin.

The dialogue is a bit clunky. Leslie has a line about a “herd of turtles” that feels ham-fisted at the start, and is confirmed to be so when it’s used for a story connection later. Danny’s repeated calling of Justin “baby bird” starts to become forced, and about half of the jokes land flat. The episodes are not helped at all by what I assume is a live audience, whose laughter frequently is much louder than the scenes warrant, becoming a distraction.

Now, Lawrence fans may remember how rocky Cougar Town began, but with a terrific ensemble of players, it quickly grew into a beloved favorite. I concede there could be potential for UNDATEABLE to follow that pattern if it ditches the Danny-teaching-everyone-to-date and everyone-teaching-Danny-to-care premise pretty quickly and expands the roles of Shelly, Brett, Leslie, and Maddie. Failing that, however, I don’t see continuing what’s presented in the first two episodes becoming a show I’d want to tune in to on a weekly basis.