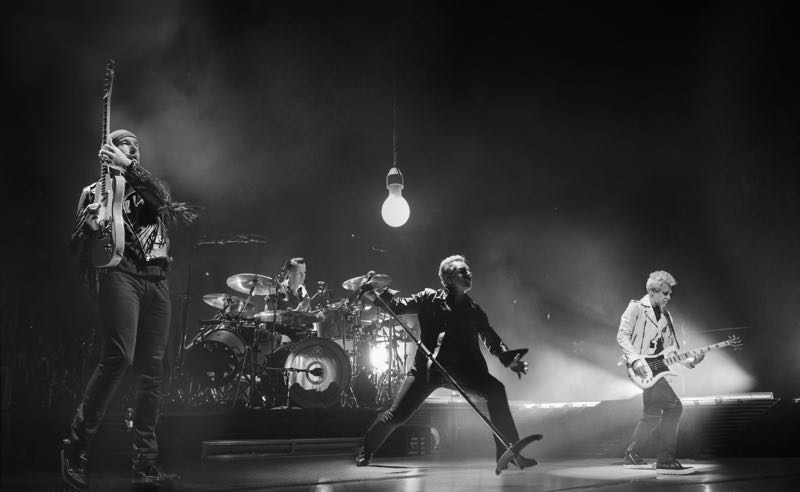 U2 and HBO will debut a unique combination of two exclusive world premiere specials this fall, it was announced today by Michael Lombardo, president, HBO Programming. First, to debut Nov. 7, a behind-the-scenes documentary offers unprecedented access to the band and the team that worked with them to conceptualize and create its current iNNOCENCE + eXPERIENCE world tour. The following week, the network will present the tour’s Nov. 14 performance, shot at the newly renovated Bercy Arena in Paris and aired exclusively on HBO that same day. Both the documentary and the concert will be available on HBO GO and HBO NOW simultaneous to the programs’ world premieres on HBO.

“U2 continues to take risks, which has made them one of the most consistently exciting forces in rock’n’roll,” said Lombardo. “The one-two combination of this documentary special, followed by the concert, will provide viewers with the ultimate look at this remarkable band behind the scenes and on the stage.”

The documentary takes a look into the creation of U2’s wildly innovative and widely acclaimed iNNOCENCE + eXPERIENCE world tour, which began May 14 in Vancouver and currently runs through November. The special will detail how a show of this magnitude is conceived, revealing the blood, sweat and imagination that have gone into making iNNOCENCE + eXPERIENCE, the tour that would ultimately “reinvent the arena show,” according to Rolling Stone’s opening-night review.

Interviews in the documentary include all four members of U2 – Bono, The Edge, Adam Clayton and Larry Mullen Jr. – as well as the supporting cast of Willie Williams, who has created tour concepts for the band for more than 30 years, award-winning designer Es Devlin, newly signed on for this tour, production director Jake Berry, audio director Joe O’Herlihy, executive director Gavin Friday, set designer Ric Lipson and others who bring iNNOCENCE + eXPERIENCE to life around U2’s music, night after night.

The special also explores the challenges and setbacks U2 faced in the months before tour rehearsals began in April, including Bono’s serious bicycle accident in New York last fall, and his — and the band’s — hard road getting back into “fighting shape” for their triumphant return with iNNOCENCE + eXPERIENCE. This exclusive documentary chronicles in detail how these same four friends, who started out as a humble punk band from the Northside of Dublin more than 30 years ago, continue to create magic nightly with the most grandiose, yet most intimate, arena tour ever staged.

On Nov. 14, the audience will see for itself the results of all of that hard work when U2 plays the Bercy Arena in Paris on the iNNOCENCE + eXPERIENCE tour, showcasing the inventive set that allows U2 to explore the concepts of iNNOCENCE + eXPERIENCE via a performance that literally moves throughout the venue via multiple stages, a one-of-a-kind interactive floor-to-ceiling arena-length LED screen that has earned its reputation as the fifth member of U2 on this run, and a radical new approach to surround sound that ensures everyone in the audience sees, feels and hears the show with maximum impact from every seat in the house.

And of course, there are the songs: The iNNOCENCE + eXPERIENCE setlists span the band’s entire career, from its 1980 debut album, “Boy,” to its most recent effort, “Songs of Innocence.” The concepts of innocence and experience are explored in vivid musical and visual detail, progressing from songs inspired by the members of U2’s earliest influences and formative life experiences through decades’ worth of indelible anthems from the band that has won more Grammys than any other living rock band.

The documentary will be produced and directed by Davis Guggenheim (the Oscar®-winning “An Inconvenient Truth,” plus “Waiting for Superman,” “It Might Get Loud,” featuring U2’s The Edge, and “From the Sky Down,” the 2011 documentary chronicling the recording and release of U2’s 1991 classic “Achtung Baby”) and produced by Shannon Dill, with U2 manager Guy Oseary serving as executive producer.

The concert will be produced by Done And Dusted with executive producers Hamish Hamilton, Simon Pizey, Davis Guggenheim and Guy Oseary. It will be directed by Hamish Hamilton, who has worked with the band since 2001, including such collaborations as “Elevation: Live from Boston,” “U2 Go Home: Live from Slane Castle,” the “Beautiful Day” documentary, and “Vertigo in 2005: Live from Chicago.” The youngest recipient of the BAFTA Special Award, Hamilton has directed and executive produced the London 2012 Olympic and ParaOlympic opening and closing ceremonies, and directed the last six Super Bowl halftime shows, multiple Academy Awards® ceremonies, the “Victoria’s Secret Fashion Show” for more than a decade, President Obama’s inaugural ball, MTV’s VMAs and many more.