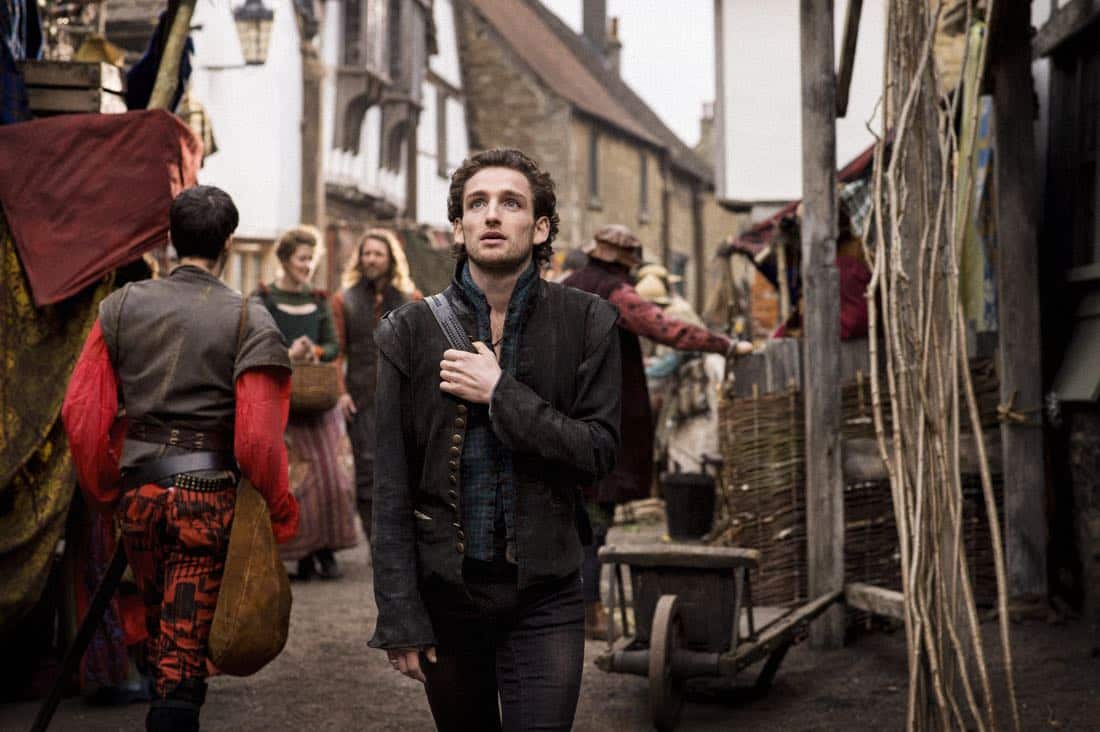 TNT’s newest series is WILL. That title could mean any number of things, but in this case, it refers to a very specific English playwright of great fame. In fact, I dare say every potential viewer already has knowledge and some opinion about the man. Using his first name instead of his last in the title probably seeks to disarm the audience, letting them know this is a more casual or ground-level version of the bard than what we are used to. But he is a figure who comes with all sorts of baggage, positive or negative, depending on your perspective.

Will is played by newcomer Laurie Davidson, and as the program begins, he is a mere eighteen years old. That does mean something a little different in the era of the piece, as Will already has a wife and three kids. But he’s still a young man who has not yet found his place in the world, pursuing his passion to the detriment of his family and normal expectation.

This means Will is neither fully hero nor villain. Some may write him off immediately, as his behavior is selfish, and I dare say he is a reprehensible father. This worsens as he engages in flirtation with young, pretty Alice (Olivia DeJonge, Hiding), though at least he’s honest with her about his status. We also know how great a mind he has, creating works that have lasted centuries and still resonate with many. So if he hadn’t had the courage to go after his dreams, the world may be deprived of his genius. This sets the character in shades of grey from the start.

I cannot vouch for how historically accurate WILL is. My guess would be that it’s about as realistic as The Tudors or The Borgias, maybe less so in design. There is a great deal of melodrama, and much is made over the relationship between Will and Christopher Marlowe (Jamie Campbell Bower, Camelot), whom some believe wrote or co-wrote some of the plays credited to Shakespeare. Of course the television series picks a stance on that, as it must. But who can say if they get it right or not? They do make it entertaining.

The best parts of WILL, for me anyway, are the characters of James Burbage (Colm Meany, Hell On Wheels, Star Trek: Deep Space 9) and Kemp (William Houston, Sherlock Holmes). They are delightfully colorful and keep the action moving. There is a lot of comedy in WILL, and much of it can be chalked up to Kemp, while Burbage is vitally important to the starting point of the story.

Less interesting is the subplot involving a young orphan pickpocket, and the one where a nobleman is trying to control the theatre scene. Basically, anything not involving Will and the theatre troupe he falls in with drags down the pacing and begins to get a bit boring. I do wonder if WILL did not spread itself too thin, though I understand they’re trying to make a series, not a miniseries, so need to have a lot going on.

I will hand it to TNT that they don’t just make the same show over and over again. WILL isn’t too much like any of their other series. I can’t call it a departure because, unlike with most networks, I couldn’t say for certain what the typical TNT series is. What I can say is WILL is of slightly better quality and boasts characters that seem, at least at first glance, to be a tad more complex than on most TNT shows. It definitely isn’t a procedural, which is always a plus for new shows.

Though, it also fails to get to the quality storytelling and production level of its peers on Netflix, FX, AMC, HBO, and more. Thus, while I did enjoy the first two hours of WILL, it was not enough to keep my attention. There was just too much wasted screen time and the lead isn’t as compelling as I need my leads to be to set a season pass.

WILL premieres tonight at 9/8c on TNT.