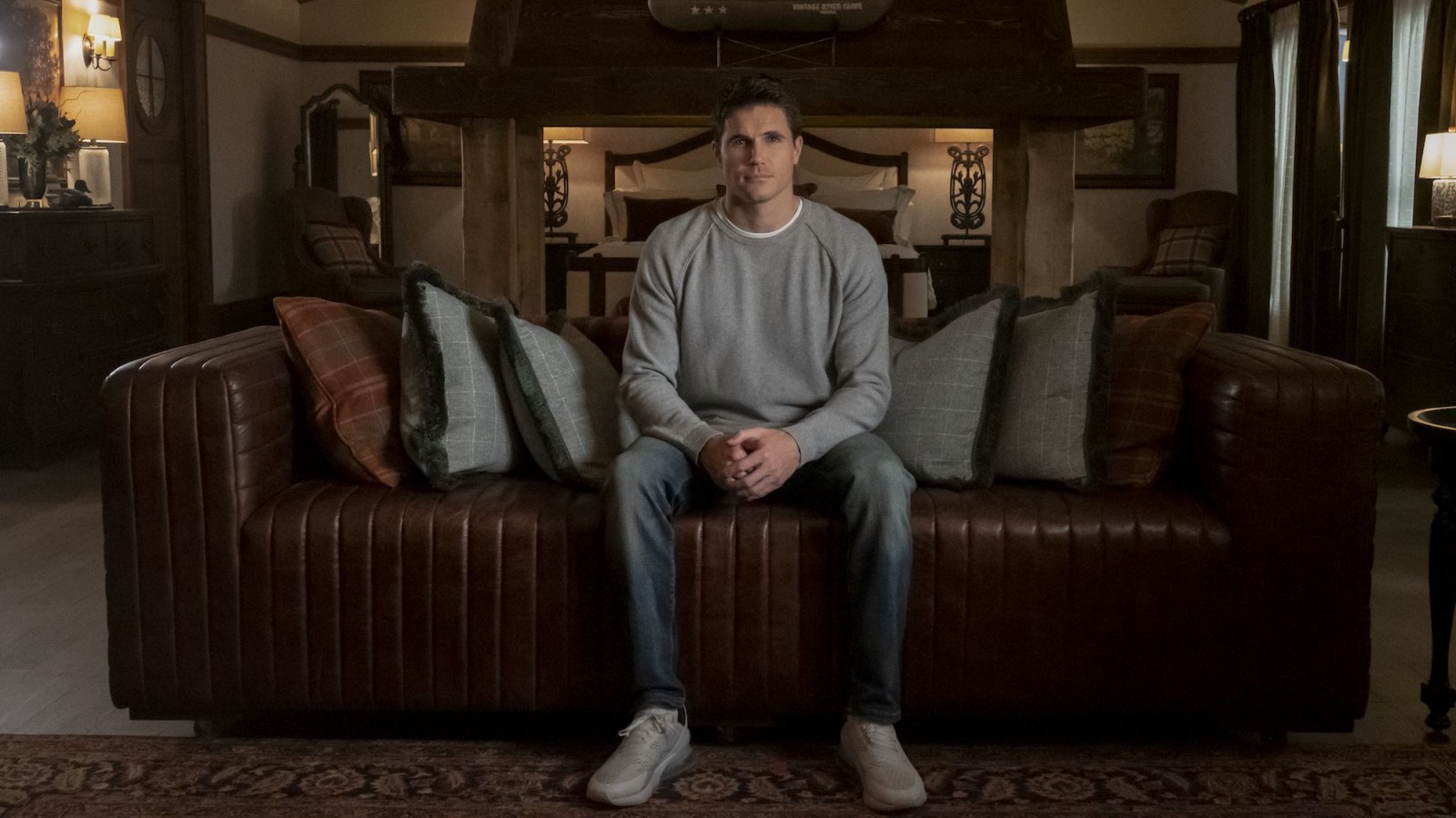 WARNING: The following contains spoilers from the first three episodes.

Greg Daniels, co-creater of The Office and Parks and Recreation, is back on television with the new Amazon Prime half-hour dramedy, UPLOAD. Set just over a decade in the future, it tells the story of a world in which the dying can upload their consciousness into the digital realm – for a fee. And like the apps of today, it’s connected very closely with anyone you want to interact with (even back in the real world), and has plenty of in-game purchases available. But there a dark underbelly to the satiristic story.

Robbie Amell (The Flash) stars as Nathan Brown, the protagonist who is killed in a malfunctioning self-driving car. He ends up in the app thanks to his rich girlfriend, Ingrid Kannerman (Allegra Edwards, Briarpatch), who wanted to marry him, but whom Nathan was trying to work up the nerve to dump. Once there, Nathan tries to accept his new status while feeling more and more isolated in the real world. Complicating this are missing memories and unanswered questions surrounding his demise.

Nathan is aided by Nora Antony (Andy Allo, Chicago Fire), the customer service representative that serves as his ‘angel’ in the afterlife. Nora is frustrated with her job and lousy corporate culture, but is drawn to Nathan, despite his unavailability, and finds personal motivation in building a relationship with him. (Jim Halpern, anyone?) Nora notices strangeness in Nathan’s case before he does, but is she really in a position to do anything about it?

UPLOAD is funny. One might even add a very to that statement. There are many visually humorous aspects to the situation present, and there’re some biting observations about modern society, especially concerning tech and corporate culture. This is a meaner, more raw version of what Daniels was saying in The Office, and it’s easy to appreciate the thought process that went into the making of this show.

However, sometimes believability is sacrificed for a laugh. Take, for instance, the scene in the pilot in which Nathan is shockingly uploaded. It’s hard to believe a hospital would have a window and allow family to witness such a thing, or that those who did witness were not prepared for the sight. We also are expected to believe that Nora suffers no direct repercussions for some of the acting out she does on the call center floor? And Ingrid unfortunately only becomes more cartoonish as the series unfolds.

One such thing that struck me very odd on the first viewing was Nathan’s behavior just before upload, but this has been explained away by further plot developments.

I like this show quite a bit, and it’s easy to devour in twenty-five minute chunks. (The pilot is double-length). The actors are universally charming, and the mystery adds a compelling through-line to a very interesting take on a man-made afterlife. Elizabeth Bowen (Resident Alien) may just out-Melissa-McCarthy Melissa McCarthy as amateur investigator Fran Booth. Owen Daniels (Space Force) is soooo creepy as the A.I. servant. There are also lots of answered questions that beg to be explored. A lack of aging and development in the app, for one.

But I do wonder just how amazing it could be with a few of the wrinkles ironed out. With just a bit more development time to really figure out those weak spots, I think this might even rise to the level of The Good Place, created by fellow Office and Parks alum Mike Schur (though of course the content is vastly different, despite both being about the afterlife). It is so close to being one of those shows you tell all your friends about. But it falls just slightly short, which doesn’t make it unwatchable, but definitely sparks a bit of longing for what might have been.