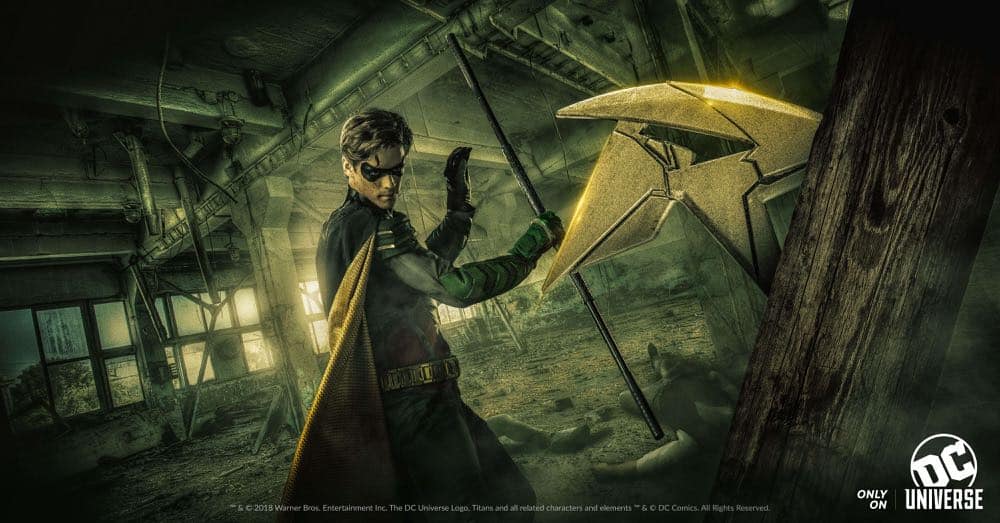 DC Universe is a new subscription service from DC Comics. Members get access to comic books, television shows, movies, and more from the company’s properties. To help gain subscribers, the service is also offering brand-new content, the first of which is a small screen drama called TITANS.

If you’re not familiar with the comic of the same name, or even the very-different animated series Teen Titans, TITANS is a group of young superheroes led by Robin, Batman’s former sidekick. There have been different versions, but this one is dark, very dark, and bloody. So adults only, please.

As we meet Dick Grayson (Brenton Thwaites, The Giver), his alter ego, Robin, hasn’t been seen in a year. Most people assume he’s dead. But really, he’s just working as a detective, recently transferred from Gotham to Detroit, Michigan. Grayson has a soft spot for battered children, possibly because of his own tragic past (his origin story is shown very briefly, and in a way that makes sense for the current story). Which leads him to Raven (Teagen Croft, Home and Away), a young girl suffering from something that looks very much like demon possession. Some very bad man are after her because of it.

There are four leads in the TITANS superhero team. I give credit to the show for not trying to rush them all together or give them equal time. Most of the pilot is focused on Grayson and Raven, first separately, then together, though not with the same amount of screen time. About halfway through, we also get a side story in Austria involving Kory Anders, a.k.a. Koriand’r, a.k.a. Starfire (Anna Diop, 24: Legacy). Except she doesn’t know any of those names, with no memory of who she is or what she is doing. Unfortunate, since, of course, there are men trying to kill her. And then the fourth member, Gar Logan / Beast Boy (Ryan Potter, Big Hero 6), is saved for just the closing scene of the episode, for a bit in Ohio. This feels more natural than most coming-togethers of super-powered teams.

It’s no surprise that TITANS’ pilot is well thought-out and cohesive. DC Universe has enlisted Greg Berlanti, creator of the CW’s DC Arrowverse, to oversee the project, alongside Fringe / Star Trek: Discovery writer / producer Akiva Goldsman and DC animated scribe Geoff Johns. These are three, well, Titans, of DC television, and it pays off to have the first effort headed up by people who already know what they’re doing.

While Marvel has dominated the film world for the past decade, DC is king of the small screen. It makes absolute sense to start developing work for their own streaming service, maybe even an integrated world, in the way Marvel has done with the movies, rather than just keeping feeding other networks. TITANS is the perfect entry point for this effort.

As for whether the price of DC Universe is worth it or not… Well, CBS All Access is my go-to example of bad pricing for a single network’s service. DC Universe is cheaper than CBS, as it’s commercial free at $7.99/month or $75/year, versus $9.99/month or $99/year (though CBS All Access offers a cheaper commercial version, whereas DC does not). However, it also looks to already have at least as much programming available as All Access, plus comics and other additions. While the library size pales in comparison to Netflix or Hulu, which are just slightly more expensive, it’s also more focused than any of the above, meaning subscribers will have more of what they want and less they’re not interested in. So yeah, I’d say it’s worth it, and despite (or because of) not having read hardly any of the comics, already purchased my year pass.

TITANS is available now exclusively on DC Universe, and releases a new episode every week.