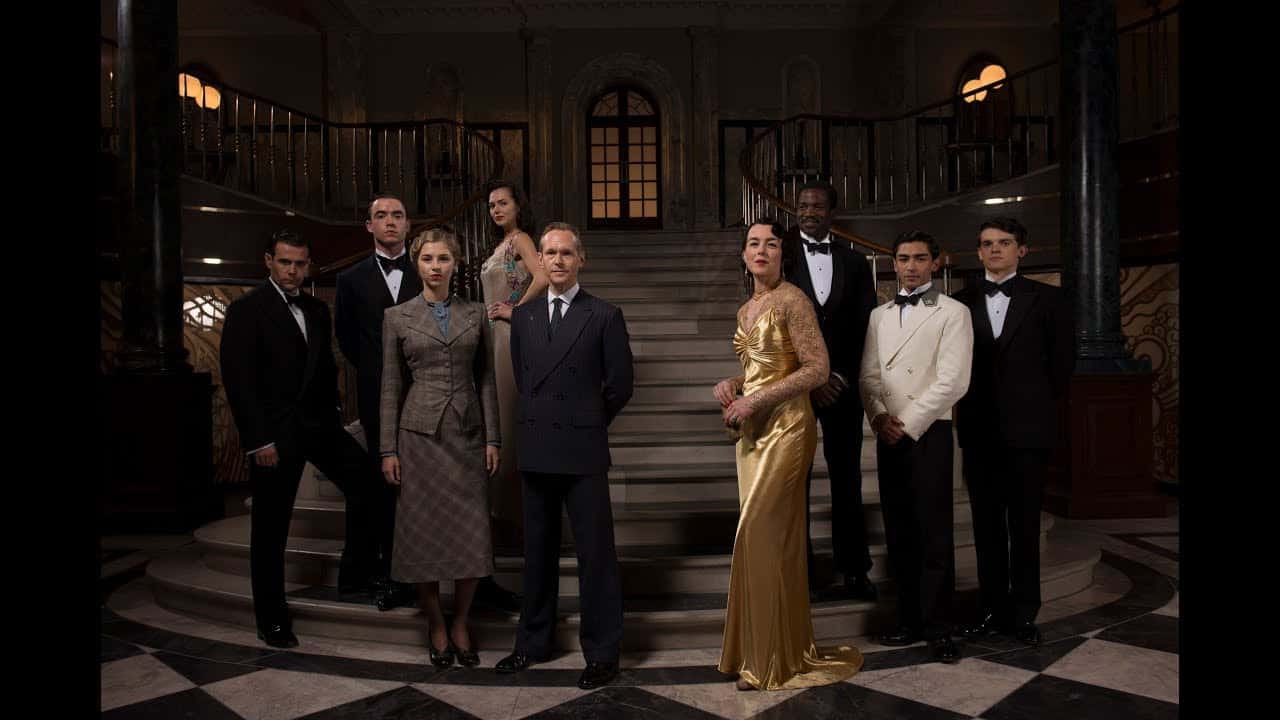 Ovation has imported the ITV series THE HALCYON, premiering tonight in the states. Set in a five-star hotel in London England in 1940, early in World War II, the show follows people of all classes, from the owner of the establishment and his family, down to the staff that keep things moving. The premise obviously sounds like Downton Abbey, but THE HALCYON is more gritty, with those coming to stay there engaged in a variety of scandalous, and in at least one case, Nazi-supporting, behavior that makes it more drama-filled than that former series.

At the center of things is Richard Garland (Steven Mackintosh, Luther), the general manager of the titular waystation. Richard is very customer service oriented, working to keep his employer, Lord Lawrence Hamilton (Alex Jennings, The Crown), happy, even when that goes against the wishes of Hamilton’s wife, Priscilla (Olivia Williams, Manhattan). Things get more difficult when Hamilton’s outspoken mistress, Charity Lambert (Charity Wakefield, The Player), decides to take on a more public persona. This does not go unnoticed by American reporter Joe O’Hara (Matt Ryan, Constantine), who is staying at the hotel. And then there’s Garland’s daughter, Emma (Hermione Corfield, xXx: Return of Xander Cage), who has a flirtation with Hamilton’s eldest son, RAF pilot Freddie (Jamie Blackley, If I Stay), who is in a relationship with someone else.

That is just the tip of the iceberg of events at THE HALCYON, which boasts a sprawling cast and many plot lines. It’s a classic soap opera, with lots of drama, too much at once to be thought realistic. The pacing is quick, moving through various threads, and it’s hard to keep track of everyone and their relationships to one another at first viewing.

It’s a very beautiful show, the production design and set decoration superb. Part of the joy of watching the series is just to imagine oneself in the hotel. Most of the characters, despite their bad behavior, adhere to the classiness of the setting in outward manner, painting us a picture of a specific place and time, or at least a fictionalized version of it. The world is enticing enough to quickly get sucked into the plot.

While not as high-quality as Downton Abbey in terms of storytelling, there’re enough elements to satisfy most. The lack of believability hurts, but the actors play the roles earnestly enough to keep viewers interested and invested. Coincidences may stretch the bounds, but there aren’t any big or obvious plot holes in the first hour.

In fact, my only complaint about the premiere is that it starts with the end of the season, then jumps back seven months. This has become overdone enough that I automatically roll my eyes at any series that dares still do it. However, for THE HALCYON, it’s less annoying than in most because with the density we’re about to jump into, it does provide an intriguing hook to get the audience to expend the effort learning all of the players.

My main caution with this show, though, is that it has already been canceled, and does not contain a definitive ending. Because it aired early in the year in Britain, you can google fan reaction, and a very vocal group are calling for its return to, in part, resolve major cliffhangers. As pretty as THE HALCYON is, knowing it is incomplete and extremely unlikely to be concluded is enough to make it a pass for me in the age of so many other options. Were it airing simultaneously and its future in doubt, I’d be tempted. As it stands, I don’t see the point of spending my time on it.

THE HALCYON premieres tonight at 10pm ET on Ovation.