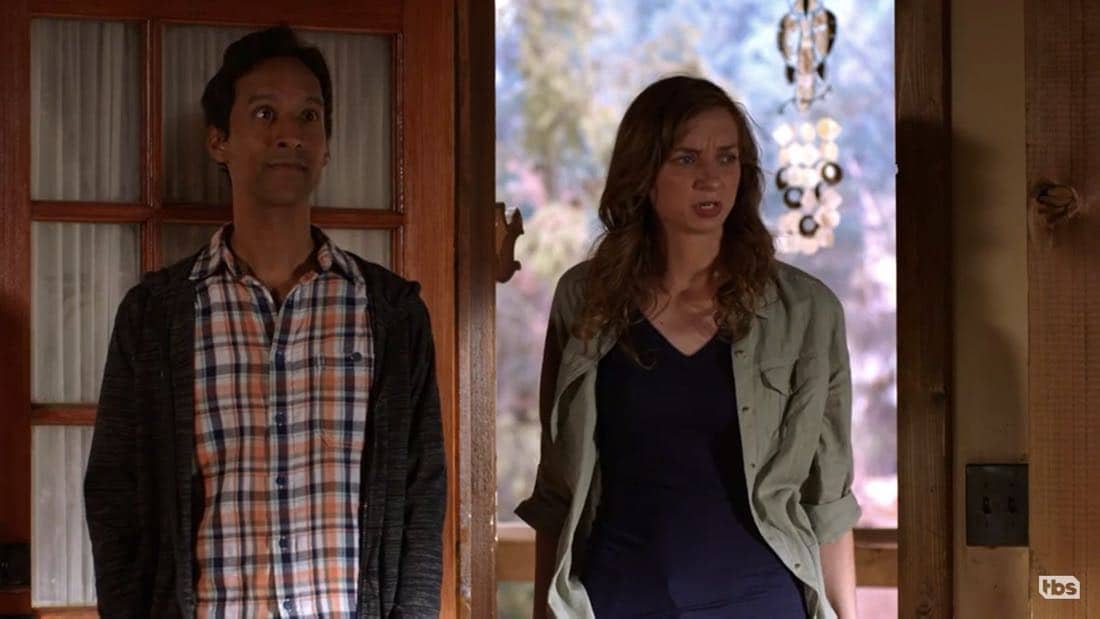 TBS has some bizarre sitcoms, and their newest, THE GUEST BOOK, should fit right in among them. Created by Greg Garcia, the mind behind My Name Is Earl and Raising Hope, the show is sort of an anthology series, in that each episode stars brand-new characters in self-contained stories as they check in for a few days at Froggy Cottage and write their stories in the guest book there. I say sort of because there is also a group of locals who have ongoing arcs on the fringes throughout most of the episodes, culminating in a wacky season finale.

Yep, I know how it ends because I watched all ten episodes of the first season in one sitting. While not the most ground-breaking or fresh new comedy I’ve ever seen, I was thoroughly charmed by Garcia’s sense of humor, as I have been many times in the past, and impressed by the parade of performers who came through. This combines the quirky charm Garcia is known for, portraying “regular” middle Americans, with another interesting premise.

Besides Dillahunt, Eddie Steeples (My Name Is Earl) plays another recurring local. This is notable because both starred in previous Garcia efforts. Other Garcia alum, such as Shannon Woodward (Westworld) and Jamie Pressley (Mom), pass through, and there are a host of references to Garcia’s past shows. This continuity, Easter eggs for fans of the writer’s work, is pleasing and makes the show more interesting. It helps create a feeling of family and warmth.

There are also some really clever, unique elements to THE GUEST BOOK. For instance, every episode (after the first) begins with two guys at a computer store recapping the ongoing plots in the context of a buddy trying to get his friend to watch the show. And there’s essentially a ‘house band’ that plays things out and provides bridges on a regular basis. These things kick the show up a couple of notches further.

I’d say the best way to judge the quality of such a show, though, is too at who the series got to headline the various installments, and that list is impressive to modern comedy and television fans. Stockard Channing (The West Wing), Jenna Fischer (The Office), Danny Pudi (Community), John Ortiz (Togetherness), Michaela Watkins (Casual), Arjay Smith (Perception), Lauren Lapkus (Orange Is the New Black), Laura Bell Bundy (Hart of Dixie), Kate Micucci (Garfunkle & Oates), Mary Lynn Rajskub (24), Andrew J. West (The Walking Dead), and my personal favorite from this season, Michael Rapaport (Prison Break), are among those who parade through. The great Margo Martindale (The Americans) also plays a recurring role. Having this kind of talent keeps the main plot engrossing, and is a good balance to the stories of the community.

Will this top anyone’s must-see list? Probably not. But is it an enjoyable way to pass a few hours? Absolutely. Garcia does ‘nice,’ non-judgmental, inclusive comedy as few others do, and I am always entertained and delighted by what he has to offer. Even in an increasingly crowded field of high-quality entertainment, he has a specific voice and style that is worth keeping around, and THE GUEST BOOK gives him time to really focus on key elements of the show in a way that he didn’t have the luxury to do on longer, broadcast-network seasons.

One last note, THE GUEST BOOK, interestingly, comes right on the heels of HBO’s Room 104, another anthology series set in a rental lodging, but the two could not be more different. If you want dark and science-fiction-y, go for Room 104. If you just want to laugh, and occasionally get your heart strings tugged on, then go with THE GUEST BOOK.

THE GUEST BOOK premieres tonight at 10/9c on TBS.