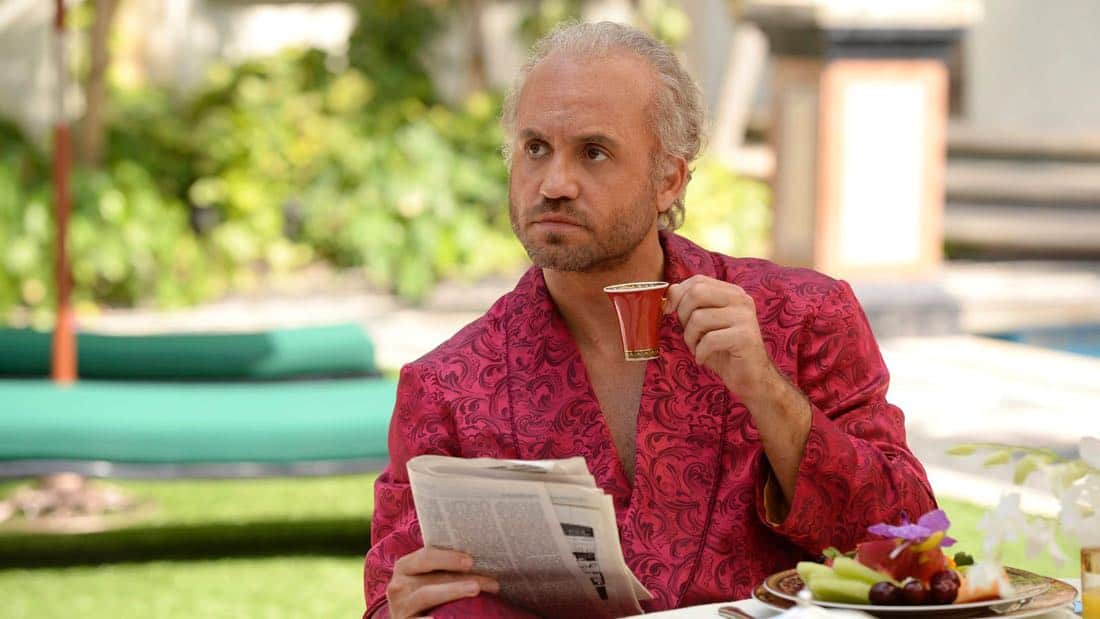 THE ASSASSINATION OF GIANNI VERSACE: AMERICAN CRIME STORY, the second season of the franchise, kicked off its run this week with episode one, “The Man Who Would Be Vogue.” Set in both 1990 and 1997, we see the eventual killer, Ander Cunanan, as he first encounters the legendary designer, as well as the murder and its aftermath. The mostly non-fiction story apparently seeks to examine the relationship between the two men, as well as the manhunt for Cunanan, and how Gianni’s sister, Donatella, steered the company following her brother’s death.

That’s a lot to cover, but it doesn’t seem like too much for nine hours of television, which is how many episodes this will run. By keeping the story focused to only four leads (the three above plus Versace’s long-time partner, Antonio D’Amico), it avoids the sprawling that some such dramas get into, and provides a cohesive narrative, even as the timeline jumps back and forth.

THE ASSASSINATION OF GIANNI VERSACE: AMERICAN CRIME STORY feels very Ryan Murphy. What I mean by that is, like other Murphy properties, there are strong, colorful characters, sometimes understated, at its center, the direction and design are artsy while remaining relatively grounded, and the pacing is slow but purposeful. There’s a certain tone and style that has become a Murphy hallmark, and even with most of his familiar band of recurring actors absent from this outing, his fingerprints are noticeable on the work.

As usual in a Murphy show, the casting is spot-on. He brings back Glee’s Darren Criss as Andrew Cunanan, who appears to be the lead character in the first episode. Criss is a talented man, and this role stretches him. Cunanan is a habitual liar, acting his way through life, and it’s hard to gauge his sincerity, even in the moments where he is alone. Criss balances this while still showing us why people would fall for Cunanan’s falsehoods and charm. It’s a complex and difficult performance, and Criss nails it.

The other leads are Edgar Ramirez (Gold) as Gianni Versace, singer Ricky Martin as Antonio D’Amico, and an almost unrecognizable Penelope Cruz (Vicky Cristina Barcelona) as Donatella Versace. Ramirez doesn’t have a whole lot of chance to show his skills yet, almost being set dressing in his own show, but Martin and Cruz prove themselves right away.

The setting itself is necessarily opulent. Versace did not live simply, as one might expect, given what he’s known for. And Miami Beach in the 1990s was not a boring place. This makes for a locale that looks almost Hollywood glitzy, but is true enough to the reality. It makes one think of the trappings of wealth and celebrity, and the murder itself shows how none of that protects anyone from the darkest parts of the human soul. I don’t mean this to sound overly metaphorical, because it’s not; it’s a grounded show.

The frequent back-and-forth time jumps aren’t my favorite way to tell a story, but are the right choice for THE ASSASSINATION OF GIANNI VERSACE: AMERICAN CRIME STORY. There’s really no other way to depict both the lead up and the aftermath without it feeling like two separate shows. By splitting it in this manner, it helps with overall cohesion.