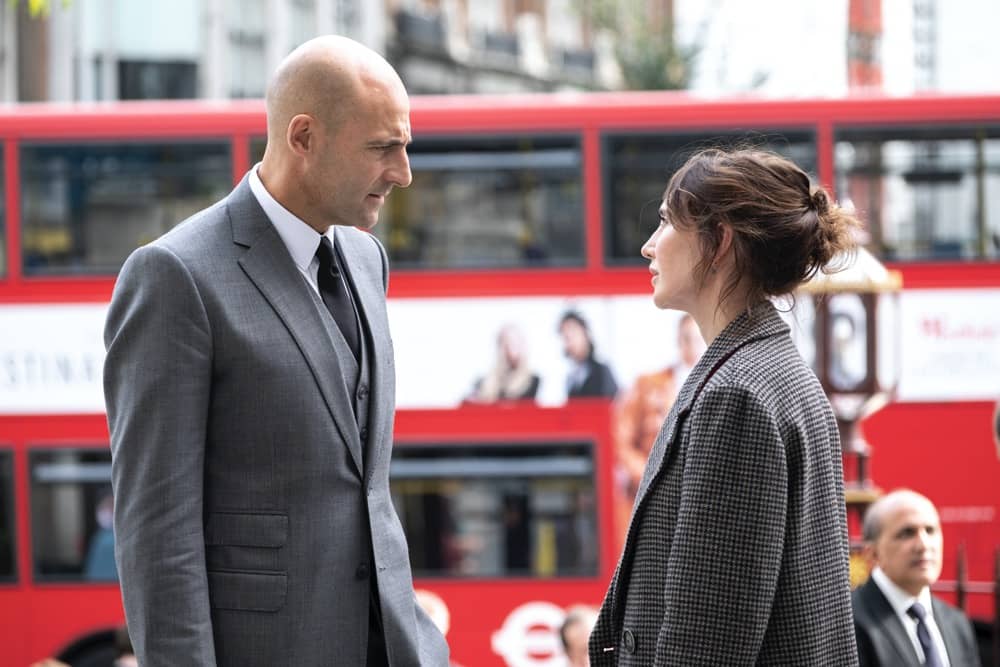 Spectrum Originals will soon present the drama series TEMPLE. The show centers around a doctor who creates a secret underground clinic to try to find a cure for his dying wife, and ends up treating criminals and others who don’t want to deal with the healthcare system. It’s a story steeped in mystery and told out of order, so it takes awhile (beyond the pilot) for it to become clear what is going on. And that mystery seems to be the point, as more time is spent wondering what has happened than enjoying what is happening, at least in the first couple of episodes.

Mark Strong (Low Winter Sun, Zero Dark Thirty) stars as Dr. Daniel Milton, and he’s a compelling lead. Obviously strong and masculine, he is able to handle the more emotional scenes with aplomb. He creates a fully realized, complex protagonist who is full of grief and love, and makes bad choices – some really bad – as a consequence. Daniel doesn’t seem certain where his line of morality is when questioned, and that is all part of the turmoil he’s portraying.

Strong is supported by a capable ensemble cast, including Daniel Mays (Good Omens) as Lee Simmons, his assistant on the project. I would really like to know why Lee is there, but that’s not made clear in the first two hours. The female characters are used a little less effectively, with Catherine McCormack’s (Lights Out) shown mostly in how her illness motivates her husband, Daniel, and Anna Willems (Carice van Houten, Game of Thrones) also relating almost exclusively to Daniel. To be clear, they seem like they’re individualistic women with careers and lives of their own outside of him, but that isn’t what TEMPLE is showing. Which sort of makes sense, given the story is Daniel’s, but is also regrettable to those who want to see more from them.

There’s also a subplot that adds action to the piece when a young father-to-be (Tobi King Bakare, Cursed) is shot during a bank robbery and brought to Daniel’s clinic for help. But I’m not sure what that has to do with anything else in TEMPLE, at least not yet.

Which honestly is the frustrating thing about TEMPLE. I like the characters, I like the production, I like the design. But I don’t know what’s going on. And unlike those supernatural mysteries, like Lost, that beg to be explored, the mysteries in this series don’t seem as deep. It’s more like information is withheld for shock factor, but not necessarily to make the story better. Though, I’ve only viewed two of eight episodes, so I can’t say for sure that the payoff isn’t worth it. It was renewed for a second series, so there may be a solid ending.

What is just as confusing is what Spectrum is doing with ‘Spectrum Originals.’ These are their exclusive shows just for Spectrum subscribers. But they only had one series last year, and now this, which is a British import, not truly an original. Sure, they control the only American access to it, but so what? It’s not like this is a huge hit people are clamoring to get at. New episodes of Mad About You are coming to the service later this year, and that might be a bigger draw. But it’s hard to see that and this being enough to actually drive anyone to subscribe to Spectrum.

So what we’re left with is a confusing show on a confusing service, and honestly, I don’t really think it’s worth looking into any further. Though if you already have Spectrum, it may be worth a watch for anyone who likes gritty British dramas.

TEMPLE premieres October 26th only on Spectrum (in the United States).