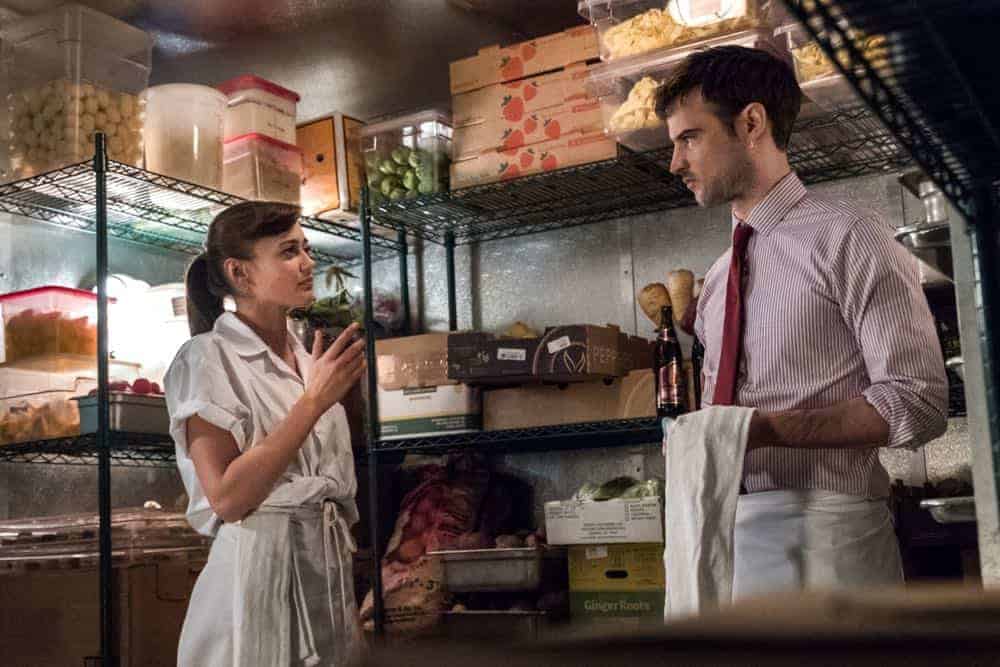 One of Starz’s newest half hour dramas is SWEETBITTER, based on the Stephanie Danler novel of the same name. In it, Tess slips away from her home to move to New York City with barely any money or possessions to her name. Finding a cheap flat, selling her car for rent money, she desperately looks for work until she lands at one of the best restaurants in the city as a waitress. But will she survive the demanding work and low pay in the service industry to find her dreams realized? And what exactly are those dreams?

SWEETBITTER doesn’t make clear what Tess (Ella Purnell, Miss Peregrine’s Home for Peculiar Children) wants or what she’s doing in the Big Apple in the first episode. Instead, it seems the audience is just expected to understand her passion, shared by so many who have come before her. Tess’s journey is so much a trope that, until one stops to really consider it, it’s easy to miss the most basic, all-important details about the protagonist are entirely missing. We’re not even really told or shown where she’s from. This is just the stereotypical young person fleeing to the big city plot, a classic coming of age in a fresh, exciting world for a fish out of water, that has been done so often.

That being said, SWEETBITTER isn’t terrible. The cast is filled with fine performers like Caitlin FitzGerald (Masters of Sex), Paul Sparks (House of Cards), Tom Sturridge (On the Road), and Evan Jonigkeit (X-Men: Days of Future Past). Sparks, in particular, stands out, always great at playing the observer in a busy situation. Here, he’s Howard, the boss in the restaurant, but he still listens more than he talks, exuding quiet authority. It’s an ensemble cast that works, and that’s why one may forget about the glaring omissions. For a little while, anyway.

What is more concerning is the question, does SWEETBITTER know where it wants to go? The entire first episode is just Tess looking for employment, meeting all the other characters, and working through her first shift in the restaurant. The majority of the running time is spent on the last item of that list. So while we can see the type of person she is in a particular situation, we’re not sure what she hopes to accomplish or why she came, which means it isn’t clear where the story is heading. If the writers know this, great, but eventually they’re going to have to start showing it.

Instead, the series seems more concerned with the journey, which is a valid choice, if there were only a little bit better established structure around it. Tess takes moments in the chaos to savor an exotic food or talk to an old lady, and that’s fine. Those are interesting moments. But they would be all the more poignant if we understood the context or what they mean to her, rather than just taking at face value that these things are helping her to grow. How? And towards what?

SWEETBITTER seems to be all style and tone, without the depth of substance to support it. It’s enjoyable, but superficial. Given that it is based on a novel, presumably there’s a story set to emerge. But what works in the written world, a slow set up, may not be as satisfying in the television industry, where the end is less defined and there’s less certainty of a payoff, even a less than satisfying one. Hopefully, the next few installments will fill in the gaps, essential if the series wants to attract much of an audience.