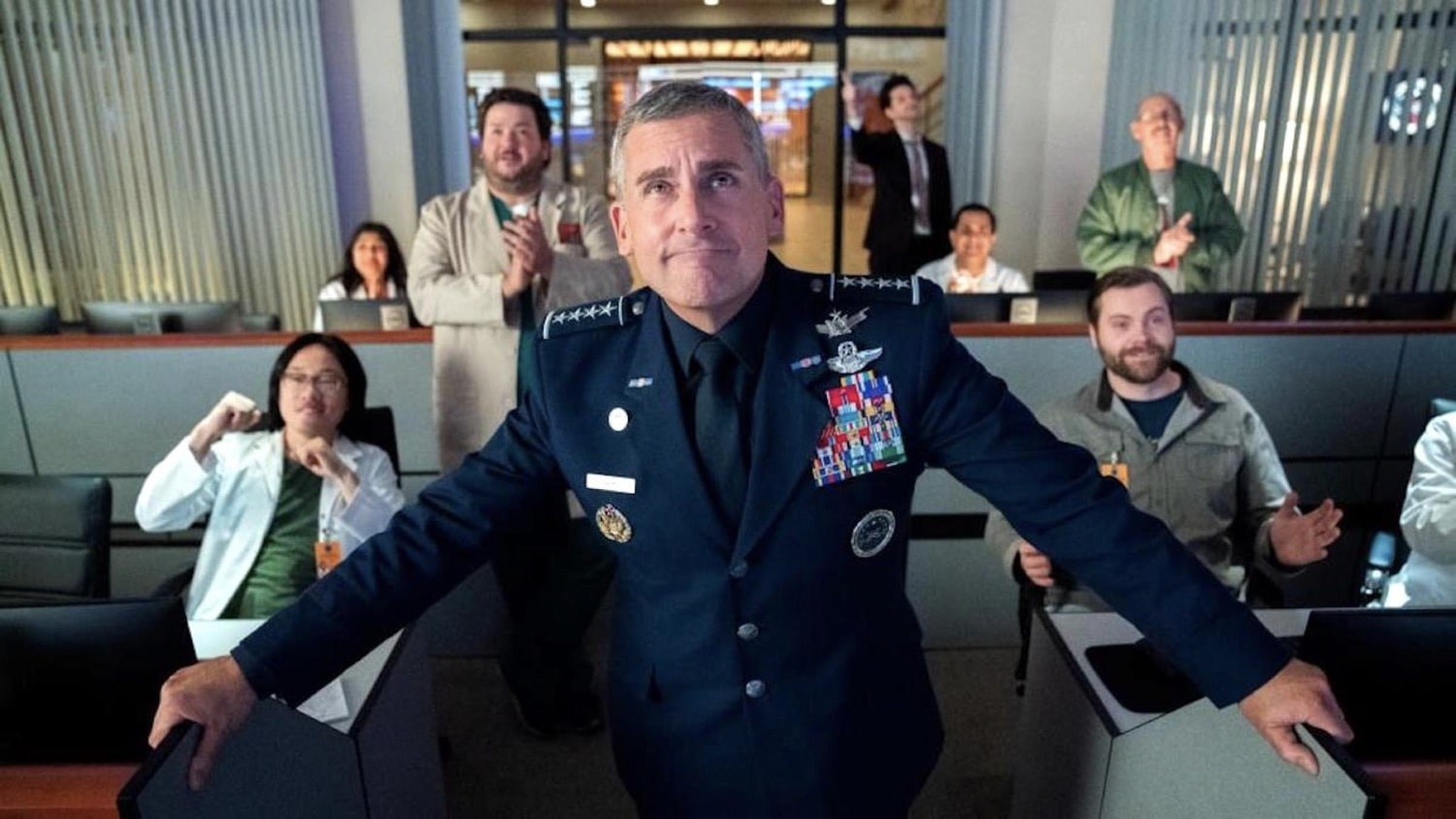 Greg Daniels, who adapted The Office for American audiences, has been busy, with new two shows hitting streaming services in as many months. One was Upload, which I reviewed back in mid-May, and the other is SPACE FORCE on Netflix. I’ve had the chance to watch all ten episodes, but will talk about the show mostly generally to avoid spoilers.

SPACE FORCE stars Steve Carell as the manager of a department, just like The Office, but this series isn’t nearly as funny as that one was, or even as amusing as Upload (despite sharing the delightful Owen Daniels in underrated roles). Though, I’m not convinced it’s meant to be. There are outrageous things that happen and eccentric characters. Yet, the tone the lead character sets for the piece and some of the events of it keep things more reigned in.

As the series begins, General Mark Naird (Carell) is promoted from the Air Force to lead the new branch of the military, Space Force. And while his fellow branch heads (Jane Lynch, Patrick Warburton, Noah Emmerich, and others) make fun of him for it, Naird takes the job seriously and does his best. He finds ways to work the scientists who have such different mindsets than he does, and struggles to be a good father to his daughter, Erin (Diana Silvers, Ma).

But it’s not easy. As mentioned, the generals rag on him endlessly, as does their boss, John Blandsmith (Dan Bakkedahl, Veep). Not to mention, the unnamed POTUS is likely the same one we have today, temperamental and petty, though with the events of this year out of the mix (for now, anyway). Mark’s assistant, Brad Gregory (Don Lake, Zootopia), may have saved his life once, but is woefully incompetent. The social media guru, F. Tony Scarapiducci (Ben Schwartz, Parks and Recreation), is more hindrance than help. And last, but far from least, Mark’s wife, Maggie (Lisa Kudrow, Friends, The Comeback), is in prison for the next 40-60 years for reasons not revealed to the audience in season one.

As mentioned, the SPACE FORCE base is comprised of scientists, who you might think are cold and unfeeling based on stereotypes. One could also say the same about military officers. Yet, while outward displays of affection are rare, possibly one of the elements that keeps this series low key, we see some very sweet moments. There’s great stuff between Mark and his daughter. There’s arguably even better stuff between Mark and the head scientist, Dr. Adrian Mallory (John Malkovich, Billions, Being John Malkovich). The two have a terrific bond that is often awkward, but really makes up the emotional core of the series. A secondary romance between Mallory’s second, Dr. Chan Kaifang (Jimmy O. Yang, Silicon Valley), and Captain Angela Ali (Tawny Newsome, Bajillion Dollar Propertie$) is also touching.

This human companionship, the scenes where characters connect, is SPACE FORCE’s redeeming quality. Amidst the chaos and the colossal screw ups and the infighting and competitiveness, there are people with hearts who are trying to do a great job. That provides an in for viewers to connect to, and with excellent acting, it’s easy to forget about how few times you’ve laughed out loud.

Which is not to say SPACE FORCE isn’t funny. It’s just more strange funny than obviously humorous. I wouldn’t call its style subtlety, necessarily, but it is a bit sneaky. It’s clever, but not overly so. More just bizarre, really.

Reviews for SPACE FORCE have been mixed, but honestly, I’m fully on board. The ensemble is terrific, the storytelling is interesting, and the acting as absolutely fantastic, as you would expect from this cast. Go in expecting The Office and you’ll be disappointed. But go in with an open mind and withhold judgment, and you may agree.

The only regret I really have is that Mark’s father, Fred (Fred Willard, Modern Family, Jimmy Kimmel Live), won’t be able to return for a second season, and will have to disappear off screen.

Other than that, and especially with the giant cliffhanger of an ending, I’m ready to re-enlist for another mission. SPACE FORCE’s first season is available now on Netflix.