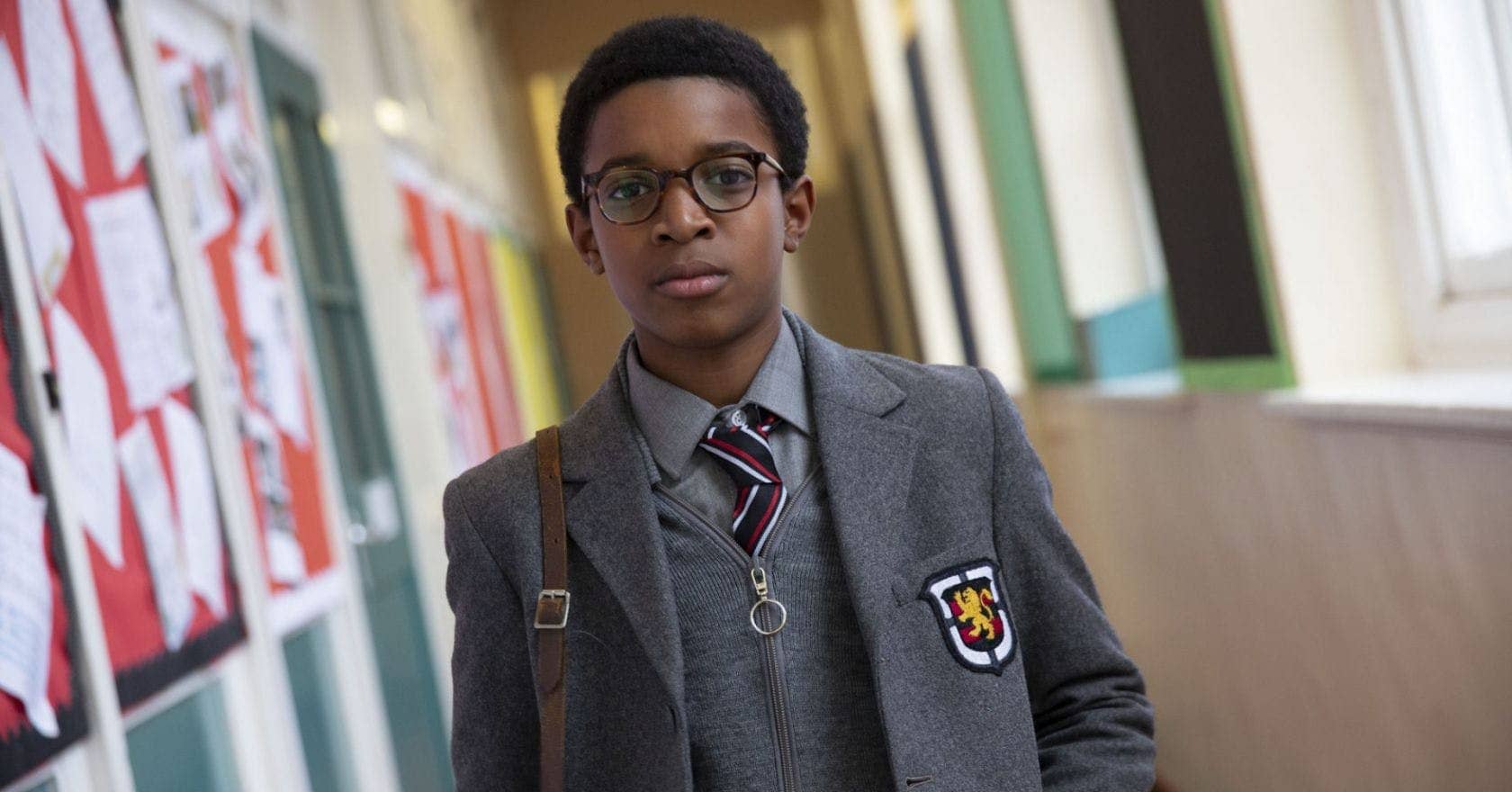 It is with no small amount of sadness that we reach the end of the five-film run of SMALL AXE. That is due in part to the fact that the final movie in the series, EDUCATION, is one of my favorite two of the group. (The other being the very first one.) As someone that worked in the field of education, I admit that I am extra susceptible to such stories. But I dare anyone to watch SMALL AXE EDUCATION and not be affected by the tale told.

Kingsley Smith (Kenyah Sandy, Jingle Jangle: A Christmas Journey) appears to be a normal twelve-year-old boy except for two things. One, he can’t read. Two, he is Black. You could easily argue the second item on that list is not abnormal, and I would whole-heartedly agree with you. But clearly the administrators in his place of learning do not. They don’t even seem to notice his illiteracy and push him out of the regular school and into a ‘special’ institution for ‘subnormal’ learners. They make excuses as to why Kingsley must be transferred, but it’s very clear to anyone paying attention this his skin color is the primary motivator, given his behavior is not any different than his peers.

Which is not to say that all the students at Kingsley’s new school are non-white. There’s a little girl (Tabitha Byron, Hetty Feather) that makes animals noises instead of talking, and perhaps she does need some assistance outside of a regular classroom, though certainly not what this place is offering. And Kingsley isn’t helped by the move, either. No kid is, as if a teacher supervises their room at all, he’s playing on his guitar instead of providing instruction. This is a bad place that benefits no one.

Lest you think Kingsley does belong in a special education class due to his lack of reading skills (and setting aside any judgment, positive or negative, on special education), SMALL AXE EDUCATION follows Kingsley’s story long enough to show that a little attention, encouragement, and motivation are enough to have him catching up in no time. This is a regular kid who fell through the cracks, the normal failings of educators to him exacerbated by bigotry and ignorance. He belongs in a regular classroom in a public school.

I’m a believer that every child deserves to have a teacher who can help them learn, and every child can learn. So SMALL EDUCATION breaks my heart before providing a far-from-perfect, but very touching, balm. There is a happy ending, of a sort.

The performances in SMALL AXE EDUCATION are great, as one would expect from this series. Sandy is absolutely terrific in the lead role, and I hope he has a long acting career ahead of him. I was also deeply moved by Sharlene Whyte (The Story of Tracy Beaker) who plays Kingsley’s mother, Agnes. At first, Agnes is one of those failing Kingsley. But she does care very deeply for her son, learns her lesson, and becomes not just an advocate, but a devotee who sees Kingsley for what he is, eventually. It’s her face at the end that brings me to tears as much the story itself.

As has been the case in every installment of SMALL AXE, the production is terrific, directing is solid, and sets and costumes are period-authentic in a non-distracting way. This is a fine entry, and ends the run on a very high note, making me miss SMALL AXE already. I really hope it comes back for a second season.

SMALL AXE EDUCATION and the other four films by Steven McQueen are available now on Amazon Prime.