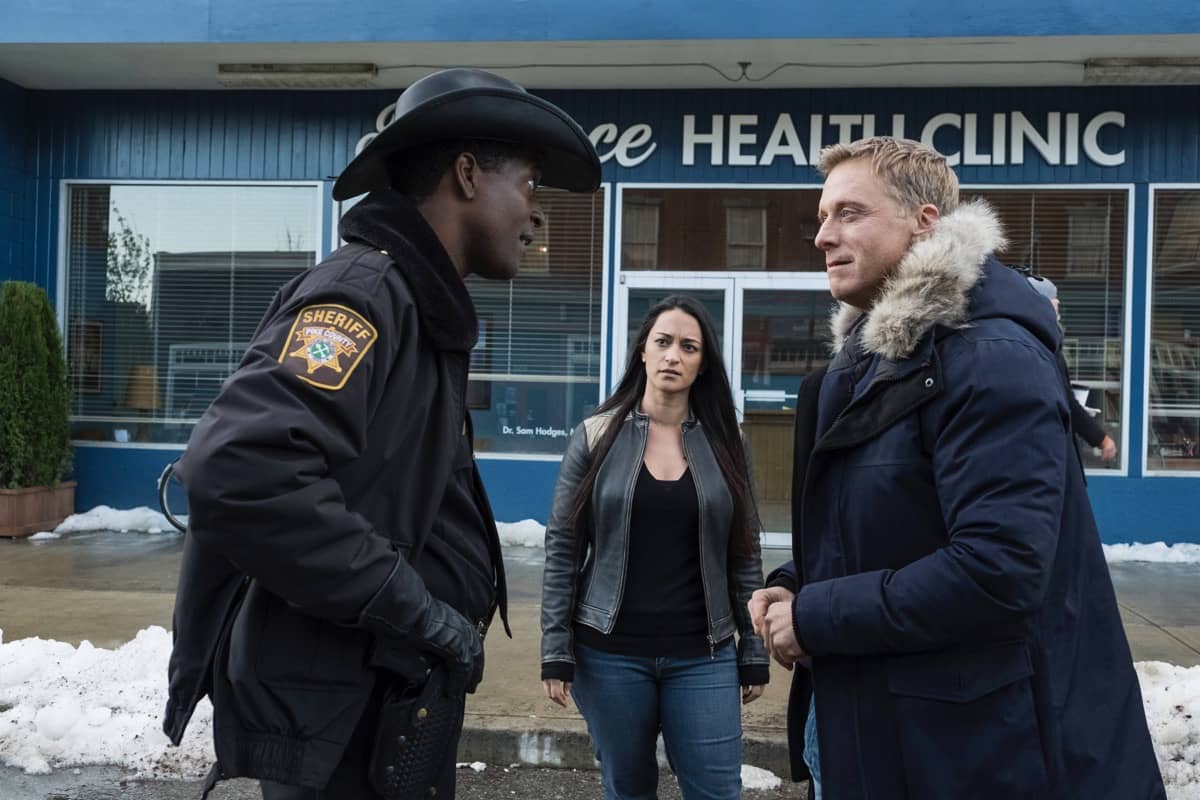 SyFy’s latest dramedy is RESIDENT ALIEN. Based on the comics of the same name, the series follows an extraterrestrial that crash-lands on Earth and has to fit in among the local population. He tries to stay apart initially, taking the identity of a doctor who lives in a remote cabin in Colorado near the crash site. But when the town’s local physician dies and no one else can get through the roads at this time of year, the mayor pulls “the doctor” out of retirement and forces him to fill in. Toss in a murder mystery, possible romance, a child nemesis, and a planned genocide, and there’s a lot going on.

Alan Tudyk stars in RESIDENT ALIEN as Harry Vanderspeigle, the human appearance of the alien (once the real man is killed). Tudyk has a long resume full of lots of voice-over work (Rogue One, Harley Quinn), as well as both comedic and dramatic turns in the series Firefly and its film spin-off, Serenity, so he’s already proven his bona fides and is overdue for a starring role. He mixes just the right amount of levity to a very dark story, and his humor is beautifully downplayed. Tudyk finds plenty of good moments for subtle acting, both physical and emotional, and is highly believable in a very strange part.

Harry, as I’ll refer to the alien from here, was on a mission to wipe out mankind when he crashes. It’s evident from the pilot that, living among the species, he’ll grow to have affection for humans, and likely protect them. Despite a couple of heinous acts, it’s still easy to root for Harry – as long as he is able to be stopped from murdering young Max (Judah Prehn, Kinderwood), the only one who can see his true form. I just don’t see how Harry could come back from killing a kid.

It would be very easy for Harry to fall into stereotypes, but so far RESIDENT ALIEN deftly avoids them. Harry is neither heartless nor full of emotion. He is intelligent, yet socially awkward, but neither to the point where it defines him or distracts from the story. He isn’t easy to pin down, and this complexity makes the character work in a way he very easily might not.

The supporting cast of working, but mostly not yet household name, actors are excellent, too, finding the absurdity of individualism and small-town life, making the most awkward group of delightful individuals this side of Stars Hollow. Sherry Mike Thompson (Corey Reynolds, The Closer) is a tough guy who’d like to be referred to as Big Black. His deputy, Liv Baker (Elizabeth Bowen, Upload), is awkward and open-minded. The two share a touching sing-along moment in the RESIDENT ALIEN pilot. D’arcy (Alice Wetterlund, Silicon Valley) stands out as the fun bartender. Mayor Ben Hawthorne (Levi Fiehler, The Fosters) is a liberal in a conservative town. And the second lead of the show, Astra Twelvetrees (Sara Tomko, Once Upon a Time), is a loner who finds the hidden kindness in Harry. Or maybe she just needs someone and he’s there.

I like that RESIDENT ALIEN has a sizeable ensemble cast. I like that it has a distinctive look that works for it. I like the mystery of the doctor’s murder that extends beyond the first episode. I like a lot of things about this show, including that I can’t adequately describe it one sentence. Mostly, I like that it’s a fully realized world, and despite some coincidences that stretch believability, it’s a well-thought-out story of complicated people, and one alien, that stands apart in its lack of cheesiness that often suffuses similar premises. It probably helps that its not a sitcom.