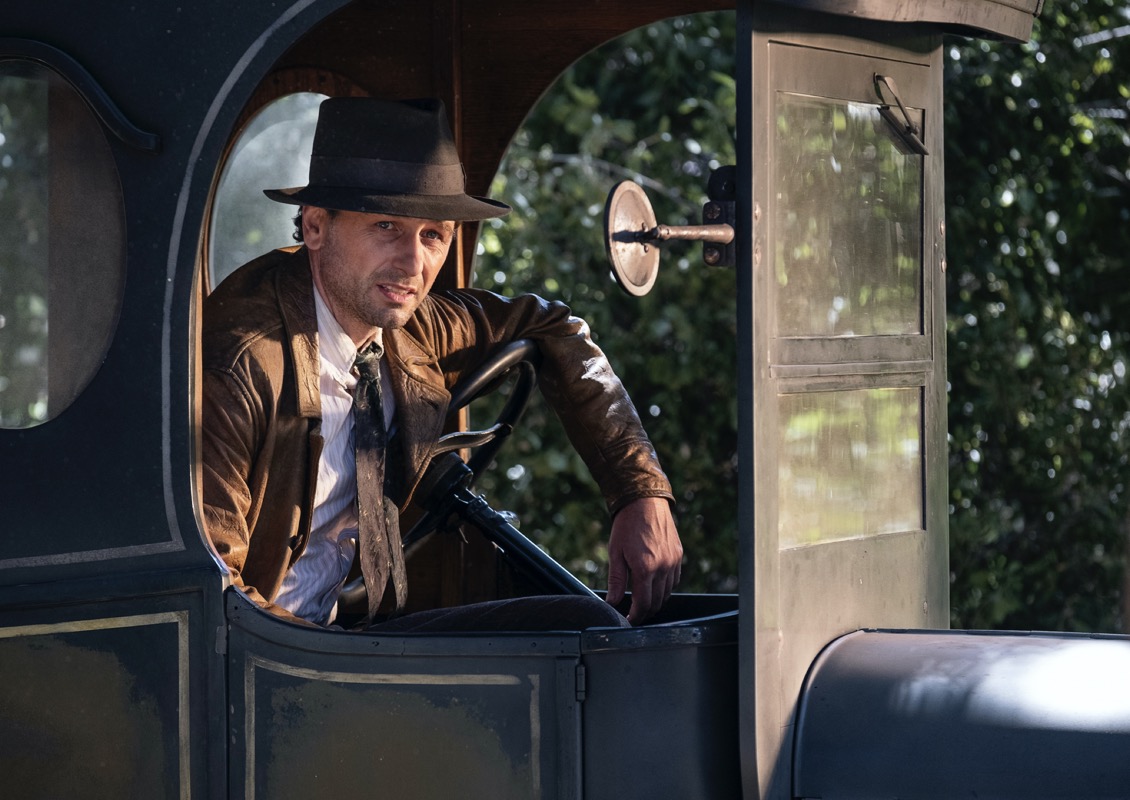 HBO brought back a beloved character of literature, radio, and television this week with their new PERRY MASON show. This is a prequel story, set before the titular man becomes the defense attorney he’s been portrayed as in the past. Set in Los Angeles 1932 during the Great Depression, Perry is a noir private eye working for a lawyer and taking care of his family farm, which he should probably unload, given it boasts a mere two milk cows and is at an airport. How does the drunk absentee lawyer become a hero in the court room? Keep watching to find out.

Matthew Rhys (The Americans) stars as Perry Mason. Rhys is an extremely talented actor, as many already know. His performance in this is as impressive as it customary for him. There’s plenty to sink his teeth into for this role, as Perry is deeply troubled, mostly legitimately. His entire past isn’t revealed right away, so there are still some unanswered questions, such as why did he leave the military dishonorably? But the things we can see make him as sympathetic as he is tortured, so substantially.

Rhys is surrounded by other fine performers. John Lithgow (The Crown) is a lawyer Perry is working for named Elias Bichard Jonathan. Juliet Rylance (The Knick) is Jonathan’s more-than-capable assistant, Della Street. Shea Whigham (Boardwalk Empire) is Pete Strickland, Perry’s co-hort. Tatiana Maslany (Orphan Black) doesn’t show up in the premiere, but is playing a religious leader named Sister Alice that promises to be compelling. Chis Chalk (Gotham) is similarly absent from the pilot, but will be a good cop among the bad. Plus, Nate Corddry (Mom), Robert Patrick (Terminator 2), Eric Lange (Lost), and a slew of less recognizable, but no less skilled, actors join them in smaller roles.

The design, costumes, and sets are no less impressive. Every item of clothing, prop, and vehicle is beautifully recreated and sets the scene brilliantly, though we should expect no less from a big budget production like PERRY MASON. In particular in the pilot, the original Angels Flight train is recreated in its previous location. This is noir, but realistic looking noir.

As good as everything looks, a lot of the characters are total scum of the Earth. The cops we see are like a gang, more interested in lining their pockets than protecting and serving. The Hollywood execs aren’t any better, trash looking after trash with violence and threats. There are good people in this world, like Perry Mason, and they can even thrive without doing too many bad things. But they do have to exist in the muck alongside the worst of humanity, and that informs their characters, making the whole piece rather depressing.

This is where fans of the old PERRY MASON may have an issue with the new version. The old Perry was a shining beacon, while this one isn’t separate from the baddies. They are often the people he works with and for.

The biggest obstacle, though, might be just how disturbing some of the visuals can be. I’m no stranger to violence and gore, and who can be in today’s prestige television landscape? But PERRY MASON finds new depths in a single hour. A dead baby, rendered in stomach-churning detail, is only briefly on screen, and yet it feels like too long. I won’t go into anything further, but if child violence is a trigger for you, steer clear of this show. And even if it isn’t, it’s extremely hard not to be affected by its portrayal here.

Is the world ready for a gritty PERRY MASON? Will subsequent seasons grow him into someone a bit cleaner, or is this destined to be a one-off miniseries experiment? Either way, it’s a very well-made, well-acted series, and unless they do worse than the baby, I’ll be tuning in to see how it turns out.