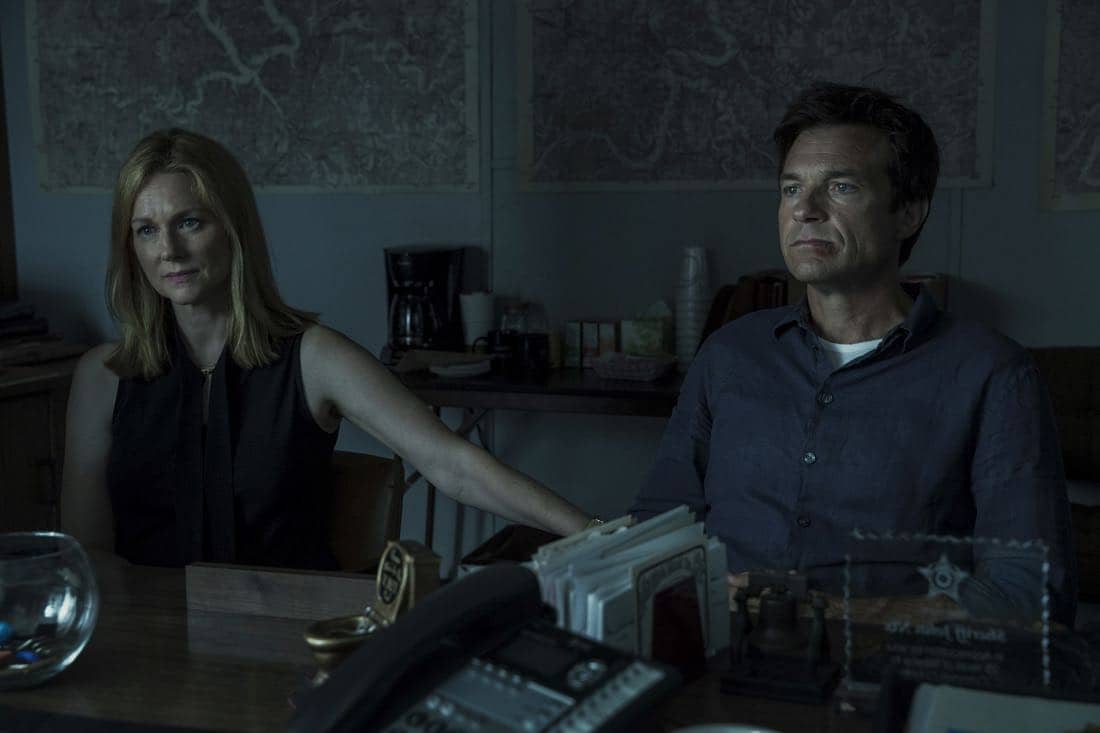 Netflix’s newest series, OZARK, is a prime example of a streaming series that takes more than one episode to make a true pilot. The first hour sets up the lead character, Marty Byrde (Jason Bateman, who is also producing the series and directing four episodes), who the man is and the situation that drives him to desperation. But it won’t be until subsequent installments for viewers to get to know much of the rest of the cast and plot threads.

As OZARK begins, Marty has just found out that his wife, Wendy (Laura Linney, The Big C), is cheating on him. Before he decides what to do about it, his blowhard business partner, Bruce (Josh Randall, Quarry), is caught skimming money by the drug kingpin they launder for, Del (Esai Morales, Caprica). Del wants revenge, but Marty thinks fast, saying Chicago is too hot to keep working in, and proposes a move to the Ozarks instead. Del accepts Marty’s offer, albeit on a sort of probation. So Marty packs up his family and moves, which is when much of the ongoing story will probably begin.

Despite realizing that much of what unfolds over episode one is just set up, I found it a compelling, intense hour of drama. Given that this is a streaming series, and that I did not check cast list nor press release prior to viewing, the installment contained many surprises, and I wasn’t quite sure what would happen. Even a couple of familiar faces don’t survive the initial offering, and so one can’t take for granted who the players of the show are, or how things are going to shake out.

While Netflix made more than one episode available, I wanted to write this review before watching further. Knowledge colors perspective and what would be said, and on a show like OZAK, I feel the fewer spoilers, the better. If the other nine hours can come even close to reaching the stress-inducing pace of the first, this will be a show people will binge and talk about. I’d like to preserve the specialness of that status, as I am hooked by the premiere.

Bateman and Linney are great, of course. Linney is easy to hate right off the bat, and the ‘twists’ she is part of, while predictable, are also necessary to get things rolling. I assume there will be more to her. Bateman, on the other hand, seems like such a good guy, the put-upon hero, that it’s hard to match that up with the illegal activities we find out he’s been engaging in for some time. Unless his quietness is guilt. OZARK doesn’t treat Marty as an antihero or a shady character, not at first anyway, but we know he absolutely is. Which is a testament to what Bateman can do with a role.

OZARK will be the kind of show to make you question not only your own life choices, but wonder about the friends and family you think you know. Who’s really out to make a quick buck, and what moral lines will they cross (or not cross)? Who can you trust, and at the end of the day, is everyone really just selfish? Can love motivate people to set aside their own self-interests? These are just some of the musings I’ve had after watching the first episode.

One of the creators, Bill Dubuque, is the writer behind The Judge, The Accountant, and A Family Man. The other, Mark Williams, produced two of those films. Which should tell you the tone and type of plot to expect from OZARK. I certainly feel it right away, and am excited to see a premise like this played out over seasons, rather than a mere two hours. OZARK is not entirely different than other series running right now, but has a specific take that makes it worthy.