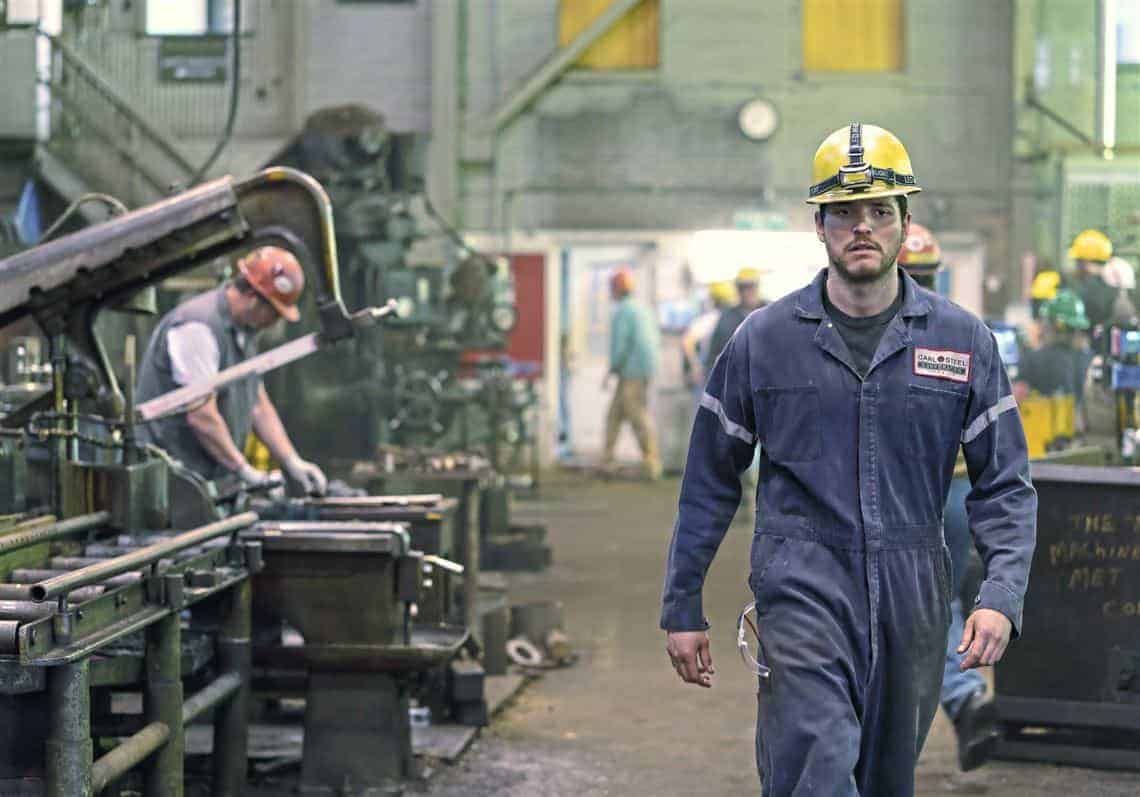 CBS All Access, that extremely-overpriced streaming service with scant offerings, is very slowly adding to their catalogue. The newest drama to hit the service is ONE DOLLAR. The conceit is there is a dollar bill that changes hands between multiple characters, several people sharing ownership in the first hour alone. This happens in a small town, and not too far along in the pilot, a mysterious mass murder occurs there, too. Supposedly, this dollar bill will connect the strangers, but its not immediately apparent how.

The lead in the first hour seems to be Philip Ettinger, who plays Garrett Drimmer (Compliance). Garrett is a single father who is barely scraping by on his income from the local steel mill. He falls behind on his childcare payments, but suddenly becomes flush. Why? Well, one theory might be that he’s the murderer, but that seems way too obvious to be true. So that remains unrevealed for now.

ONE DOLLAR boasts a large ensemble cast, and given how far down the list Philip is on the official site, it seems the focus may jump around a bit. Other central figures in episode one include: Bud Carl (John Carroll Lynch, American Horror Story), the millowner; Wilson Furlbee (Greg Germann, Once Upon a Time), a developer; Dannie Furlbee (Kirrilee Berger, K.C. Undercover), Wilson’s daughter who will soon be off to college; and Jake Noveer (Nathaniel Martello-White, Collateral), a private investigator. The CBS site shows nine other main players, including Scandal’s Jeff Perry, so the story is likely to be winding.

The production has done a great job going for the gritty realism of a small town. A lot about it is authentic, and the direction plays well. Despite some obvious fake outs, the mystery is interesting and the story is intriguing. A number of talented, familiar faces mix well with the lesser-knowns. My overall impression of the drama is that I want to see more, and was disappointed that CBS All Access is only releasing installments weekly, on Thursdays, instead of all at once, so I could only see a single episode. That makes sense for a streamer with close connections to a broadcast network.

Something that makes ONE DOLLAR superior to other programs I’ve watched on All Access is that it isn’t beholden to the forty-two minute running time that most broadcast shows are. Whether that’s because CBS still hopes to cut Star Trek: Discovery and The Good Fight for regular broadcast at some point (minus a bit of language) and this show just wouldn’t work on the basic airwaves, or for some other reason, it’s not clear. But ONE DOLLAR is a well-developed, non-procedural that fits well with the All Access brand and is better than most (if not all) of what airs on the parent network.

So my only real complaint is how inaccessible the series is. By hiding it behind a pay wall most people won’t be interested in buying access to, few will see it. Unlike the two sister programs mentioned above, this one doesn’t already have a built-in audience, and I’m not sure those subscribing for The Good Fight or Star Trek will be that interested in this. I mean, I am, but I’m a reviewer who samples a wide variety of shows, and some people have more narrow tastes. Hopefully those who already subscribe will sample it, as I think it’s worth watching. I just wish CBS wouldn’t make such a bad service model.

Oh, and the title ONE DOLLAR and the thing with the dollar bill? So far, it doesn’t make much sense. Only time will tell if it pays off or not. Still, even if it doesn’t, I don’t think it’ll matter much to the quality of the show, which seems high.

ONE DOLLAR releases new episodes every Thursday, and is available exclusively on CBS All Access.