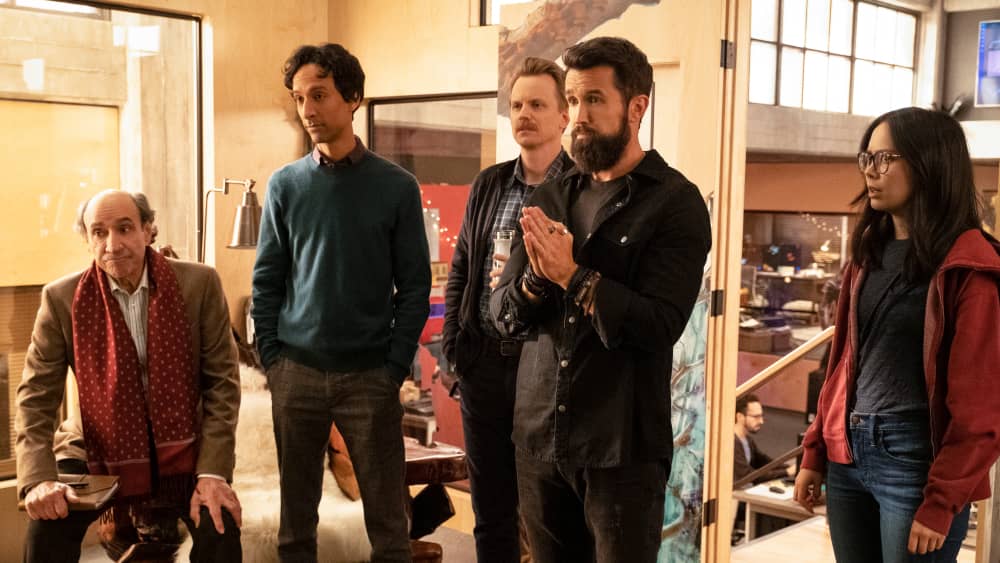 A new sitcom on AppleTV+ is MYTHIC QUEST: RAVEN’S BANQUET. Set at a video game developer whose sole product seems to be the titular Mythic Quest, the team releases the first expansion in the pilot, subtitled Raven’s Banquet. But the show isn’t about the game; not really. It’s about the various personalities who work there. Many represent archetypes, but there’s also a lived-in, complex element to nearly every lead that should not only serve to help people better understand one another, but also shine a spotlight on those who are too quick too judge. Also, it’s hilarious.

The creative genius behind the in-show MYSTIC QUEST is Ian (Rob McElhenney, It’s Always Sunny in Philadelphia). He hides in his massive, above-everyone-else office, and manipulates (purposefully?) them into doing what he wants. This is very frustrating to Poppy (Charlotte Nicdao, Kuu Kuu Harajuku), the actual coder who builds the game for him, and who wants to put her own thumbprint on it. David (David Hornsby, Good Girls) is the ineffectual boss caught in the middle of this struggle, and who surprisingly doesn’t always side with Ian. This feels like it may be the central conflict of the show, and is a delight right off the bat, with Ian and Poppy’s division not nearly as clear cut as it at first seems.

They are surrounded by a bevy of other colorful characters. Jo (Jessie Ennis, Better Call Saul) is David’s new assistant who worships and enables Ian. Tester Rachel (Ashly Burch, OK K.O.! Let’s Be Heroes) has a massive crush on fellow tester Dana (Imani Hakim, Everybody Hates Chris), who is fully committed and focused on the job. Brad (Danny Pudi, Community) may just be evil. HR Carol (Naomi Ekperigin, Broad City writer) wishes everyone would stop treating her like a therapist. Pootie Shoe (Elisha Henig, The Sinner) is the obnoxious child reviewer who decides if the game lives or dies. And the great F. Murray Abraham, The Grand Budapest Hotel, Amadeus) is CW Longbottom, the alcoholic, eccentric writer behind the game.

Not all of these actors in MYTHIC QUEST: RAVEN’S BANQUET are well-known, but it is an extremely solid ensemble. Each brings something great to the plate, and none feels in over their heads. They embody the douchebag, the naïve young adult, the frustrated bureaucrat, and so many others who actually work at places like this – or any workplace, anywhere. It’s a different set of personalities than The Office or Silicon Valley, but it’s still highly relatable, especially in how each individual has rich, inner lives. Whether they be enthusiastic dreamers or cynical paycheck collectors, they know how they fit into the overall picture, and do a great job showing the audience that.

It’s also just a solid win in the humor department. Much of the pilot is spent arguing over a shovel. Is a plain shovel too boring? Or does it transform the way gamers will interact with the world in an exciting new bend? Should it be flashy? Should it have dual purpose as a weapon? You can extend all of these questions into metaphor for so much else about our culture. But you will also chuckle as Ian struggles to smash a watermelon just the right way, or Brad finds a way to make it sexual. You’ll relate to Poppy’s pure love and devotion to it. I could write a whole review about the damn thing, and that’s just one element of episode one.

I love MYTHIC QUEST: RAVEN’S BANUQET. It’s magnetic, entertaining, and not just banal triviality. It’s that rare show that feels like it could just be dumb humor, but ends up being so much more. It should appear to viewers of all types.