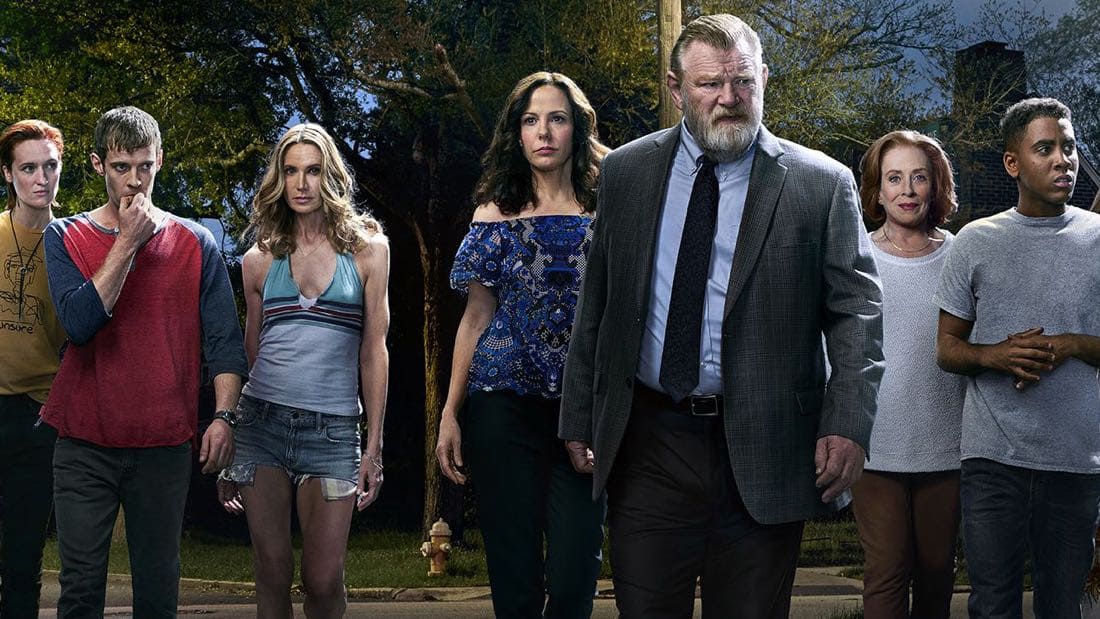 Coming to AUDIENCE Network, AT&T presents MR. MERCEDES. You might already know this is the title of a book by Stephen King, the first of a trilogy, in fact. But if you don’t know what it’s about, I’ll tell you. Detective Bill Hodges, recently retired, cannot let go of a serial killer case he never solved. Though, admittedly, it’s probably harder to let go when the murderer is stalking and taunting you, as is happening to poor Bill. Thus begins our cat and mouse game.

I went in cold, knowing nothing about this show, and that was apparently a mistake. The opening sequence is interesting, introducing a couple of sympathetic, engaging characters, and it’s easy to get drawn into their story. Except, their story is short-lived because of a horrific event, one of the most disturbing things I’ve ever seen on television, and it makes it very hard to get back into the series as we move past the beginning.

Get drawn back in, you will, though. Brendan Gleeson (Braveheart, Edge of Tomorrow) is terrific as Bill, a grumpy old man who want the kids (‘ tennis balls) to stay off his lawn. The source material is well reviewed, and the great David E. Kelley (The Practice, Boston Legal) serves as showrunner and frequent writer. The supporting cast is, across-the-board, fantastic, the direction is great, the pacing is swell, and the villain gets quite a bit of screen-time, too. So it’s nearly impossible, if you don’t turn the show off five minutes in, to not want to watch more.

Does this mean the beginning was a mistake? No, not exactly. Yes, MR. MERCEDES did not have to make us care about its victims right off the bat, nor make the attack itself so damn gory. However, I think by doing it the way the show does, it effectively communicates the brutality of this killer, the randomness of his targets, the danger present, and the stakes of the tale. So as much as I did not like what happened and have no desire to see it again, I can’t be upset at the choices the series makes for pure quality of storytelling. It’s not gratuitous, it’s purposeful, and that’s the bar by which I measure whether violence is acceptable.

The heart of the piece is the contest between Bill and Brady Hartsfield (Harry Treadaway, Penny Dreadful). Both men are explored pretty in-depth, Bill through his interactions with neighbor Ida (Holland Taylor, The Practice), lawn mower Jerome (Jharrel Jerome, Moonlight), and former partner Dixon (Scott Lawrence, JAG), and Brady’s with his mother Deborah (Kelly Lynch, Magic City), coworker Lou (Breeda Wool, UnREAL), and boss Robi (Robert Stanton, Jason Bourne). Each of these supporting players makes an impression with how they interact with the leads, but also stand out themselves as well-developed individuals, which is quite a feat for an hour-long pilot. Somehow they simultaneously exist as the stars of their own worlds, and support that central dynamic.

And we haven’t even gotten to the introduction of Janey, another lead not in the pilot, played by the always-magnetic Mary-Louise Parker (Weeds).

Sadly, Anton Yelchin (Star Trek) was slated to play Brady before he died. I could totally see him in that role, and I think he would have been great. But Treadaway is a fine replacement, and I don’t think anyone will remember that he wasn’t first choice. Ditto Taylor as Ida, as Ann-Margaret previously had that role before illness forced her to step aside.

King’s adaptations are hit or miss, and usually have what I think of as a very specific, not super high quality, tone. But like the best screen work that’s come from him, like Kubrick’s The Shining, MR. MERCEDES doesn’t feel like it fits that mold. Instead, it’s an intense psychological drama that stands apart as its own thing. I think this could be a really strong series to watch, though unfortunately it’s not on a network most people get, viewership confined only to DirecTV and AT&T U-verse subscribers. I wish it had broader reach.