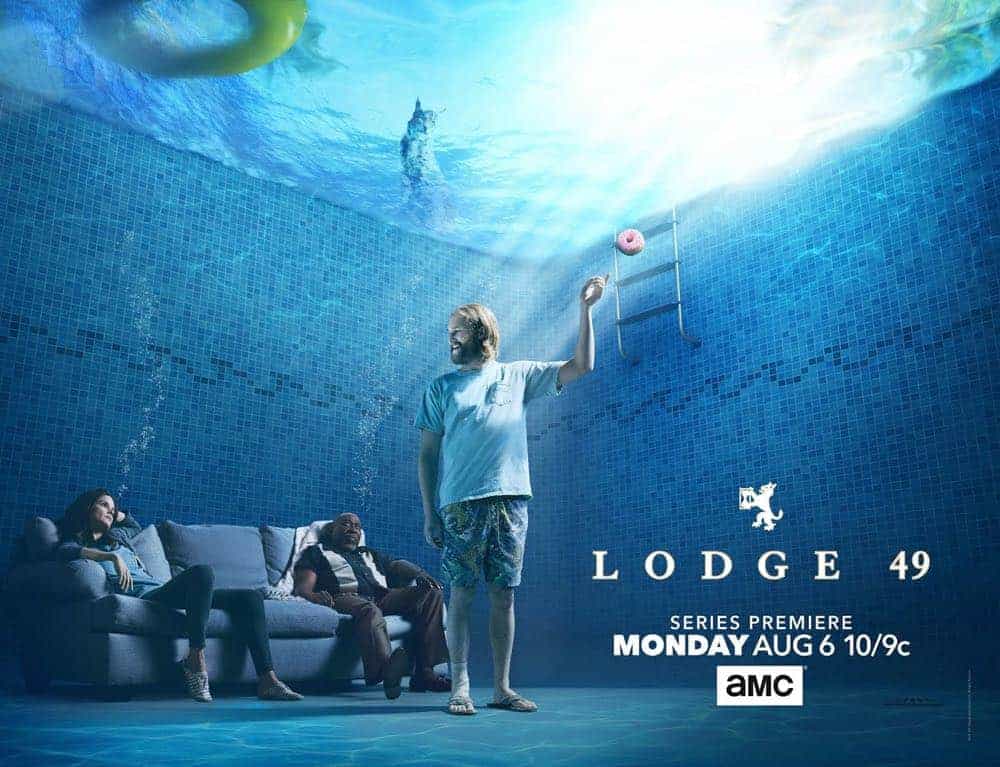 AMC’s newest drama is LODGE 49. Set in a sleepy, eclectic beach town, the show follows several main characters who belong to the titular lodge or are connected to someone that does. The meandering, slow-paced series promises mystery and quirkiness, but takes a long time getting to either. It’s well acted and well directed, but like its leads, also seems to be a little lost.

The primary characters in LODGE 49 seem to be Dud (Wyatt Russell, 22 Jump Street) and Ernie (Brent Jennings, Moneyball), with everyone else, at least initially, revolving around them. Dud is an unemployed surfer dude who can’t surf (because of a lingering injury) who is having trouble clawing his way out of debt and recovering emotionally from his father’s death. Thankfully, his twin sister, Liz (Sonya Cassidy, Humans) seems willing to help.

Ernie also struggles financially, but at least he has steady employment. Well, as steady as working on commission can be. But he’s been around and he knows the players, so as long as he can stay away from gambling, he does OK. Even if the woman he loves, Connie (Linda Emond, Law & Order: SVU), won’t leave her husband, content with just hooking up.

It’s also worth mentioning Blaise (David Pasquesi, Veep), a medical marijuana salesman who bartends at the lodge. Blaise doesn’t necessarily drive the story forward, but is an interesting personality who thankfully has a decent amount of screen time.

Things really get started when Dud finds a ring that leads him to Lodge 49. The place feels familiar to him, and he takes it as a sign that he must get involved. Since membership is loose and easy, Dud has no problem joining Ernie, Connie, Blaise, and others at the hang out. Where it will go from there is anyone’s guess, but there does seem to be an emphasis on the mystical and philosophy, and indications that the lodge might have some secrets to be uncovered.

I like LODGE 49. It’s hard not to. The characters can be frustrating, and are certainly often in frustrating situations themselves, but they’re not bad people. Viewers will want to see them succeed. Some of their problems are relatable and far from easy to solve. Thankfully, it doesn’t seem like the show will gloss over those and make salvation easy. There’s a little bit of a hyperreality to the piece that is pleasant. And Dud is basically The Dude, so it’s hard to go wrong there. The cast, while not well known, look familiar and deliver strong performances across the board.

Where I hesitate is the slow pace and lack of revelation. It’s fine to have a mystery, great even, but it needs to be clear things are going somewhere and clues need to keep coming to light. In the first hour, we do get some of Dud’s backstory, which comes later than is ideal, but is still soon enough to be informative. However, the lodge itself is teased out so agonizingly slowly, it just doesn’t look like the audience will get much of anything out of it until late in, not just the season, but the series. To move too quickly could fundamentally change the premise if the twist is big enough, but the longer it’s drawn out, the bigger it needs to be. If it takes too long, it will be extremely hard to get right.

It used to be, quality shows were few and far between on television, so audiences were willing to wait on a series like this and see what the pay off will be. Now, with a huge number of programs competing for attention, and having been burned by shows that teased but didn’t deliver, LODGE 49 seems likely to go into the ‘I’ll get around to it’ pile that most likely won’t actually get around to. Unfortunate, because there is potential here, it just needs to be shown more quickly and more fully.