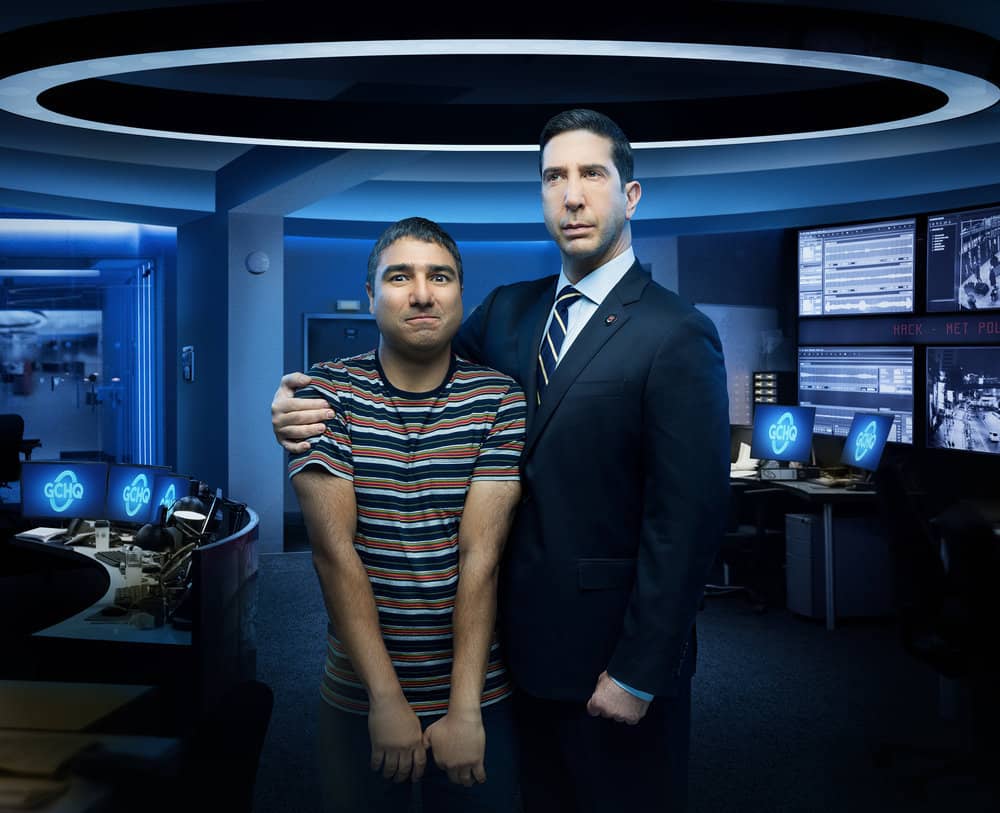 The first thing that strikes me is that INTELLIGENCE feels tonally similar to Netflix’s Space Force. There are very amusing bits and a great cast that is totally committing, but the show isn’t all that funny on its face. Which doesn’t mean it couldn’t be hilarious; all the key ingredients are there. It just isn’t yet, going through some weird, awkward humor that doesn’t quite land.

The Steve Carell of INTELLIGENCE is NSA agent Jerry Bernstein (David Schwimmer, Friends). Jerry clearly was not appreciated nor accomplished in the United States, despite what he says. But he’s exotic enough to the English that many seem to hold him up quite high, and he leans into that, pretending to be the hero. Unlike Carell’s Space Force commander, Jerry isn’t actually in charge. He also lacks the heart, caring about boosting his own profile, rather than helping others succeed, determined to be looked up to in this new environment where no one actually knows him.

The true boss of the office is Chris Clark (Sylvestra Le Touzel, The Crown), a no-nonsense leader whose underlings rarely meet her expectations. It feels quite strange that someone as put together as Chris has allowed this team of misfits to flourish while bucking her authority and seeming inept at almost all times. One has to wonder if she has no control over office staffing. Or perhaps this team is very effective and the audience just hasn’t seen it yet. Either way, Jerry clashes with Chris, even though Chris is bending over backwards to be accommodatingy, while stopping short of letting him run all over her.

The rest of the department (besides extras) is made up of fanboy Joseph Harries (Nick Mohammed, The Martian), cool hacker Tuva Olsen (Gana Bayarsaikhan, Wonder Woman), airhead secretary Evelyn (Eliot Salt, Normal People), and clueless mess Mary (Jane Stanness, Sally4Ever). All four seem to be some sort of stereotype. Mary looks like she could be Professor Trelawney’s sister. Only Tuva acts like she can accomplish things, but her role in the pilot is mainly to be hit on by Jerry. Hopefully, she won’t sleep with him. But given the type of show INTELLIGENCE is, it seems likely she will.

The office itself is much more The Office than Alias or any other spy show. It would be at home in a business park, mostly anyway. While there is great-looking technology, there’s also stained, threadbare carpet and dull walls. The HR department takes a week to even issue a pass, and the lobby is less than impressive. There’s a bureaucratic drabness that works well and takes away from the high tech setting one might expect in a delightful way.

Now, I’ve only seen the first of six episodes as I write this, but if the other five are anything like the pilot, we’re in for a season that has a few authentic, earned laughs each installment, but never really takes off. Which is a shame, because all the actors are really giving it their all, and there isn’t a weak link among them. All deserve to be on a solid series, so hopefully this will get there in its already-ordered second outing. Or maybe even its first, past episode one.

INTELLIGENCE is streaming now on Peacock, which you can watch via phone, browser, and only a few other devices, not including popular options like Roku and Amazon Fire.