Amazon recently released HUNTERS, a ten-episode drama about a group of Jewish people in the late 1970s hunting down Nazis hiding in America to take revenge for their wartime atrocities. From the mind of David Weil, this hyper-reality series picks a handful of things from history, and amps them up a la Inglourious Basterds, with plenty of shocking deaths in this cat-and-mouse spy game. It’s like The Americans, but way more fun (which is not a knock against that excellent series) because it’s a lot less concerned with accuracy.

The cast is very capably led by Logan Lerman (The Perks of Being a Wallflower) as Jonah Heidelbaum. Jonah lives with his grandmother, a survivor of the concentration camps, and his only remaining relative. But when she is mysteriously murdered in her home and Jonah doesn’t stop it, his mission to make up for his inaction leads him to a larger conspiracy. Jonah meets Meyer Offerman (Al Pacino, The Irishman, The Godfather) and his band of Nazi hunters. Despite Meyer’s best efforts, Jonah joins them in their quest, taking his grandmother’s place.

From the first scene, HUNTERS is gripping. A friendly cookout among co-workers goes wrong, and the result is something that very nearly crosses a line. From there, things only ramp up, as in the pilot alone, there are something like ten murders (most in a single scene). Each tends to be done with flair and dramatics, keeping one’s attention, even as it’s hard to know exactly when the next one is coming up. The pacing is quick, and the story flows smoothly.

There is a line one wouldn’t want to cross, and HUNTERS comes right up to it. The line I refer to is showing brutality towards children, which the show manages without being graphic the way it is in its treatment of adults. That restraint is appreciated, even if it’s clearly just for viewer sensibilities; the world isn’t any less realistic in the outcomes towards the youths.

Still, there’s a lot of violence, and without stating that it’s glorification, it is stylized entertainment. Much as the way the rest of the show is. As I said in the opening, HUNTERS operates on a hyper-reality, and from Florida wallpaper choices, to sitting positions in an alley, to a secret lair, much care has been taken to build something that feels just not-grounded enough to fully enjoy, without worrying about what might have really happened. There’s an air of fairy tale to it that keeps you from being bummed out by all the death, even as the frequent references to the Holocaust lend a sad undertone. The overall satisfaction is joyous, with those who have been wronged balancing the scales in their own ways, extralegal or not.

I love what I’ve seen of HUNTERS. It’s got some absolutely terrific performance moments in a pleasing package. I wouldn’t call it light entertainment; it threads a careful balance between fun and depth. Yes, it is prestige programming, and uses its period concept delightfully. But it also says something, and the specific point of view behind it makes it well worth the watch.

You can stream the entire first season now on Amazon Prime. 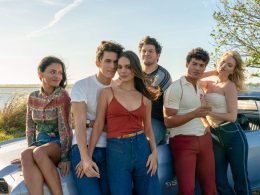