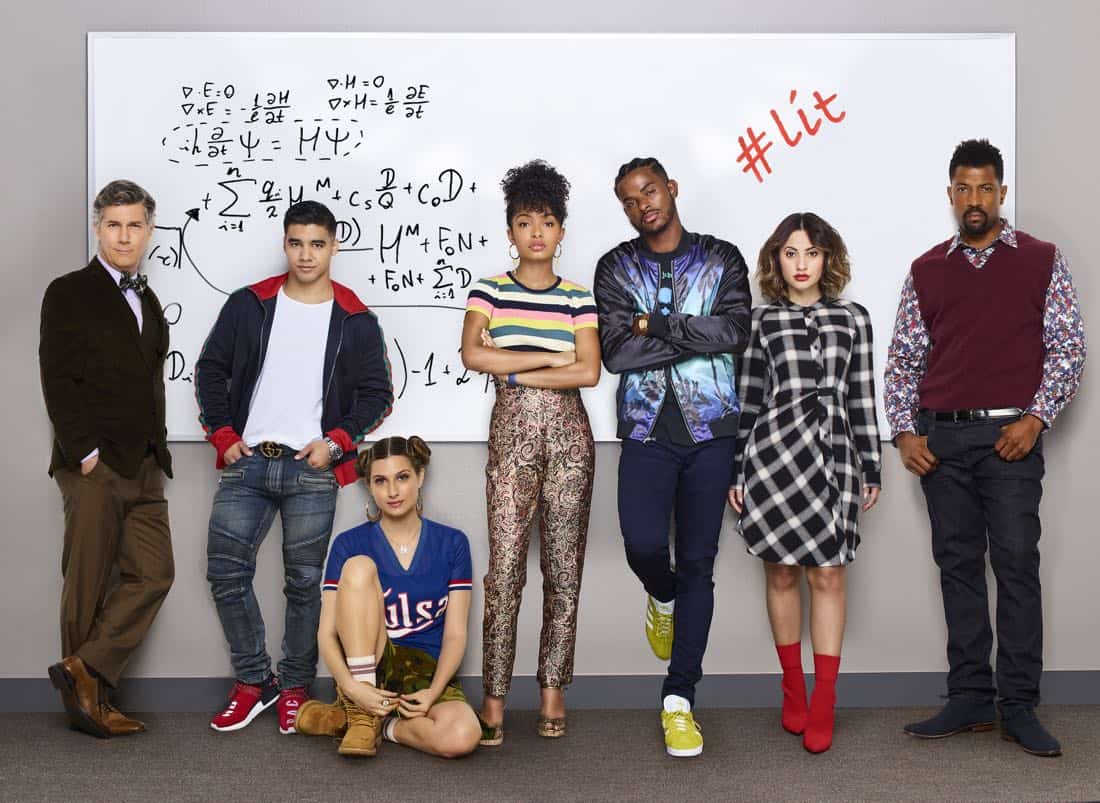 GROWN-ISH, a spin-off of the hit ABC sitcom Black-ish, premieres this week on Freeform. Centering around Zoey Johnson (Yara Shahidi) as she goes off to college, the series seeks to show a unique, yet familiar, point of view in the way that Black-ish does, albeit for a different demographic. It also looks to continue to be closely connected to the mother show.

Besides Zoey, who fans of Black-ish are already very familiar with, we are quickly introduced to the rest of the ensemble. There’s Nomi (Emily Arlook, Shitty Boyfriends), a closeted bisexual. Aaron (Trevor Jackson, American Crime) is super woke. Vivek (Jordan Buhrat) is far too obsessed with wealth. Luca (Luka Sabbat) is very fashionable. Sky and Jazz (R&B duo Chloe x Halle) aren’t as perfect as they pretend to be. It’s a more diverse, modern Breakfast Club, which Grown-ish goes to great pains to point out.

Many pilots go through meeting the various leads in hokey ways, bringing the main characters together in a single half hour through less than realistic means. Grown-ish sort of avoids that cliché by introducing Zoey to a new group of friends all at once, who happen to be in the same class as her, which makes sense.

However, Grown-ish still seems to feel the need to toss in the hokey circumstances. It details how each student ends up in a less-than-ideal midnight marketing class through zany sequences that prevent them from getting to the registrar in time. Thus, while avoiding the awkward setup initially, through flashback, it falls back into that familiar trap.

This is far from the only thing Grown-ish does wrong. The pacing is constantly interrupted by extended freeze frames, often with hashtags attached. The narration provided by Zoey is overacted and cheesy. Including fellow Black-ish character Charlie Telphy (Deon Cole) is a huge stretch that feels inauthentic. Chris Parnell (Saturday Night Live, Suburgatory) once again shows up as a goofy, out-of-touch authority figure; I love Parnell, but enough with this type for him, or characters on TV in general. A lot of the plot feels stilted and as predictable as it is uninteresting.

There are promising bits, though. The pilot has an important lesson to teach involving fellow student Ana (Francia Raisa, The Secret Life of the American Teenager), and it eventually does get around to it. It may be slightly preachy, but it’s something kids should see. There is a well-defined point-of-view from not just Zoey, but the other characters, too. The basic premise is relatable and has legs for at least a little while. Some plot twists keep things interesting. The backgrounds of some of the characters aren’t nearly as sanitized as one would expect from Freeform, the show being OK with flaunting illegality to serve realism.

I also like that Grown-ish seems determined to stay connected to Black-ish, keeping the world together. A brief cameo from Andrew (Anthony Anderson) promises more to come, which makes sense for a father-daughter relationship, especially when the college is geographically close to their home. Shahidi is supposedly still going to be recurring on the original. And Cole is apparently doing double-duty, starring in both shows at once.

But overall, I did not find the Grown-ish pilot very watchable. Sure, there are some good elements, and if they are developed further, focusing on those rather than other bits, there could be a decent show here. But the essential structure itself just doesn’t feel very well done, and some choices to inject off-tone humor distract from the cohesiveness of other threads. It might be moderately successful on the Freeform network, but I can’t see it really hitting a broad audience, or even bringing along much of the Black-ish following.