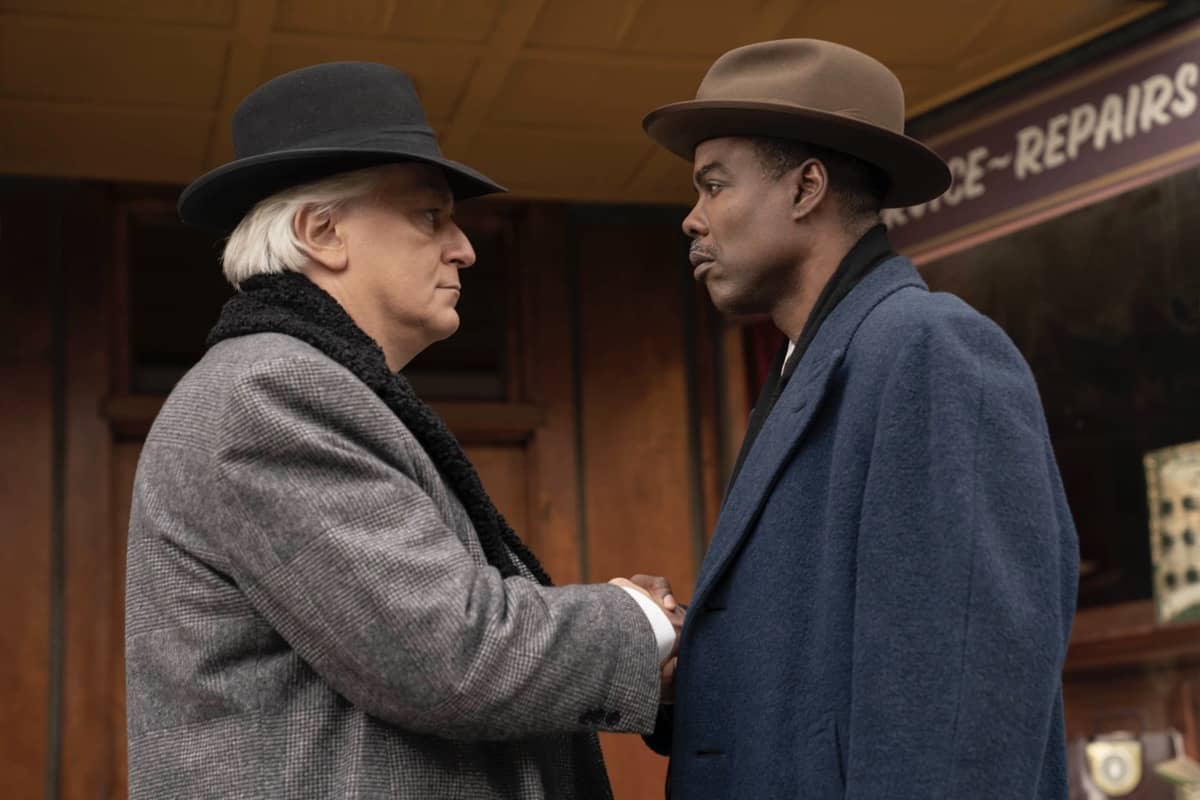 After a more-than-three-year drought, FARGO returns to FX for a fourth season. The latest installment in the anthology drama goes back to 1950 and is set in Kansas City, an oft-mentioned place in previous seasons, though not explored all that deeply. The story centers around two rival gangs, one African-American, one Italian, both considered minorities by the rest of the locals, as they try to gain control of illegal activity in the area.

As usual, FARGO’s season is in no hurry to get started, though the fourth season premiere provides quite a bit more historical exposition than previous openers. This may or may not be necessary, we’ll see as the rest of the run unfolds, but really sets up context for where this gang war comes from and how it might play out. Having glimpsed what the dominant faction becomes decades in the future, viewers will feel plenty prepared to get going by the time the title makes its appearance, about a third of the way into the premiere.

The gangs are stocked with plenty of familiar faces, as well as a few less so, as is FARGO’s custom, introducing us to new, terrific performers alongside talented veterans. Comedian Chris Rock (Saturday Night Live) heads one side as Loy Cannon, a family man whose people are not going to be pushed around anymore, and has ideas for legitimate business success if only a funder would take a chance on him. On the other side is Josto Fadda (Jason Schwartzman, Bored to Death), son of the long-time ruler who, at first glance, appears to be unable to live up to his father’s legacy, though he likely will surprise us. Standing out among the rest are Ben Whishaw (No Time to Die) as an Irishman who works for the Italians and Glynn Turman (House of Lies) as Loy’s elder advisor.

While gangsters are a staple of FARGO, three other types of characters usually make up the universe, as well. There’s the hapless person who sees themselves as good, but gets roped into the evil. This seems likely to be filled by mortician Thurman Smutny (musician Andrew Bird), though his daughter, Ethelrida (E’myri Crutchfield, The Kicks), has a larger part thus far, a rarity for a minor in the franchise. Second is the kooky weirdo, which is brillianty filled here with Nurse Oraetta Mayflower (Jessie Buckley, Chernobyl). And third is the noble member of law enforcement, which is completely absent from episodes one and two, though Marshall Deafy (Timothy Olyphant, Justified) may take up that mantle in the third hour.

By leaving out the cop, the fourth season of FARGO feels drastically different. The closest thing we have to a hero at the start is Ethelrida, but she’s not taking an active role in anything, and certainly won’t be solving any big cases. Funny that in a period piece, it’s this missing element that stands out more than sets or costumes as moving FARGO in a different direction.

I love the FARGO formula, and adored the first three seasons. I’m not sure it needed a shakeup, but perhaps creator Noah Hawley disagreed, as they really did follow the same pattern (delightfully) thrice. However, given the quality delivered previously, I’m excited to see what they’ve come up with this for the senior round, and hope for more in the future.

Only two and a half hours in (I plan to watch more as soon as possible), I am digging the differences and the tale unfolding. There are lots of interesting personalities, and while one major arc may be clear, there are undoubtedly many others slowly simmering that haven’t fully revealed themselves yet. The ending is only sort of known, given this year’s general tie-ins to other seasons, and it should be a fun ride.

FARGO returns Sunday, September 27th on FX and streaming the next day on Hulu.